But specialist galleries, who might expect up to 50% of their revenue to come from the annual event, still plan to host exhibitions this month 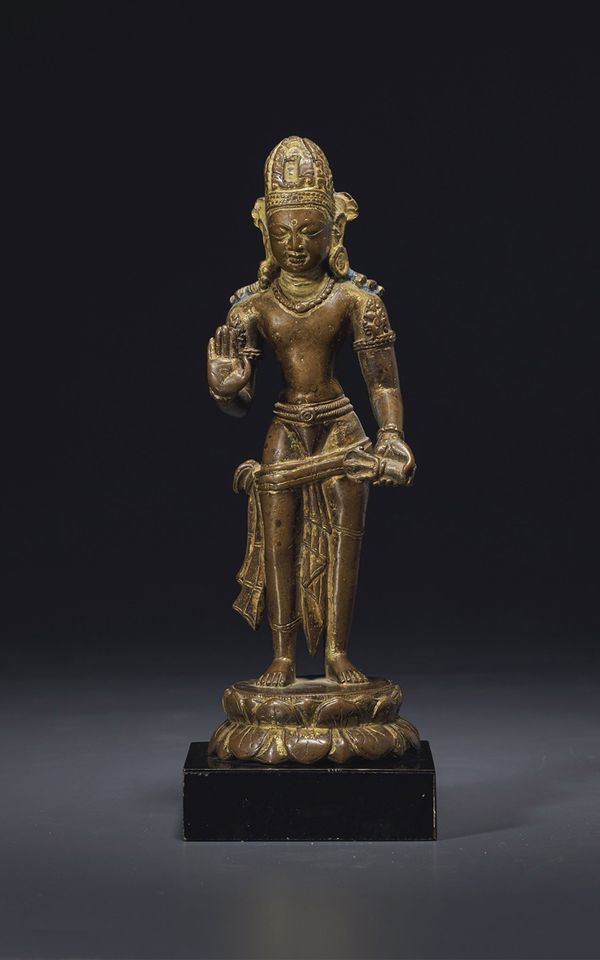 Christie's has moved most of its Asian art auction to June, including the sale of works from the collection of James and Marilynn Alsdorf, including this rare gilt-bronze figure of Vajrapani, from Nepal, Licchavi Period, 9th-10th century (est: $60,000-$80,000)

With the international art world shuffling to navigate the Covid-19 outbreak, New York’s Asia Week—the annual gathering of Asian art gallery exhibitions, talks, auctions, and special events, taking place 12-19 March—has made some adjustments as well. Namely, the six participating auction houses have decided to postpone the majority of their Asia Week auctions until the week of 22 June, and a cocktail reception at The Met originally slated for 16 March has been cancelled. While gallery events across the city will continue throughout the week as planned, many fear the knock-on effect of the delays, the virus’s increased spread throughout the US, and restrictions on both travel and large gatherings may hurt attendance.

“I think that attendance will be different this time,” says Katherine Martin, the chairwoman of Asia Week. “In the past few days, some people have let me know they can’t make it to New York, but at the same time, I’ve heard from others who have decided that they will come to the exhibitions—mostly locals, because they had international plans that were cancelled. Now they’ll be in New York and are happy that they can see the shows.”

As for re-scheduling the auctions to June, Martin noted: “The international art calendar is very full, so it’s hard to do something like this. The auction houses wanted to put it at the end of the spring auction season and I think this is the best window they could find, though I don’t suppose there were an awful lot of options.”

Of the 15 sales that the two main auction houses were going to hold in March, just three have been kept on their original dates—two at Christie’s and one at Sotheby’s, and all of Indian and South Asian art. The other auction houses involved in Asia Week, including Bonhams, Heritage, Doyle and iGavel Auctions, have postponed all of their Asia Week programming until June. During last year’s Asia Week sales, Christie’s made $79.9m from its eight Asia Week auctions, while Sotheby’s brought in $45.7m from the same number of sales. Neither Sotheby’s nor Christies has made their estimates for the rescheduled sales public.

“We believe these are the right decisions to take now to ensure the best sale environment on behalf of our consignors and our clients,” a Christies spokesperson says, adding that this was a decision based on the health and safety of their clients and staff. The auction house made a similar decision in 2003, when they moved their Hong Kong spring sales from April to July in light of an outbreak of the related SARS virus. Those rescheduled sales still made roughly $52m, which was Christie’s second highest total for a Hong Kong auction series at the time. Representatives from Sotheby’s and Bonhams declined to comment on the current epidemic beyond statements announcing their updated schedule.

This isn’t Sotheby’s only shake up related to the virus, however; in late February the auction house announced that it would relocate its April Hong Kong auctions to New York, and that its June London sales would be shortened from two weeks to one, so that it may ease otherwise clogged calendars. Galleries stick it out

Asia Week also brings in substantial revenue for the specialist galleries that participate in the event. “When we are fortunate enough to have been able to find and present a fine collection of Chinese art, the percentage of our annual revenue derived from Asia Week activity may be as high as 50%,” says James Lally, whose gallery J.J. Lally & Co., will be taking part in Asia Week. “In my experience the crucial factor which determines annual revenue is the supply of fine quality art works,” Lally adds.

The galleries participating in this year’s festival—two thirds of which are based in the US—will continue to hold their exhibitions as planned. “We are open and welcoming visitors while taking sensible precautions and washing hands frequently, but attendance at the gallery has been much reduced,” Lally says. “During the recent days, as various institutions have cancelled events or closed their doors, we have heard from good friends and clients who are cancelling plans to come to New York and we have seen significantly fewer visitors. In short, the pace of business now feels like mid-summer, not the normal high season Asia Week.”

The impact of the US import tariff certainly has reduced buying of Chinese art by US residents at overseas fairs and actions James Lally, Asian art dealer

Amid this uncertain state, the Asian art market has already been hit by another, more political, pestilence: Trump’s tariffs waged against China, and the chaos surrounding them. The tariffs “made it difficult for some of our usual exhibitors to make the decision whether or not they would come and participate in 2020,” Martin explains. “If you’re primarily handling Chinese art, and you’re trying to sort out how to acquire or import it, it was a deterrent and also a moving target—an unknown variable because it was unclear if it would go into effect, when it would go into effect, when they would back away from it. A lot of start and stops.” Martin added that the tariffs made it “very difficult for some of the exhibitors to decide what to do, and a few decided not to come.”

“The impact of the US import tariff certainly has reduced buying of Chinese art by US residents at overseas fairs and actions, but the magnitude of the impact is very hard to measure,” echoed Lally. “It seems to me that during the last many months of tariffs, uncertainty and bureaucratic aggravation, most US collectors, curators and dealers have hit the pause button, but the hard core collectors wake up immediately when a good object or a genuine opportunity appears.”

When asked how the virus might affect the Asian art market, Morgan Long, senior director at London’s Fine Art Group, says: “Unfortunately the current health situation in Asia will have stronger consequences than just the cancellation of Art Basel Hong Kong and some postponed exhibitions and auctions.” Long notes that limited travel “will start to restrict the cultural flow and open exchange that we have seen flourishing over the past few years,” adding that, “the uncertainly around the general situation could also leave a wide gap in programming which could take some time to recover.”

But despite the uncertainty, Asia Week’s chairwoman remains hopeful. Because the fair is spread out among multiple locations rather than taking place in one major hub, it remains “a calm setting, one in which we’re not physically cheek to jowl,” Martin notes. “I think that’s one of the reasons why people will still go to the galleries. You can look at the art in an environment that feels comfortable and you’re not pressed up against one another.”

Martin added that educational talks are still proceeding as scheduled, with some additions even popping up that are detailed on the website, and that an Asia Week catalogue has been published, which will aid in accessibility for those who cannot physically be present in New York. “Art dealers are scrappy by nature, and everybody is here to make it happen,” Martin says. “Our eyes are wide-open and we realise that this is a different situation and a different Asia Week, and I’ve been really heartened by how high morale has been amongst the dealers.”