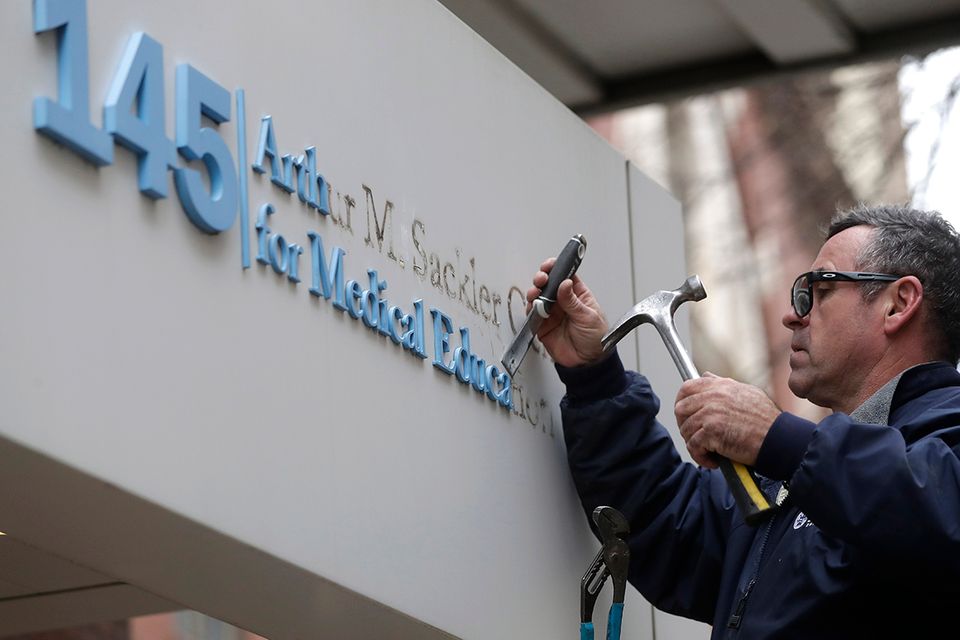 Tufts University announced today that it was stripping the Sackler name from its buildings and programmes in recognition of “the human toll” of the US opioid epidemic, which has been tied directly to the philanthropic family.

The Sacklers’ company, Purdue Pharma, which manufactures and markets the prescription painkiller OxyContin, has been blamed for an addiction crisis that has resulted in the deaths of hundreds of thousands of Americans since the drug’s introduction in 1996.

Peter R. Dolan, chairman of Tufts’ board of trustees, and Anthony P. Monaco, the president, said in an open letter to the university community in Medford and Somerville, Massachusetts that the institution had reached its decision after a review commissioned in February, followed by “long and thoughtful deliberations”.

“Our students, faculty, staff, alumni, and others have shared with us the negative impact the Sackler name has on them each day, noting the human toll of the opioid epidemic in which members of the Sackler family and their company, Purdue Pharma, are associated,” the letter said, adding, “It is clear that the Sackler name, with its link to the current health crisis, runs counter to the school’s mission.”

The officials said the name would be removed from the Sackler School of Graduate Biomedical Sciences, the Arthur M. Sackler Center for Medical Education, the Sackler Laboratory for the Convergence of Biomedical, Physical and Engineering Sciences, the Sackler Families Fund for Collaborative Cancer Biology Research and the Richard S. Sackler, M.D. Endowed Research Fund.

A series of art institutions, including the Metropolitan Museum of Art, the Solomon R. Guggenheim Museum and the Tate in London have announced in recent months that they would stop taking donations from the Sacklers, and the Louvre in Paris has stripped the name from its Sackler Wing of Oriental Antiquities.

The Sacklers’ philanthropic relationship with Tufts dates back to the 1980s and is particularly concentrated in the medical field. The university said it was not “seeking to erase this chapter of Tufts’ history” but rather “contextualising the involvement of family members over the years”. It emphasised that contributions from one family member, Arthur M. Sackler, had supported the university’s mission of “scientific research and medical education to improve people’s lives”.

It noted that Arthur M. Sackler died in 1987, nearly a decade before Purdue Pharma introduced OxyContin. The letter said that the university planned to create an exhibit inside its medical school to describe the Sackler family’s involvement with Tufts and “to educate the community about lessons we all must learn from the opioid epidemic”.

The letter said the review assessing Tufts’ relationship with Purdue Pharma and the Sacklers, conducted by a former US attorney for Massachusetts and a lawyer, had found no wrongdoing by the university or its staff and no evidence that the Sacklers agreed to fund programmes or research in return for “certain outcomes”.

Still, it said, “there was some evidence suggesting the appearance of influence, in that Tufts officials at times may have provided favoured treatment to the Sacklers and Purdue or acted to avoid controversy related to them”.

The university said it would act “as soon as possible” to adopt other steps recommended by the reviewers, including introducing stronger screening procedures for donors. It said that it was also establishing a $3m endowment to support a programme aimed at preventing and treating drug addiction and substance abuse.

An attorney for the Sackler family criticised the decision to remove its name from buildings and programmes. “We will be seeking to have this improper decision reversed and are currently reviewing all options open to us,” the attorney, Daniel S. Connolly, told The New York Times.

The artist Nan Goldin, who has led opioid-related protests at New York University and Harvard University as well as at museums to urge them to renounce the Sacklers, welcomed Tufts' announcement. "It’s excellent–we’re really surprised and gratified," she said. "We weren’t expecting it. We’re sure this had a lot to do with student pushback."