Organisers of the three-day action, the group BP or not BP?, called it the "largest protest in the history of the museum" 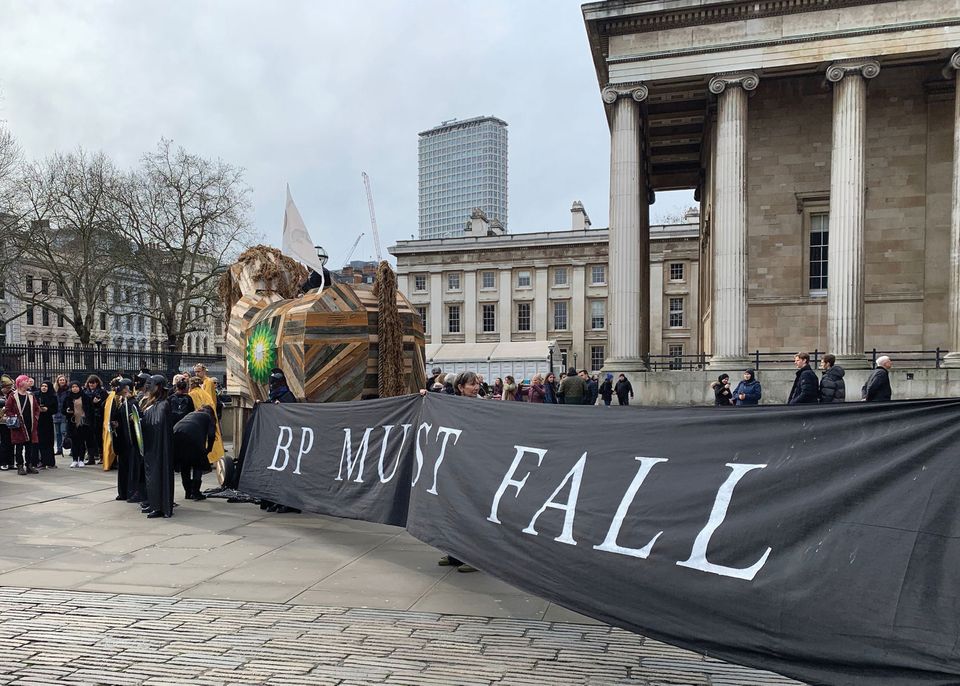 Climate activists calling on the British Museum to cut ties with its longstanding corporate sponsor, the oil and gas giant BP, ended their 51-hour occupation of the London museum on Sunday morning after a day of mass demonstrations.

It was the “largest protest in the history of the museum,” according to the organisers of the event, the activist group BP or not BP?. They estimated the number of participants on Saturday at “around 1,500”, although a museum spokeswoman put the figure in the “high hundreds”.

Whatever the exact numbers, the protest amounted to an unprecedented takeover of a UK national museum, with several galleries occupied by campaigners for speeches, singing and processions. The mood throughout was upbeat, almost celebratory, with spontaneous chants of “BP must fall” erupting throughout the occupied spaces and theatrical processions winding their way through the museum’s galleries and public spaces. 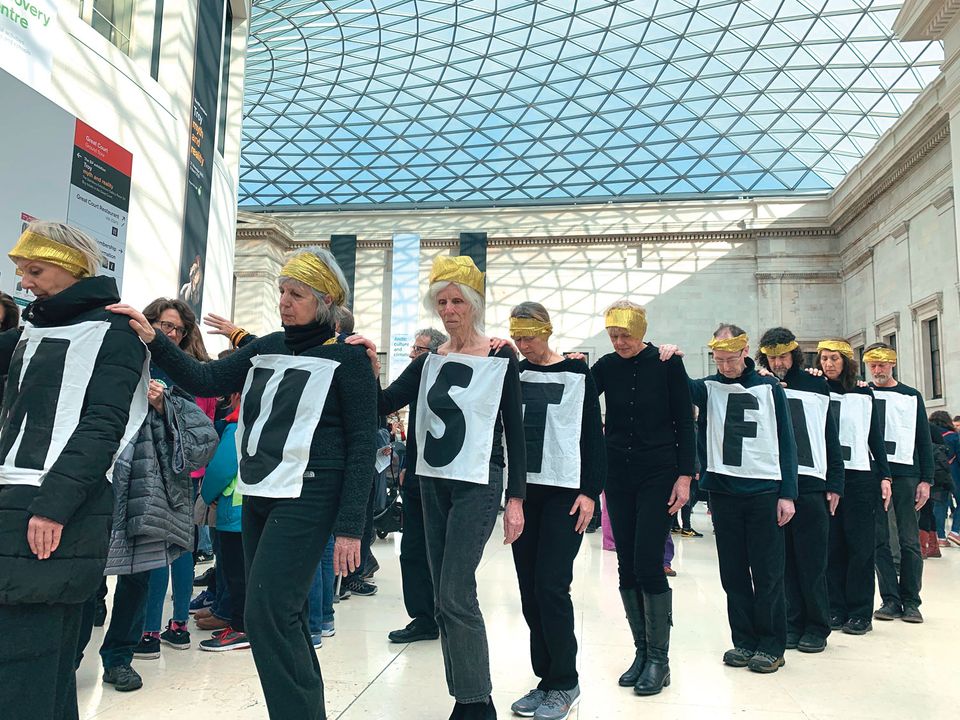 International activists gave talks condemning BP for working with repressive regimes including speakers of Kurdish and Turkish descent who denounced the oil and gas firm’s “heart-breaking” collaboration with the Turkish president Recep Tayyip Erdoğan to build the Trans-Anatolian pipeline through the country.

Speaking in a gallery displaying sculptures from the Mausoleum at Halicarnassus in modern-day Turkey, the photojournalist Bayryam Bayryamali said: “BP has been working for more than a decade with an anti-egalitarian government which imprisons dissenting voices, endangers the lives of LGBTQI+ citizens, puts the lives of women at risk by not providing safe abortions and disenfranchises the Kurdish and Roma communities.”

Others evoked the mistreatment of indigenous peoples and the exploitation of natural resources. Raki Ap, a founder of the Free West Papua independence movement, spoke about millions of acres of forest in the former Dutch colony—now part of Indonesia—being flattened through logging, mining, palm oil production and other agri-industrial initiatives (that are not connected to BP).

The three-day action began early on Friday morning when protestors smuggled a 13ft-high Trojan horse into the courtyard in front of the museum’s main entrance. The horse was inspired by the museum’s current BP-sponsored exhibition Troy: Myth or Reality (until 8 March).

On Saturday, protestors spread through the museum before gathering in the Great Court to sing “BP must fall” while tearing up leaflets emblazoned with the BP logo. Around 40 activists then refused to leave the building at closing time and spent the night in the Great Court. They finally exited the museum at 10:30am yesterday morning. 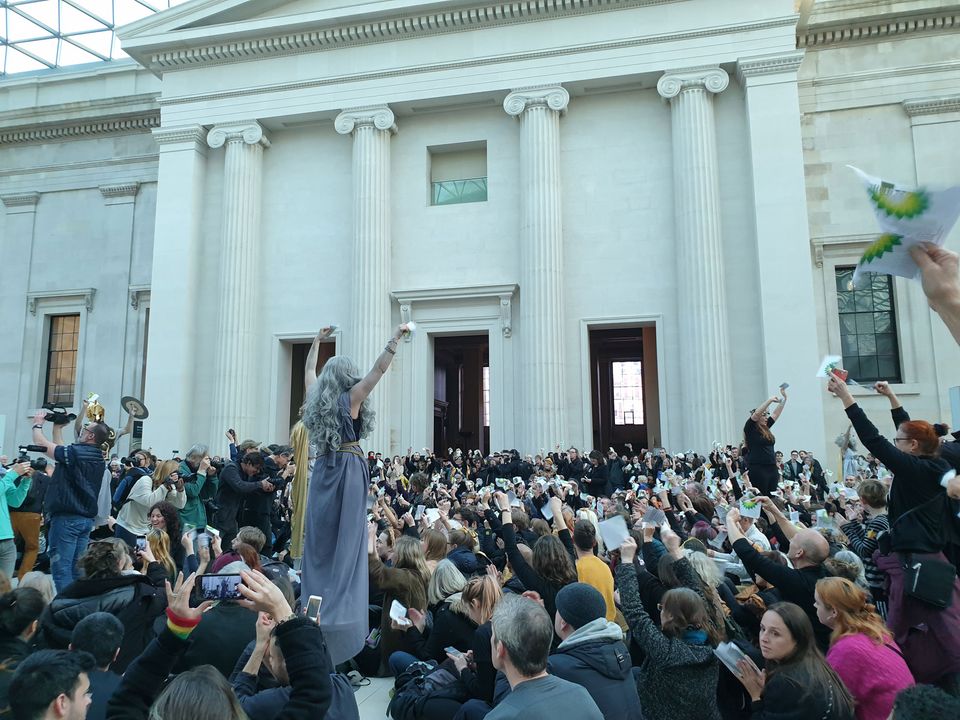 Saturday's action culminated in a crowd singing "BP must fall" while tearing up the energy firm's logo in the museum's Great Court Photo: Hannah McGivern

The activists left behind a sculpture entitled Monument, which they created overnight by casting their own body parts. The work “symbolises the growing movement opposing the climate-crashing business plans of fossil fuel firms such as BP”, they said in a statement.

Speaking to The Art Newspaper on Saturday, Malou den Dekker of BP or not BP? said: “We’re here because even though we’re in a time of climate crisis, the British Museum is still choosing to partner with BP, which is unacceptable as BP is complicit in the climate crisis. It is absolutely outrageous that BP can essentially buy themselves really cheap advertising at a leading cultural institution. The Tate, the Royal Shakespeare Company and the National Theatre have all proven that they can find sponsorship elsewhere.”

BP ended its sponsorship of Tate in 2017 following repeated protests by environmental campaigners at Tate Modern and Tate Britain. Last summer, the Royal Shakespeare Company announced that the energy firm would no longer sponsor its £5 ticket scheme for young people, while the National Theatre said in October that it would stop accepting funds from the fossil fuel firm Shell, a corporate member, from June 2020.

“A huge wave of people is waking up to the sense that something needs to happen to fight climate change. Public support for oil sponsorship is declining. The more people come out and show that they won’t stand for this sort of sponsorship, the more pressure they will put on places like the British Museum. The longer the British Museum waits to cut its ties to BP, the more outdated it will seem. It’s only a matter of time before they decide it’s not worth siding with BP,” Den Dekker said.

For now, the British Museum is standing by its corporate sponsor. In a statement, the institution’s director, Hartwig Fischer, said: “the museum is a public space where people can come to debate and we respect other people’s right to express their views. We share the concerns for the challenges that we all face together as a result of climate change. We address these issues in an innovative way through significant exhibitions and public programming. The British Museum offers for millions of people an extraordinary opportunity to engage with the cultures and histories of humankind. Without external support and sponsorship this would not be possible. Removing this opportunity from the public is not a contribution to solving the climate crisis.”