Climate change is the hot topic

As waters rise, Miami is on the front line of global warming

One of the most curious objects at Art Basel in Miami Beach is a glowing yellow vitrine that looks fresh from a mad scientist’s laboratory. Inside, a continuous stream of water pounds against a rock, slowly eroding it to nothing. The Los Angeles-based artist Carl Cheng created these machines in 1969 “to represent how nature works” in a future that could be completely manmade, says Mary Leigh Cherry of the gallery Cherry and Martin, which is offering two of them for $30,000 each.

Outside the Convention Center, that future has already arrived. The rise in the sea level in South Florida has tripled in the past decade, eroding Miami Beach’s shoreline so quickly that the city has started to import sand from a mine 100 miles north to restore it. “There is no Miami Beach unless we build it,” Rob Young, the director of the programme for the study of developed shorelines at Western Carolina University, told the Verge website earlier this week.

South Florida’s cultural institutions are also reckoning with climate change. George Lindemann, the board president of the Bass, says that environmental concerns have “unequivocally” informed the museum’s acquisitions strategy. “Clearly, we are not the institution to collect delicate watercolours on paper,” he says. By contrast, the Bass has permanently installed Ugo Rondinone’s stone totem Miami Mountain (2016) on its front lawn. The monumental work could survive a tornado, flood or hurricane, Lindemann says.

Meanwhile, the Robert Rauschenberg Foundation is drawing up a plan to address rising tides at the artist’s former compound in Captiva, Florida. According to a report released in May, “the entirety of the property is at high risk of storm surge flooding” and a significant portion is likely to be underwater by 2045. “We may move buildings off the ground, create walkways… we have to look at what is feasible,” says Ann Brady, the director of the foundation’s residency programme. 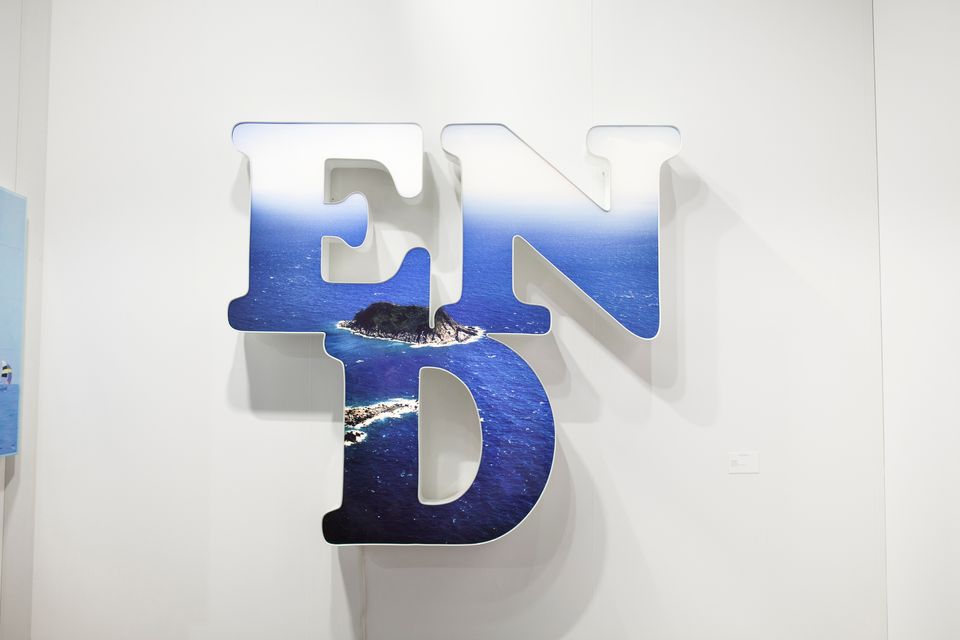 Although these threats can seem remote from inside the comfortably dry confines of the fair, some works offer potent reminders. Maya Lin’s Silver Pearl (2015), an outline of the Pearl River in China cast in recycled silver, is part of a series about endangered waterways. (Pace sold the work, priced at $150,000, to a US collector.) Less subtle is Doug Aitken’s 2012 light box at Berggruen gallery ($250,000), in the shape of the word “End” with an aerial photograph of an island surrounded by water.

Other works on show in Miami this week focus on the human toll of pollution and environmental disaster. At Art Basel, the yellow plexiglass placed over works on paper by Shinro Ohtake at STPI ($40,000) refers to radiation in the wake of the Fukushima earthquake and tsunami that damaged a nuclear power station in 2011. At the Untitled fair, Balzer Projects is presenting a 2016 video by the artist Brian Duggan ($2,400), which uses footage of a Japanese fishing boat that remained afloat for a year after the catastrophe.

Art can feel insignificant in the shadow of such grave issues, but the Brazilian artist Beto Shwafaty maintains that artists can put a human face on a problem that is often reduced to statistics. Shwafaty’s solo presentation at Prometeo Gallery includes a map of Brazil with the Amazon rainforest erased, accompanied by a newspaper clipping of an indigenous person in a boat ($7,000).

“My provocation is that maybe the only way to preserve the Amazon is to forget about it,” he says. “I wouldn’t dare say that art can create a solution to these problems… [but] I can point to questions that nobody else can. A scientist can’t say what I say.”

Writing in the Miami Herald this week, Lindemann encouraged cultural institutions—including art fairs—to take climate change seriously. “It’s time to ask what the art community is doing business-wise and ethically to manage the consequences of changing climate patterns,” he wrote. “According to press reports, Burning Man generates an estimated 27,000 tons of greenhouse gas. What about Art Basel in Miami Beach?”