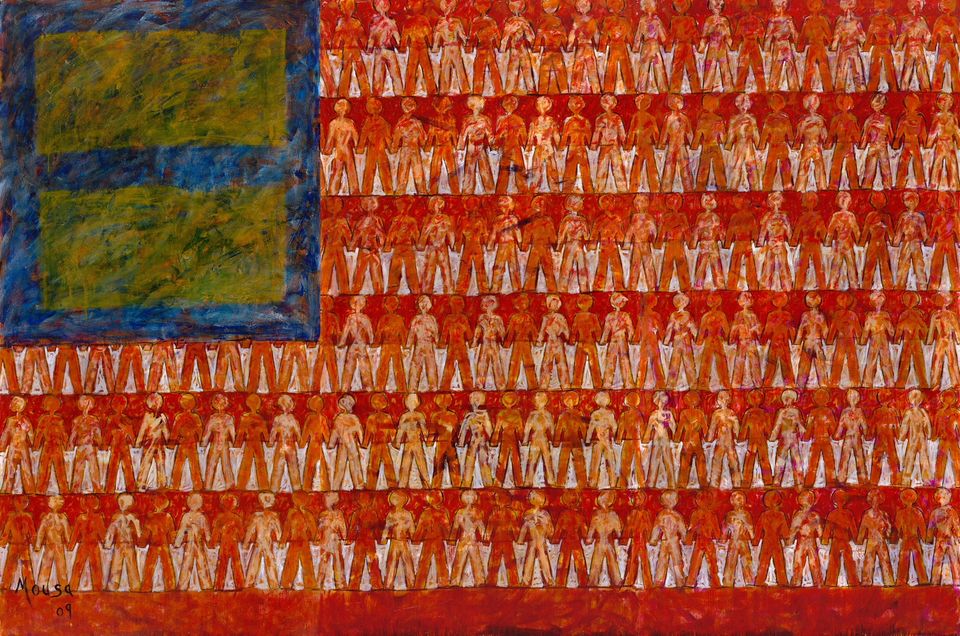 Nabil Mousa, an Arab-American artist born in Syria, says he is making a stand for “closeted gay Arab and Middle Eastern men and women” via his series of inflammatory works depicting same-sex couples on show at the Arab American National Museum in Dearborn, Michigan (American Landscape: An Exploration of Art & Humanity by Nabil Mousa; until 8 April). The exhibition focuses on what it means to be an LGBT artist of Arab descent in America today, a place where Mousa says he is made to feel “substandard”.

The Atlanta-based artist, aged 51, emigrated from Syria to the US with his conservative Christian parents aged 12. “When we moved to the United States, I become involved with Jehovah's Witnesses. I was taught that I was dead in the eyes of God if I was gay,” he says. Most of his family subsequently disowned him. He took art classes at the University of Tennessee, but has no other formal art training. In a surprise move, he is in discussions to show his work at Moscow Museum of Modern Art (Russia has a law banning “gay propaganda”).

Mousa’s American Landscape #1 (2009), one of nine paintings on show in Dearborn, depicts the US flag emblazoned with same-sex pairs holdings hands. “This is a very sensitive subject and it is never easy to write or talk about,” he says. “I have met so many closeted gay Arab and Middle Eastern men and women who have said please keep doing what you are doing.”

Homosexuality remains illegal in most countries in the Middle East, and is punishable by death in Iran and Saudi Arabia. “I got a lot of positive feedback specially from the Middle East countries. Most of the likes [on social media] are coming from the Arab community abroad,” Mousa says. The works are painted orange, a reference to the coded terror warning system introduced by the former president, George W. Bush in 2002 (the orange level was the second highest colour code). “Orange references fear and ignorance,” the artist says.

A museum spokeswoman says that a visitor commented in the gallery book that “we don’t need to be talking about this”. She adds, however: “This pales in comparison to the many very positive visitor comments we have logged.”