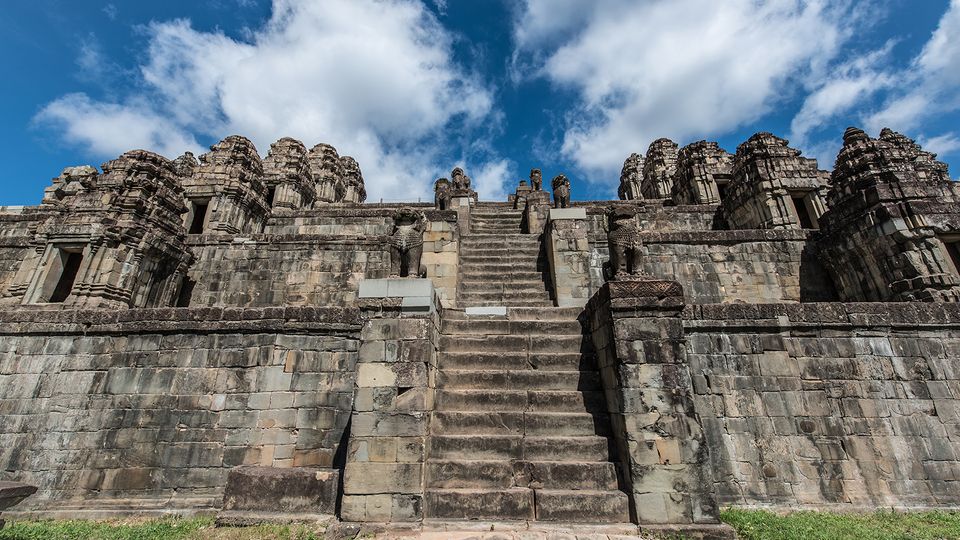 The Phnom Bakheng temple at the Angkor archaeological park in Cambodia

The World Monuments Fund (WMF) is celebrating a milestone in its ongoing work at the Angkor archaeological park in Cambodia: the completion of a decade-long $4.8m conservation effort on the eastern side of Phnom Bakheng, one of the site’s oldest temples.

Constructed as a stepped pyramid atop a hilltop in the late ninth and early tenth centuries, it was the state temple of the first Khmer capital and is considered one of the world’s greatest architectural treasures. Angkor was the seat of the Khmer Empire from the ninth to the 15th century.

In recent decades a shift in the flow of water across Phnom Bakheng amid heavy tourist traffic had jeopardised its long-term viability, prompting the WMF to seek a solution. Devotional shrines erected on the various levels had become destabilised because of a gradual change in the pitch at the ground level of the various terraces, says Lisa Ackerman, the interim chief executive of the WMF. 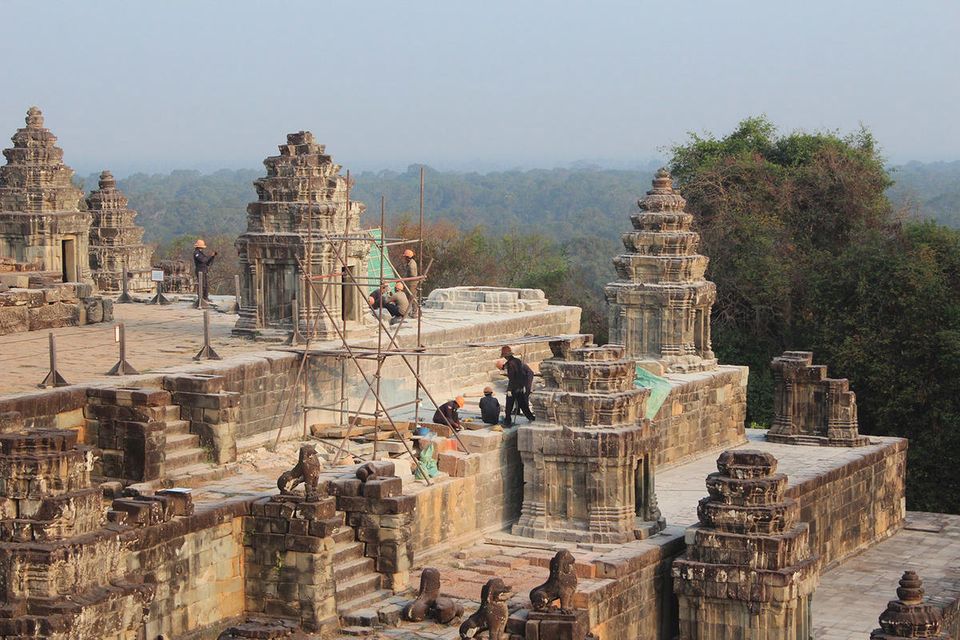 After detailed studies beginning in 2004, the fund set out in 2008 to stabilise and restore the site by “deconstructing all of the terraces and repitching them so that the water rolled in the direction we wanted”, she explains. “It was really a complicated jigsaw puzzle.”

Using two cranes, a team of 80 to 90 conservation technicians removed hefty terrace stones­–some weighed as much as 600 pounds–and waterproofed the foundation by laying a PVC membrane atop the dirt, Ackerman says. Then the stones were cleaned and put back, sometimes with slight retooling, along with new stones retrieved from the side of the hill at Phnom Bakheng and inserted in places where stones had been lost.

Recreating the dynamics of the water flow involved channeling the thinking of the original inhabitants of Angkor in the ninth and tenth centuries, Ackerman says. “As places evolve, we sometimes lose touch with original systems that were put in place, “ she points out. “You don’t know the terrain as well as the original inhabitants did. It takes standing there in a rainstorm to understand the problem.”

The next challenge is to embark on the restoration of the western half of Phnom Bakheng, which could take eight years including the research and planning phase, Ackerman says.

A ceremony this week marking the completion of conservation of the eastern half was also a 30th-anniversary celebration for the WMF, whose work at Angkor began with a 1989 field mission and has expanded so far into a $15m investment. Among the early reckonings was the discovery of a void in expertise, given that the site’s caretakers had fled or perished along with many educated Cambodians under the murderous rule of the Khmer Rouge from 1975 to 1979. Gradually the fund has recruited and trained conservation technicians and other specialists who live in Angkor’s villages.

Other projects overseen by the WMF at Angkor include the conservation of the Preah Khan temple complex, the Churning of the Sea of Milk Gallery within Angkor Wat and the Ta Som temple.