Or does the title belong to a crypto work by Pak, recently acquired by a Sotheby's specialist? As sales of NFT art continue to rise at a frenzied pace, artists are racing to claim stakes in the uncharted territory of blockchain-based work. Among them is the Russian provocateur Petr Davydtchenko, who is selling a digital recording of a performance piece in which he eats a live bat outside of the European Parliament building in Brussels—the first ever NFT performance work, he claims.

Available via the OpenSea digital marketplace, the video has a reserve price of $4,202. So far only one bid has been made for the one-off collectible digital artefact, at 2.5 wrapped ethereum (WETH) which is valued at $3,848 at the time of publication.

The work is a statement against "the depravity of pharmaceutical companies" during the coronavirus crisis, Davydtchenko tells The Art Newspaper. He shares the credits for the NFT work with the city of Brussels, whose police authorities swiftly arrested the artist (easily identifiable by his recently acquired "Pfizer" face tattoo) after he consumed the animal on 17 February.

“We took him to the police station, did a control check and there was no animal, so there was no action,” a spokesperson for the Brussels police said in a statement to The Art Newspaper. They did not elaborate on Davydtchenko's claims that they "searched for the bat in [his] ass".

This is not the first time Davydtchenko has consumed a live bat in the name of art, having devoured another in June in an attempt to create and distribute an "ethical" coronavirus vaccine. Davydtchenko has previously likened his artistic practice, for which he eats and occasionally performs sex acts on roadkill, to cryptocurrency. "NFTs create alternatives to the existing economic system. This is the same as myself, by the analogy of decentralised currency I choose an alternative way of existence," he says.

Davydtchenko discussed the benefits of creating cryptocurrency based-art on Monday, via the audio chat mobile app Clubhouse, alongside the dealer and writer Kenny Schachter. "Radical performance art should be aligned with a progressive community, as it has been completely let down by the traditional and outdated art market," Davydtchenko says.

But Schachter is less convinced that the work can actually be considered performance. "Looks like video art to me," he tells The Art Newspaper. "God bless him, rather, god bless the animals he ruthlessly keeps killing. What percentage does the bat get?". 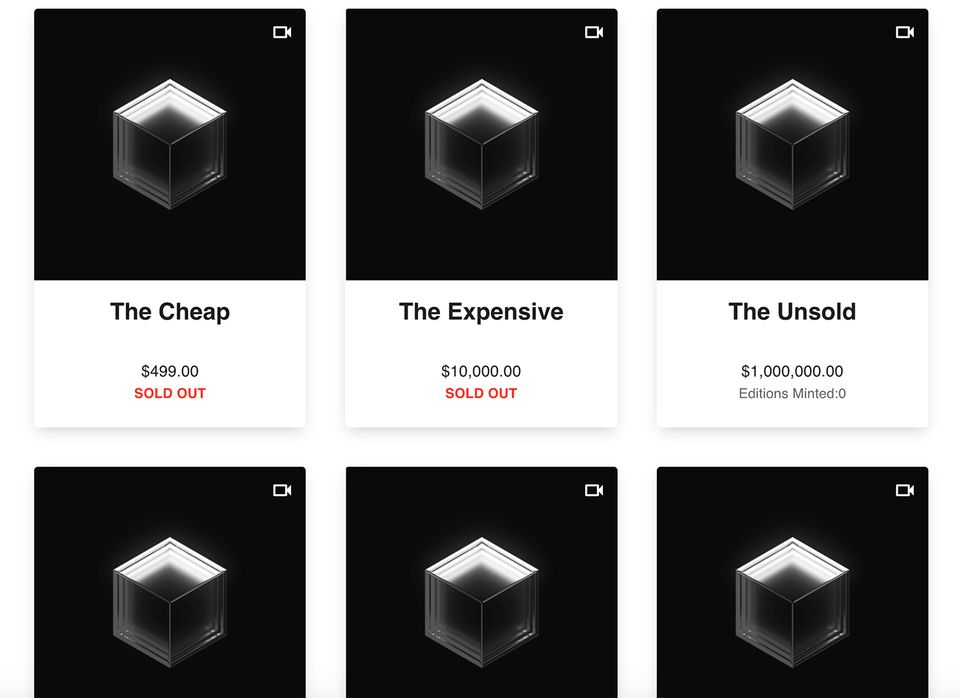 Pak's The Title is available to purchase via NiftyGate © Niftygate

Moreover, whether or not the work is classified as performance art, it might still not be the first. Earlier this year, the anonymous artist Pak, who ranks only behind Beeple for total global NFT art sales, tweeted to offer an edition of their work The Title (2020) to an auction house. The work was acquired by Max Moore, Sotheby’s co-head of the Contemporary Art Day Sale in New York. Sotheby's confirms that Moore bought the work, but he declines to comment.

The Title's premise comments on the questions around authenticity and artistic value that have been raised by NFTs. Different versions of the exact same image were sold at wildly varying prices, ranging from $0 to $1m for an edition labeled The Unsold (which, fittingly, remains unsold). The work, in consisting of multiple sales and deriving its artistic meaning from participation with its buyers, has led to some media reports suggesting that it could be considered an event, as well as the first instance of NFT performance art. Whether this is the case hinges on the intentionally unclear answer to the question—is The Title its image or its concept?

"The field is shifting so fast and is an undefined matrix so categorisation can also hinder new possibilities for art" Melissa Gilmour, NFT curator

The difficulty of determining a clear definition for what could be considered a performance art NFT suggests not only that the language used to explain their market is still being formed, but also that it is unlikely to be understood through traditional art historical terms.

"Art is both an object and a process in the NFT space," says the NFT art curator Melissa Gilmour. "The Pak event is an example of how programmable layers create new possibilities for art and the convergence of digitised art and performance means both can ultimately become an object in time that can be sold and traded. Perhaps it is more process art than performance art."

Gilmour also calls into question whether defining genres of NFT work is even useful. "The field is shifting so fast and is an undefined matrix so categorisation can also hinder new possibilities for art," she says.

Indeed, while agreeing that Davydtchenko's work can be considered a performance art NFT, Gilmour underlines that the more important point lies in the potential that NFT-based art offers the creative process. "Now he minted the piece he has total ownership and freedom from censors," she says. "He can make an impactful piece based on a strong belief. He can sell his NFT of the performance and tracks the provenance of the piece as that strong belief gets shared around the world."