Lostart.de is caught between the conflicting demands of claimants and the holders of disputed art 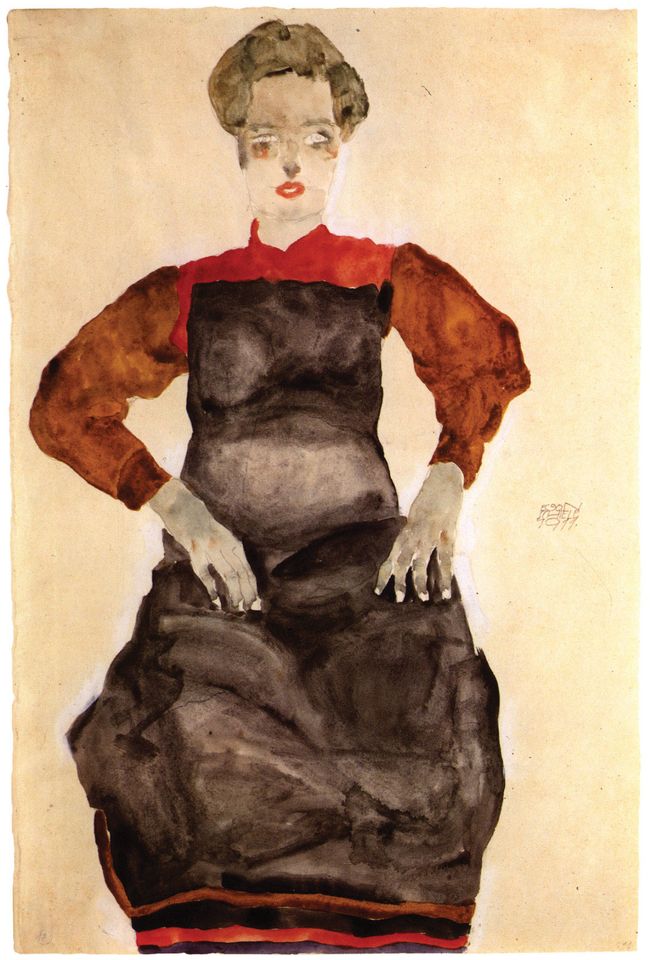 The disputed Woman in a Black Pinafore (1911) by Egon Schiele. At the request of three dealers, lostart.de removed 63 works by Schiele claimed by the heirs of Fritz Grünbaum, who perished at Dachau Courtesy of Collection Grünbaum

A German court has ruled that the current possessor of a work of art cannot stop a claimant from registering it on a government database of Nazi-looted art in the latest in a series of legal challenges to listings on lostart.de, a German website designed to help victims and their heirs recover cultural property lost due to Nazi persecution.

In 1999, Wolfgang Peiffer, a collector from Baden-Baden, bought a painting of a Sicilian landscape by Andreas Achenbach at auction, unaware that it was sold in 1937 by the Jewish dealer Max Stern, who was forced by the Nazis to liquidate his Dusseldorf gallery and flee Germany. The Max Stern Art Restitution Project listed the painting with lostart.de in 2016. But Peiffer has rejected requests to return Sicilian Landscape (1861), saying he believes Stern sold it in a “perfectly normal gallery transaction”.

Peiffer’s lawyer, Ludwig von Pufendorf, filed a suit in 2018 at the Magdeburg regional court, asking it to ban the Stern estate from claiming ownership of the painting or registering it on lostart.de. The listing makes the painting “unsellable in practical terms”, the plaintiff contended. Last year, the court dismissed the complaint, saying a listing on lostart.de did not constitute an ownership claim. But Peiffer has appealed the ruling.

“If the plaintiff is successful, everyone who posts a loss on lostart.de would be exposed,” says Ulf Bischof, the lawyer representing the Max Stern Art Restitution Project.

Lostart.de is administered by the government-run German Lost Art Foundation. It has on several occasions been caught between the conflicting demands of claimants and the holders of disputed art—and has been the target of two lawsuits. To qualify for the database, an entry must pass a “plausibility assessment”. The foundation does not itself conduct provenance research into the items listed and relies on evidence presented by claimants.

The first legal case against lostart.de was eventually unsuccessful. In 2015, the Federal Administrative Court overturned a previous court ruling ordering lostart.de to delist a portrait of an elderly man in Oriental dress attributed to Rembrandt’s circle that surfaced in Namibia. The current holder and one group of heirs had agreed to sell it and split the revenue.

There was, however, a second group of claimants. The pre-war Jewish owner of the work had sold it under duress to a Jewish banker, who was expropriated by the Nazis. Lostart.de refused to remove the listing without the approval of both sets of heirs, meaning the planned sale could not take place. The federal court upheld lostart.de’s right to continue listing the painting “because it contains factually correct information about an ongoing suspicion that it is looted art”.

Claims by heirs against private individuals to recover art invariably fail in German courts. The current holders are protected by statutes of limitation and a rule called Ersitzung, under which a good-faith buyer who has held a work of art for ten or more years gains the right of possession. Settlements can be negotiated on the basis of the 1998 Washington Principles on Nazi-looted art, but these were formulated with art in public collections in mind, not private collectors, and they are non-binding.

The absence of clear rules leaves many private collectors unsure of how to proceed, says Rupert Keim, the president of Germany’s Federal Association of Art Auctioneers. He would support a new law governing cases where the art is in the possession of private collectors and believes the government should compensate good-faith buyers. “Consignors would be much more open to negotiating with claimants if the rules were clearer,” he says.

“From the moment an artwork is listed in lostart.de, a serious art dealer cannot trade it,” he says. “The seller is forced to find a solution with the claimant.” Especially in cases where evidence supporting a listing on lostart.de is weak, a private holder “can feel that his work is being held to ransom”, Keim says.

While database entries can elicit complaints from current holders, deletions can be challenged by claimants. At the request of three dealers, Richard Nagy, Jane Kallir and Eberhard Kornfeld, lostart.de removed 63 works by Egon Schiele claimed by the heirs of Fritz Grünbaum, who perished at Dachau concentration camp. The heirs are trying to get the works re-listed on the register – especially after a New York court last year ordered Nagy to return two Schiele watercolours to Grünbaum’s heirs (Nagy has since been granted the right to appeal).

“It’s particularly shocking that an institution like lostart.de, which is supposed to provide support to families that were expropriated, is making it much more difficult for the family of Fritz Grünbaum to exert their claims,” says Herbert Gruber, who has advised Grünbaum’s heirs on recovering lost property since 1990. “The foundation is not a judge. It should serve as a mouthpiece for families who have suffered humiliation, murder and robbery.”