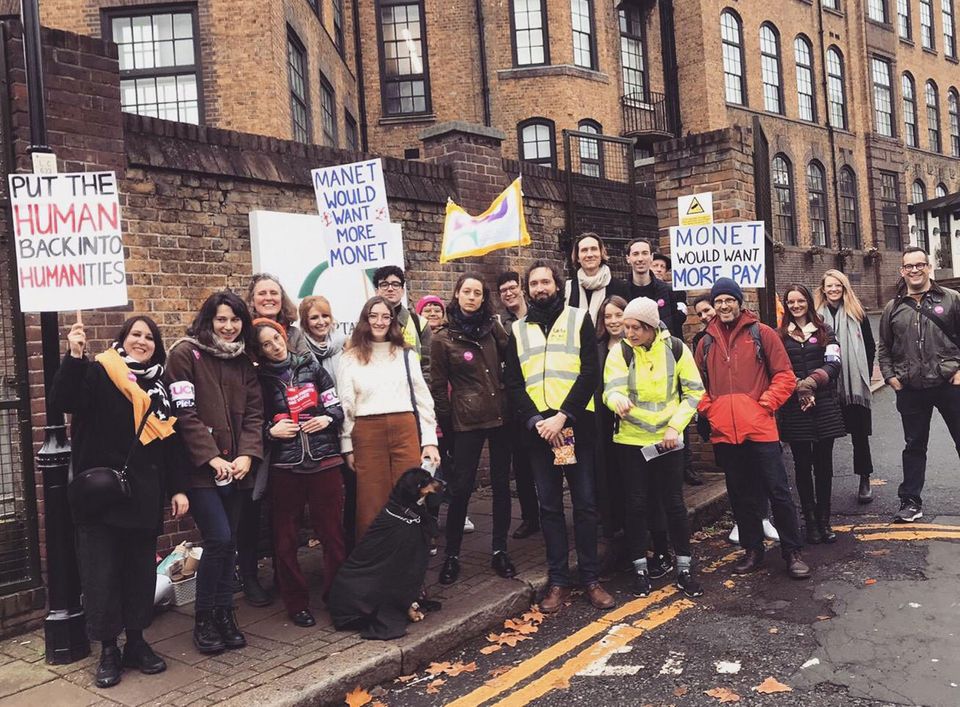 Academic staff taking strike action at the prestigious Courtauld Institute of Art in London say they are manning picket lines this week because “income and borrowing are being invested in property and other capital assets rather than on the human resources that are the foundation of student learning”.

Members of the University and College Union (UCU) are taking industrial action at colleges countrywide over pay and pensions. Staff at 60 universities have walked out on strike for eight days, until 4 December. Strike action continues today at the Courtauld’s new temporary home in King’s Cross.

The UCU union wants to stamp out casual staff contracts, with many universities employing staff on “discredited” zero hours contracts. A statement from Courtauld staff taking action says that the college is significantly affected by the casualisation of its academic workforce, who are very badly paid if preparation time and marking is taken into account. “These include doctoral and postdoctoral students who teach a significant proportion of the BA [undergraduate] and MA [postgraduate] classes.”

According to the UCU Committee of the Courtauld Branch, the teachers on casual contracts and permanent faculty lecturers look to provide Courtauld students with “close, personal attention and an experience of research-led teaching and critical thinking because we believe that this is why students choose the Courtauld as a small, single-subject institution rather than a larger, multidisciplinary university. But the strain of attempting to do this is becoming overwhelming”.

The UCU is seeking a pay rise in line with the Retail Price Index plus 3% or a minimum increase of £3,349. The union adds that changes to the Universities Superannuation Scheme, the sector’s private pension scheme, are unacceptable. “Universities have now forced through increases to our contributions to 9.6%, despite calls from the union to cap our contributions at 8%,” says a UCU statement.

The Courtauld Institute of Art, a self-governing college of the University of London, is currently being redeveloped as part of a project, known as Courtauld Connects, which will transform the Courtauld Gallery, teaching, learning and social spaces, according to the college website.

“But the current inequalities in pay, especially for teachers on precarious contracts, are particularly difficult to endure” when the Courtauld is engaged in this multi-million pound refurbishment project, say striking staff. The first phase of the development project costs £50m.

The Courtauld says in a statement: “The Courtauld’s transformation project, Courtauld Connects, funded by dedicated philanthropic gifts and the National Lottery Heritage Fund, is focused on creating the best possible environment for students, staff and the visiting public alike, and is an important investment in our future.”

The strike is a national issue that affects The Courtauld amongst many other institutions, say officials at the institute, who add that they are committed to doing all they can to resolve the dispute for the benefit of both staff and students. “While we respect the right of our staff to strike over such an important issue, our priority during the planned strike days will be to mitigate any disruption to learning, and to avoid academic disadvantage,” they say.