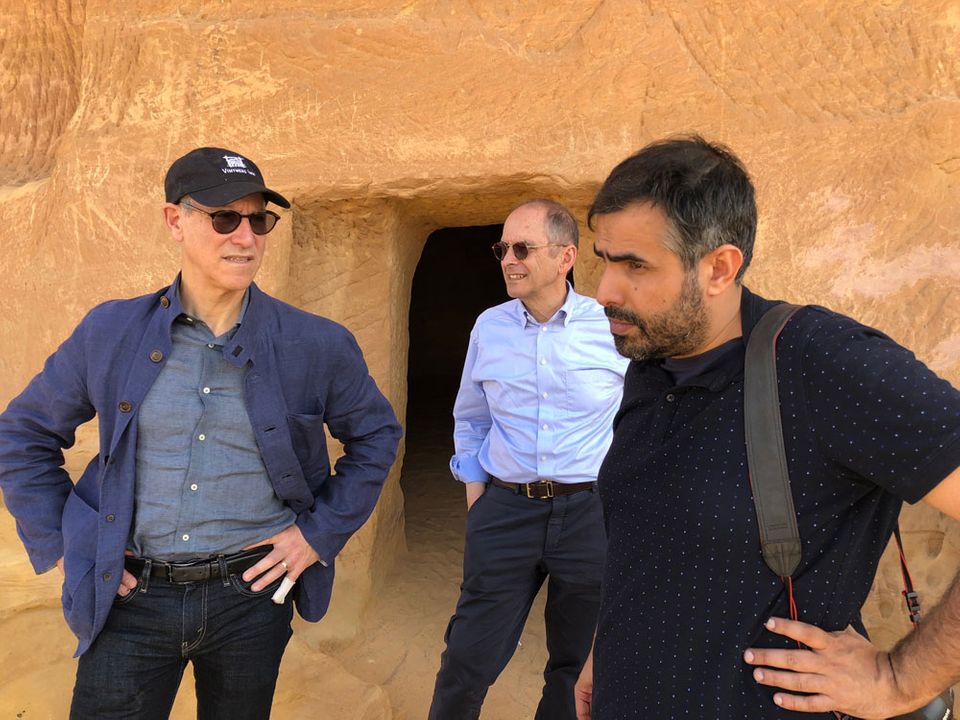 Glenn Lowry and Jay Levenson of MoMA with Ahmed Mater, the director of the Misk Art Institute, at the archaeological site of Mada’in Saleh as guests of the Crown Prince in December 2017 Stephen Stapleton

In the 88 years since its founding, Saudi Arabia has not had an official cultural policy in the Western sense, no tourism unless you count the pilgrimages to Medina and Mecca as such, and very little cultural outreach other than the diffusion of Wahabism, the country’s ultra conservative version of Islam.

This has begun to change, however, and the reforming Crown Prince Mohammed bin Salman bin Abdulaziz Al Saud, whose most media-friendly revolution among many has been to allow women to drive, is making powerful statement of intent by founding an art institute in the conservative capital, Riyadh.

At a crowded press conference on 29 January in the Museum of Modern Art (MoMA), New York, further details emerged of his philanthropic Misk Foundation, established as part of his 2030 Vision programme, and the aims and activities of its artistic arm, the Misk Art Institute. He has appointed as its director the well-known Saudi artist Ahmed Mater, an exhibition of whose work is currently at the Brooklyn Museum in New York (Mecca Journeys, until 8 April).

Within the Kingdom, the Misk Art Institute, which is aimed above all at the young, intends to become Saudi Arabia’s “leading platform for grassroots cultural production, diplomacy and exchange”, bringing focus and training to the art scene that has developed almost spontaneously over the past 15 years, stimulated by the internet, which has connected the young population (the median age in the Kingdom is 27) with the rest of the world.

Precisely because the population is so wired, an important part of the institute’s activities will be a programme to send ten young artists this autumn to Silicon Valley and the Bay area to meet tech companies and artists. This is organised together with the Crossway Foundation, led by Englishman Stephen Stapleton, that works on building links between artists in the Middle East.

While a site has not been chosen yet, the architectural competition has taken place. The Italian architect, Michele de Lucchi has won with Englishwoman Charlotte Skene Catling. The other contendents were Snøhetta and Bjark Ingels.

The emphasis will be very much on the new technologies, and The Art Newspaper has learnt that it will have three galleries: one showing historic works demonstrating the importance of the production process; the second with contemporary Saudi and international art that bridges the various craft skills, and the third, for the artists who are working in the Misk studios. There will be 20 to 40 of these, half of them for women, and visiting artists will also be invited from abroad. There will be a garden by Fernando Caruncho.

The institute will also open a community-focused art centre in Abha in the south of the country, where, over the years, the Al Meftaha Arts Village has produced many of the Kingdom’s leading artists, including Ahmed Mater.

The institute has managed to secure almost the last available area in the main exhibition space of the Arsenale in Venice to be a permanent "pavilion" for Saudi Arabia and it will be inaugurated at this year’s Architecture Biennale with an exhibition called Un/Design about loosening the formality of the design process. A jury is currently choosing between 66 submissions received through an open call.

Movies were forbidden until Crown Prince Mohammed took over, but now they are allowed and there will be a cinema in the art institute, which is bringing a multi-venue, multi-disciplinary Arab art and film festival to New York this October.

Glenn Lowry, the director of MoMA, thanked the art institute for supporting the museum’s forthcoming book, Modern Art in the Arab World: Primary Documents, and said that the institute “holds out the promise of a deepened and enriched artistic and scholarly exchange across traditions and cultures, in which MoMA is proud to play a role”. He particularly welcomed the leadership of Ahmed Mater.

Almost simultaneously, the private foundation, Art Jameel announced that it would be opening a community art centre in Jeddah in 2019, the Hayy Creative Hub, to encourage the production of art, film, and theatre in the heart of a residential neighbourhood, connected by shaded walkways and courtyards. The architects are Dubai-based Ibda Design.

This summer may finally see the opening of Ithra, the vast $400m King Abdulaziz Center for World Culture in Dhahran, funded by Aramco, the national oil company.

Tom Stuart-Smith is not involved in the design of the Misk garden, as mentioned in the original article.