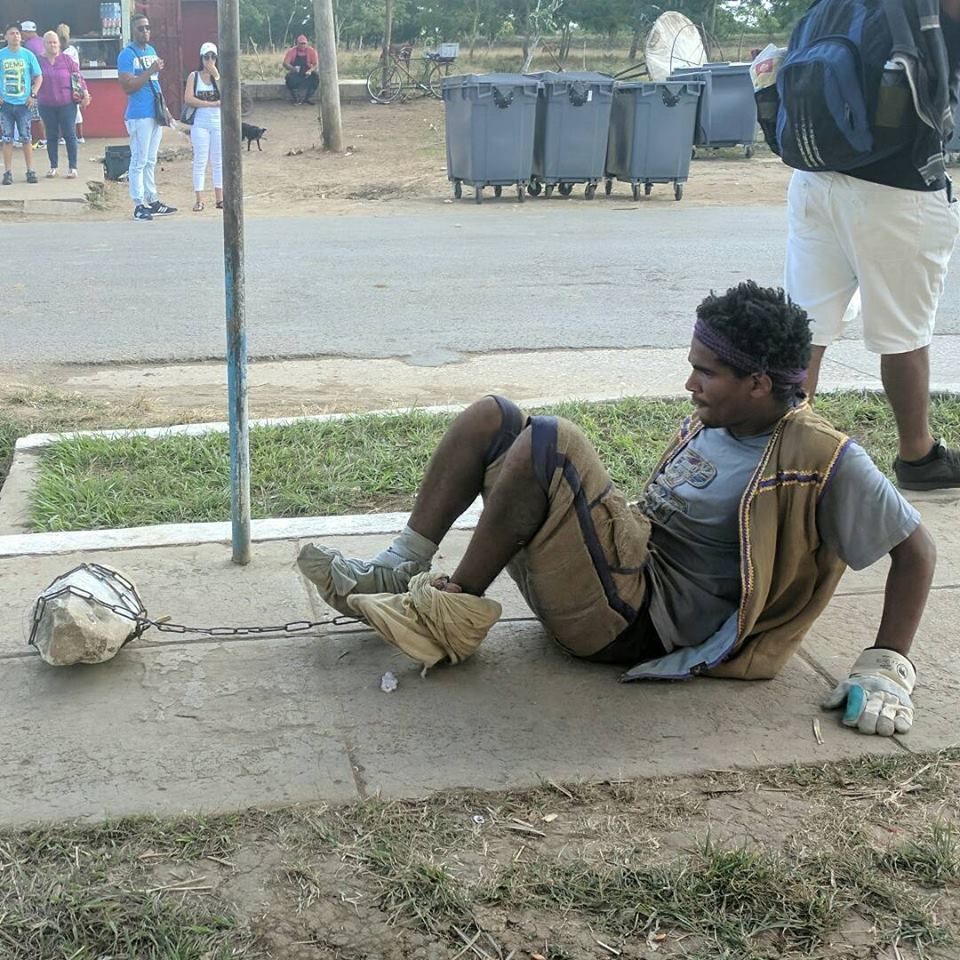 In a 2018 performance, artist Luis Manuel Otero Alcántara dragged himself through Havana's streets on a pilgrimage to the church of San Lázaro, in the name of democracy and freedom of expression © Nonardo Perea; courtesy of the artist

The Cuban artist Luis Manuel Otero Alcántara was arrested on 1 March in Havana for alleged property damage following his involvement in an anti-censorship protest and will face a summary trial in ten days, according to a statement released by the San Isidro Movement, a collective of Cuban activist artists that emerged in 2018 in response to the controversial censorship legislation known as Decree 349 that has since seen many artists and creatives targeted by the government.

The artist was arrested outside of his home when he was en route to participate in a “kiss-in” that had been convened by members of the LGTBIQ community to protest the censorship of a gay kiss scene in the 2018 film Love, Simon that was broadcasted by the Cuban Institute of Radio and Television. Around 25 are said to have participated in the protest; the organiser Jancel Moreno was also arrested.

Otero Alcántara’s girlfriend, the artist and activist Claudia Genlui, was attacked by a police officer when she attempted to film Otero Alcántara’s arrest on her phone. She was “hit, thrown to the ground and left on the public road; her cell phone was confiscated, and she did not receive documents to show that her phone is now in police possession” according to the movement’s statement.

Genlui and members of the San Isidro Movement met at the headquarters of the national police in Havana to request information about Otero Alcántara’s arrest this week, where a police officer told Genlui that Otero Alcántara has been detained in a processing centre and will have a judgement within the next ten days.

“Luis Manuel Otero Alcántara is now in jail prior to conviction. He had already been accused by Cuban authorities of contempt toward state leadership and desecration of national symbols,” the Movement’s letter reads, adding that, although Alcántara has been arrested before, most of his previous charges “do not carry enough weight, and therefore the state has fabricated a criminal charge against him”.

“We note that the use of unnecessary repressive force and physical abuse of helpless citizens and the course of policing procedures should be regarded as forms of state terrorism.”

Decree 349 essentially grants the Cuban Republic complete control over independent artistic production in the private sector, allowing government officials to shut down concerts, performances, galleries and book sales if they do not comply with a strict list of prohibited subject matter. Since it went into effect in December 2018, artist-activists have vigorously opposed the legislation through protests, performances and events, generally resulting in multiple arrests. Otero Alcántara has been arrested more than 20 times since 2018 for his political performances and protests.

Last month, the Cuban-American artist Coco Fusco wrote an open letter to Cuban artists on Facebook, where she claims that past accusations of “contempt and outrage to the patriotic symbols related to the performances he has developed in the streets of Havana are designed not only to crush [Otero Alcántara’s] artistic career but also to instil fear in the artistic community”. She urges art professionals to “raise their voices and denounce the abuse” against the artist.

The letter addresses the case of other of Cuban artist who have been either censored, beaten, interrogated or persecuted by authorities, such as Juansí Gonzalez, who was arrested in the 1980s for his street performances that critiqued government dictatorship, and Tania Bruguera, who was arrested in 2015 after a 100-hour open-studio performance in which she read The Origins of Totalitarianism (1951) by the political philosopher Hannah Arendt.

Fusco says these series of aggressions by the Cuban government against artists, musicians and journalists is “a strategy to tame creators that has worked very well in Cuba for more than 60years.” She adds: “The State that promotes some is the State that suppresses all.”

The San Isidro Movement says it has already begun a campaign to free Otero Alcántara and uphold the civil rights of all Cubans. “We will be in the streets and in the courts, and we will be raising our voices against injustice. We call on artists and intellectuals of the world to speak out against the injustice being perpetrated by the Cuban government and to send messages of support.”