Calls for 'art strike' against state-run cultural institutions in Cuba 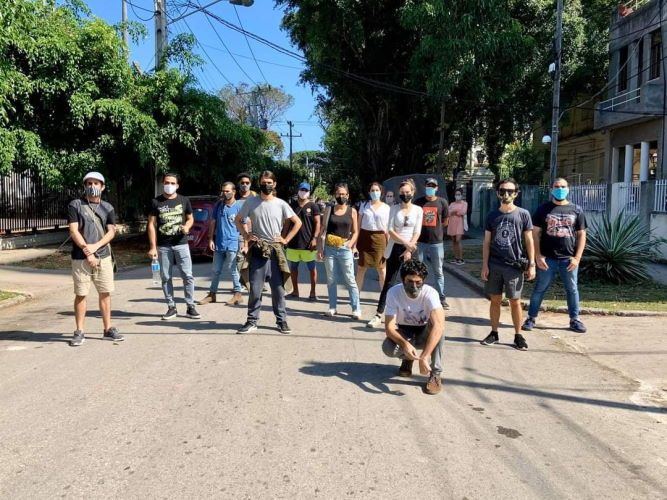 Members of the Cuban 27N movement, named after a day of major protests in November against government censorship

A Cuban design collective in Paris is calling on artists, musicians, filmmakers, writers and other art professionals “on and off the island” to stop working with government-run cultural institutions in Cuba. Atelier Morales, which is made up of the Cuban architects Teresa Ayuso and Juan Luis Morales, tells The Art Newspaper the campaign is “a strike of personal responsibility to fight the Cuban machinery of repression, which is one of the strongest and most effective in the world”.

Atelier Morales say that Cuban institutions are “complicit in their silence”, and that organisations and individuals in “free and democratic countries” must support the “courageous Cuban artists and intellectuals who are facing the government and asserting their ideas through peaceful and independent civil movements”.

For the past few years, activists have protested against Decree 349—a law that went into effect in 2018 which requires artists to register for government-issued licenses in order to create work for public spaces or face penalties, fines and seizures. Critics and human rights groups says the law essentially allows the government to censor work it sees as dissident or provocative.

“The strike will end the day when [artists'] rights are fully respected and without conditions or censorship, without defamation or arbitrary arrests,” Atelier Morales say.

Last month a free speech protest outside the ministry building in Havana sparked a violent confrontation by officials against the protestors, leading to the arrest or detainment of dozens of activists. The incident also led to a petition and a legal motion calling for the removal of the culture minister Alpidio Alonso, who was video taped striking a journalist. Since then, state-run media has amped up efforts to discredit artists, including Tania Bruguera and members of the San Isidro Movement and 27N. Last week, the television programme Razones de Cuba claimed Bruguera's work is “a fabricated character made by the US” that seeks to “conquer symbolic space in the country’s institutions”.

The report prompted Llilian Llanes, a former director of the Havana Biennial who has been a long-time supporter of Bruguera’s work, to write an open letter of support that was published on the independent site Artcrónica. Llanes called the media's efforts a “crude attempt to disqualify Bruguera as an artist” and an “evident demonstration of the reporter’s ignorance about the development of contemporary arts in Cuba”.

“No one is in a position to deny [Bruguera] the reputation she has earned over more than 20 years of work as a Cuban artist,” Llanes adds. “Cuban art history will give her her due, no matter who weighs in.”