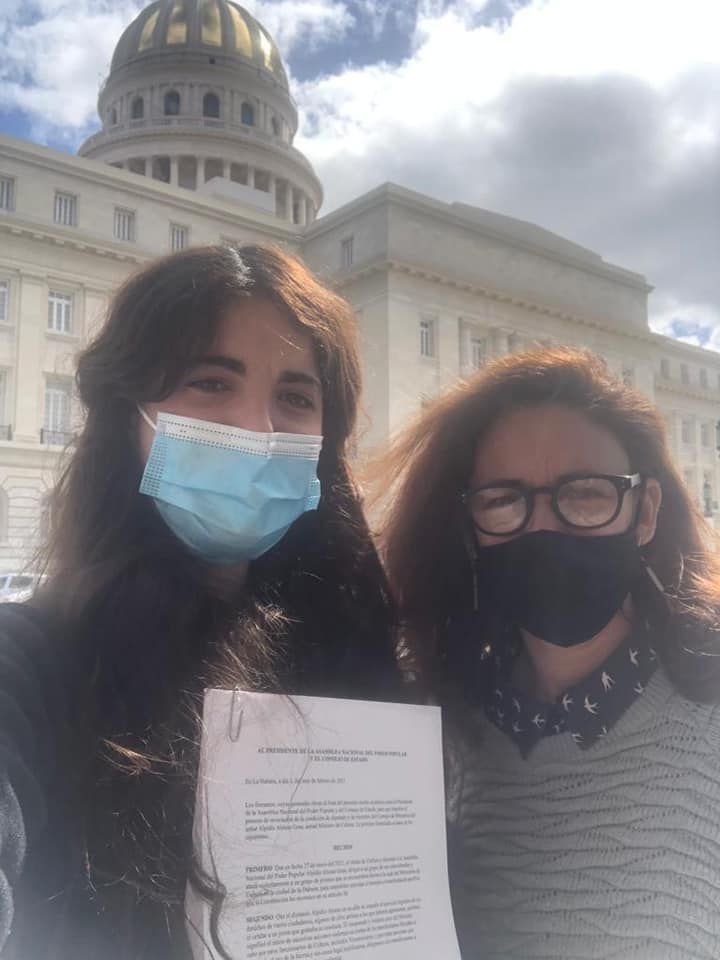 Carolina Barrero and Solveig Font filed the petition to remove Culture Minister Alpidio Alonso with the Cuban parliament on Wednesday. The next day, Barrero was reportedly detained by police Photo: 27N

The Cuban activist group 27N has filed a legal motion to parliament demanding the removal of the country’s culture minister Alpidio Alonso, one week after a free speech protest outside the ministry building in Havana sparked a violent confrontation from officials and the arrest of several arts professionals and journalists.

The curator Solveig Font and art historian Carolina Barrero filed the request on 3 February on behalf of more than 1,200 artists and activists who signed a petition calling for the culture minister’s dismissal. Among the allegations in the petition is that on 27 January Alonso committed a violent crime, was responsible for the arrest of peaceful demonstrators, and that his “outburst against young independent artists and journalists [...] was not only damaging to the protestors but also represented an excess use of power”. On Thursday, Barrero was reportedly detained by police while speaking on the phone with the artist Tania Bruguera.

“As citizens of the Republic of Cuba we believe in the right to peacefully assert our rights and we emphatically condemn any manifestation of violence, in particular any manifestation of state violence promoted by institutions and exercised by public officials,” the 27N movement says in a statement.

The motion was filed based on the Revocation of Mandate Act of 1999, which allows for the removal of elected officials if they engage in conduct that is incompatible to public service, as well as Article 61 of the Cuban Constitution, which maintains citizens’ right to petition government institutions and authorities, according to the group’s statement.

In videos and photographs recorded by several people present at the demonstration last week and posted online, Alonso can be seen swiping at Mauricio Mendoza, a journalist for the newspaper Diario de Cuba, and knocking down his cell phone. Several demonstrators were then arrested and forced onto a bus, where many say they were further attacked by police.

Alonso was accompanied by the vice ministers of culture Fernando Rojas and Fernando León Jacomino during the confrontation with protesters. A separate petition calls for the resignation of all three, as well as Cuba’s president Miguel Díaz-Canel Bermúdez.

The protest was staged to mark two months since hundreds gathered in front of the culture ministry to protest the passage of Decree 349—a law that went into effect in late 2018 that requires artists to register for a government-issued license in order to create work for public spaces, or face penalities, fines and seizures. The law effectively allows the government to censor work it sees as dissident or provocative, human rights groups say.