Culture clash: how Venice battled to keep the Modernists out

The Biennale is celebrated for a collision of the contemporary and the historical, but newer architecture remains hidden behind the city’s venerable walls

“We repudiate the old Venice,” declared Filippo Tommaso Marinetti, the author of the Futurist Manifesto of 1909, dedicated to speed, war, industry and the subjugation of women. His latest manifesto was strewn, in thousands of handbills, from the top of the Renaissance clock tower in St Mark’s Square. “We want to cure and heal this putrefying city, this magnificent sore from the past… let us hasten to fill in its little reeking canals with the ruins from its leprous and crumbling palaces. Let us burn the gondolas—rocking chairs for cretins—and raise to the heavens the imposing geometry of metal bridges and factories plumed with smoke, to abolish the cascading curves of the old architecture.”

Venice remained deaf to such iconoclastic pleas. Although new bridges and factories were built—mostly in Mestre, on the far side of the railway bridge linking “La Serenissima” to the mainland—strident Futurism and nascent Modernism were to make little headway in this great dowager duchess of a city.

Marinetti, however, did have some impact. After the First World War, the poet fell in with Benito Mussolini and wrote the Fascist Manifesto of 1919. And although Mussolini was no dogmatist when it came to architecture, he did endow Venice with the impressive Ponte Littorio, the dual carriageway road bridge designed by the engineer Eugenio Miozzi and opened by the Italian dictator in 1933. Il Duce was also keen on the bold new cinema and casino on the Lido, along with the island’s handsome new San Nicolò airport. 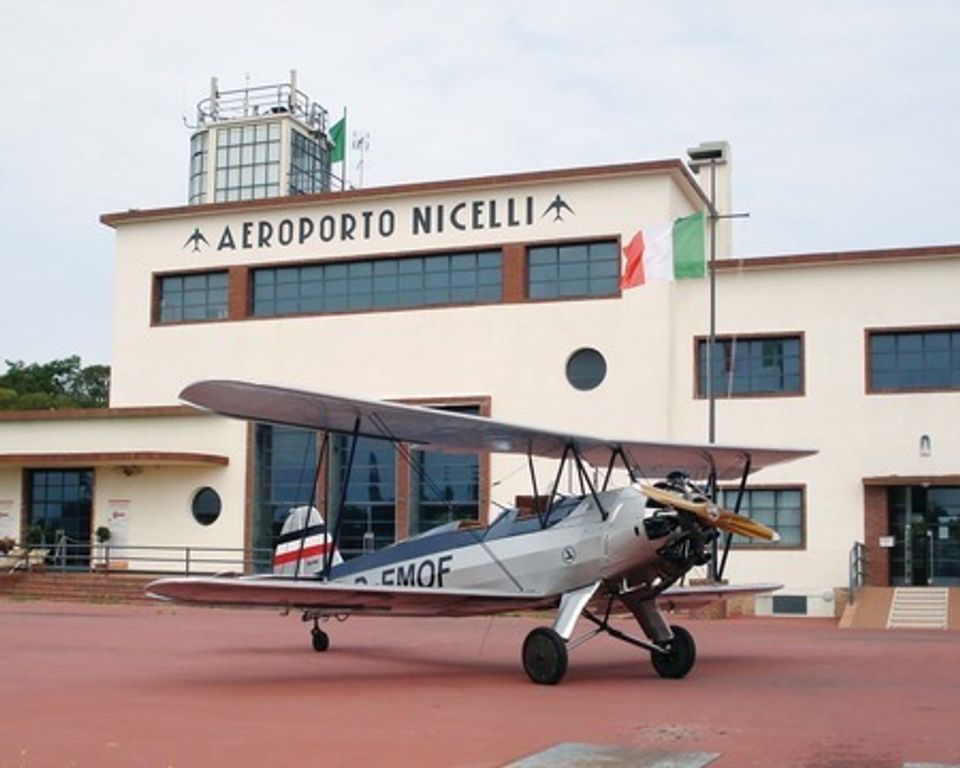 The Venice-Lido Airport was admired by Mussolini. Photo: © Magnus Manske

And when Mussolini first met Adolf Hitler in 1934, he did so in the Giardini, the exhibition grounds of the International Art Exhibition, which was founded in 1895. He was able to show the German dictator bold new pavilions designed in a modern take on Neo-Classicism. The Nazis themselves gave the German pavilion a severe makeover, by the architect Ernst Haiger, in 1938. Susanne Gaensheimer, the curator of the 2011 Venice Biennale, dismissed calls for the pavilion’s demolition—led by Arno Sighard, the president of the Federal Chamber of German Architects—in 2010. “You can’t change history by demolishing architecture,” she said, “but we can use architecture to preserve our consciousness of history.”

Preservation, in fact, has been the driving force of most architectural endeavour in Venice since John Ruskin drew and measured buildings in the city and railed against the arrival of steam trains in 1846. Although no fan of Palladianism, Ruskin was shocked by the demolition of the church of Santa Lucia (Andrea Palladio had made sketches for it before his death in 1580), demanded by the construction of a railway terminus facing the Grand Canal.

Ever since, conservationists have battled the forces of Modernism. There have been those who have wanted to pickle the city in Ruskinian aspic, as if it were nothing more—or less—than one enormous antique work of art, and those who have agreed to change as long as it is hidden away. As a result, many of the best Modern interventions in the city are interiors, notably those of the inventive Venetian architect and glass designer Carlo Scarpa. These include the exquisitely restored Olivetti showroom in St Mark’s Square, his work at the Fondazione Querini Stampalia—a beautiful house-museum with a magnificent historic art collection—and the Palazzo Fondazione Masieri, a research institute on the Grand Canal.

The story of the Palazzo Fondazione Masieri takes us to the heart of the debate over Modernism in Venice. In 1952, Angelo Masieri, a 30-year-old architect, and his wife, Savina, went to Arizona to see Frank Lloyd Wright. They commissioned the legendary US architect to design a replacement for the family’s palazzo on the corner of Rio Nuovo and the Grand Canal.

Wright’s design was remarkably modest and even respectful of Venetian tradition. Nevertheless, it unleashed a storm of protest. If it was built, roared Ernest Hemingway, Venice deserved to burn. Other influential voices agreed: the Wright palazzo was wrong for Venice. It was refused planning permission.

Angelo Masieri, meanwhile, had been killed in a car accident on his trip to the US to visit Wright. Savina Masieri drove the project on. Working with the University of Venice, she wanted the palazzo to be a study centre and residence for architecture students. In the event, Carlo Scarpa was given permission to remodel the interior (which he did beautifully) as long as the exterior was left unchanged. Scarpa’s interior—completed in 1983, five years after his death and more than 30 years after Angelo Masieri first contacted Wright—is undeniably beautiful, and yet, because it is one of Venice’s many well-kept secrets, the conservationists had really won the debate.

As if to reinforce their victory, two other distinguished Modern architects soon came to grief in Venice. In 1965 (the year he died), Le Corbusier was working on the design for a remarkable new hospital to be built on the Fondamenta San Giobbe, close to the Santa Lucia railway terminus. For all its ingenuity and implied references to Medieval monasteries, the design was never realised. Le Corbusier may have been widely regarded as the finest Modern European architect, yet in Venetian eyes, he was also the polemicist who had written of how he wished to transform the character of European cities in bombastic fashion.

Although he was a Modernist, the US architect Louis Kahn was capable of designing in an elemental manner that all but defied the march of history and period architectural styles. In 1968, he was asked to design a new congress centre in the Giardini, but as the Biennale’s gardens were already crowded with an exotic zoo of buildings, a new site was chosen in the Arsenale, the city’s vast Medieval shipyard. Kahn proposed a thrilling reinforced-concrete suspended bridge of a building, spanning a canal. But although he had designed some of the world’s most inspiring museums, institutes and university buildings, Kahn was not right for Venice. His project died here, too. 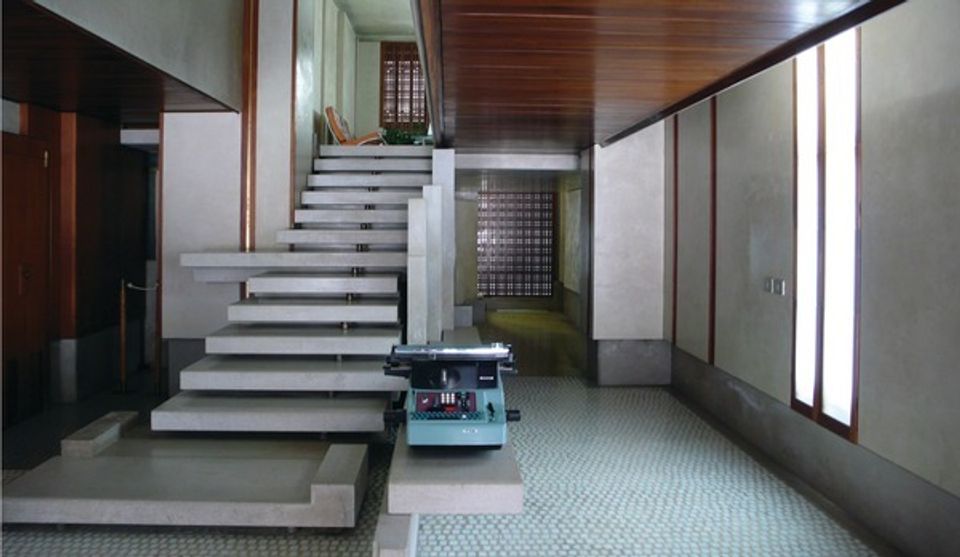 Since then, Venice has embraced modern architecture as long as it has been veiled by venerable walls. Tadao Ando’s interior remodelling of the Punta della Dogana, next to Baldassarre Longhena’s glorious Baroque 17th-century Santa Maria della Salute, for François Pinault’s collection of contemporary art, is exemplary. Rem Koolhaas, meanwhile, has been busy for a number of years on the controversial conversion of the imposing Fondaco dei Tedeschi by the Rialto Bridge into a shopping mall and cultural theme park for LVMH.

On the fringes of the old city, you can find new housing, modern yet in keeping with the scale and grain of its surroundings, such as Apartment Building D by Cino Zucchi on the Giudecca and Vittorio Gregotti’s low-lying scheme—complete with terraces, loggias and gardens—in Canareggio. Perhaps rightly, wholly new buildings are as rare as cars in Venice (much as Marinetti would have liked them roaring along a filled-in Grand Canal), and when they do emerge—like Stirling and Wilford’s Biennale bookshop, 1991, in the Giardini—they are modest events. Venice cures itself, it seems, not through noisy futuristic or grand modern gestures, but through subtlety, secrecy, quiet architectural sorcery and Scarpa.