“Let yourself be marvelled”. With these words the curator Elena Geuna welcomed the press to Treasures from the Wreck of the Unbelievable (9 April-3 December), a sprawling exhibition of new work by Damien Hirst in Venice, the artist’s first major show in nearly a decade.

This monumentally ambitious tribute to the sculpture of ancient Greece and Rome, to the Aztecs, to civilisations in China, Africa, India, Bali, and more, shows us Hirst’s imagination unleashed on an unprecedented scale. This is what art looks like when unbridled ambition meets apparently limitless financial resources.

The show also includes nods to pop culture ranging from coral-encrusted Disney figures, such as Mickey Mouse, to portraits of the musician Pharrell Williams as a pharaoh in white marble; the singer Rihanna as an Egyptian goddess in red marble; and Yolandi Visser, of the South African rap duo Die Antwoord, as a Mesopotamian deity in bronze and gold leaf.

Ten years in the making, the exhibition fills the entirety of French collector François Pinault’s two museums in the city, Palazzo Grassi and Punta della Dogana.

The 190 works on display, many of which are sculptures of gargantuan scale, were discovered on the sea bed according to the show's imaginary narrative. Most works are in fact produced in an edition of five, including two artist's proofs that belong to Hirst. A 60ft high headless demon holding a bowl fills the entire courtyard of Palazzo Grassi. Made from painted resin, the figure is inspired by a William Blake drawing in the Tate collection and is Hirst’s very own Colossus of Rhodes, a sculpture which he is hoping to cast in bronze. 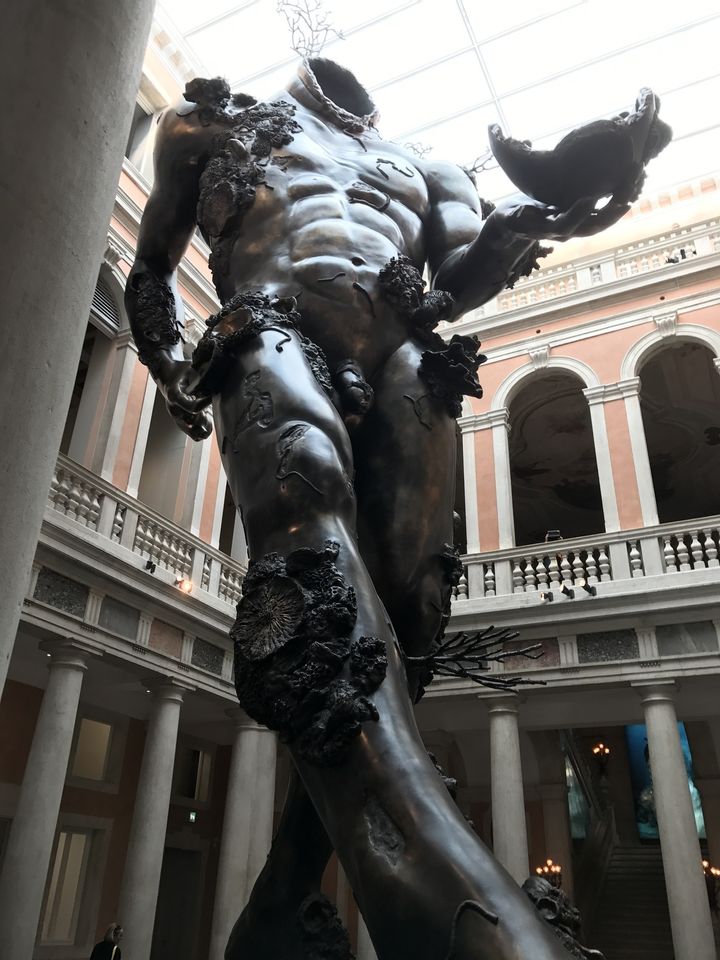 At Punta della Dogana there is a 23ft high bronze of a female Greek warrior who straddles a standing bear, her arms aloft, clutching a sword in each hand. The work appears encrusted in red, yellow and purple corals but the marine growths have been painstakingly recreated in painted bronze.

The fictional story underlying the show is of a ship, filled with works commissioned in the second century by a freed slave, Cif Amotan II, for a temple dedicated to the sun. The ship sank off the coast of East Africa and the treasures it contained lay at the bottom of the sea until they were recovered by divers in 2008.

Another hall at the Punta della Dogana is dedicated to twin sculptures of the Hindu goddess Kali fighting the Greek monster Hydra—her six sword-wielding arms pitted against his seven serpent heads—the ancient Indian deity meeting the creature who fought Hercules for the first time thanks to Hirst. 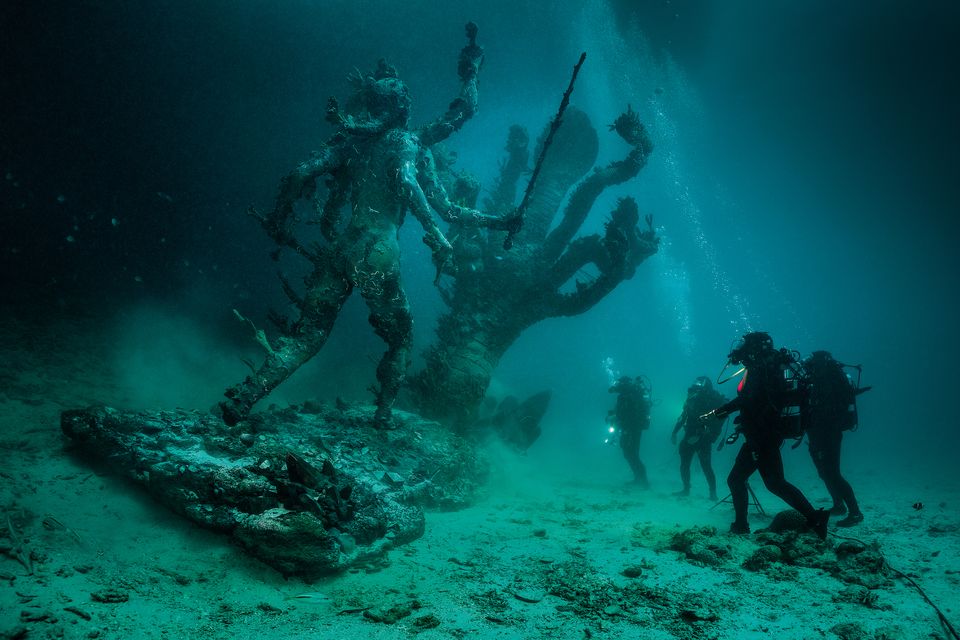 At Palazzo Grassi, another unlikely pairing is Andromeda, the princess of Greek mythology, who Hirst depicts chained to a rock cowering from the sea beast sent to kill her by the sea god Poseidon. Hirst has added in a second monster, a giant shark lunging for Andromeda mouth agape, recalling the artist’s famous tiger shark preserved in formaldehyde as well as Steven Spielberg’s Jaws.

The variety of materials on display and the craftsmanship required to shape them into works of art is impressive. Hirst employed specialists across a range of countries with the skills to fashion precious stones and metals.

A severed head of Medusa appears in the show in three different versions: one in crystal glass, another in malachite and, finally, in bronze, gold and silver. This is Hirst’s love letter to the virtuosity of ancient artisans: entire vitrines filled with gold jewellery reminiscent of Greek and Roman workmanship; a gold-plated shield of Achilles with intricately detailed battle and agricultural scenes; and finely-worked silver sculptures recalling the dexterity of Renaissance metalworkers. 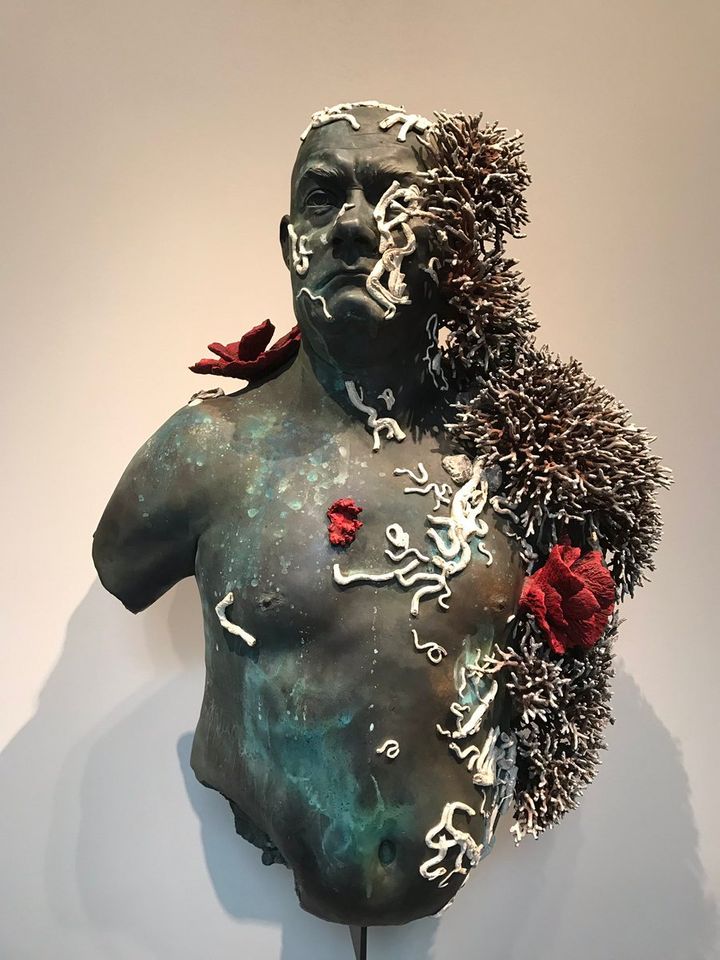 Hirst himself appears in the show cast as a “collector” in bronze. The sculpture, on display on the first floor of Palazzo Grassi, depicts the fleshy torso of the artist covered in what appear to be marine slugs and coral. Hirst’s presence here, presiding over this spectacle of his own making, is a tribute to the power of the collector through the ages, from the imaginary freed slave who commissioned these works, to the artist who imagined and produced them and the French billionaire collector Pinault who helped to finance the entire operation (organisers decline to discuss costs).

The critics are already divided over the show’s artistic value. The Daily Telegraph declared the exhibition “a spectacular, bloated folly, an enormity that may prove the shipwreck of Hirst’s career” while the Guardian described it as “a titanic return to form” which has “redeemed” Hirst.

For his own part, François Pinault believes that this exhibition is a ground-breaking new departure for the artist. “By its excess, by its ambition, and finally by its audacity, [the show] makes a complete break with all that he has achieved so far. The works do not fit into any conventional aesthetic category or canonical structure,” the collector says in the exhibition catalogue.