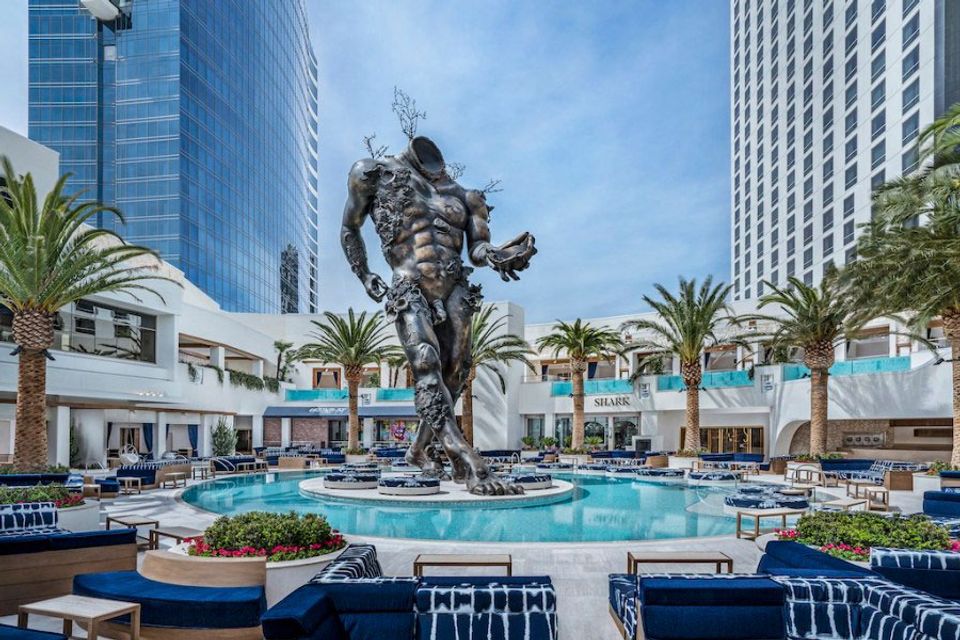 Damien Hirst’s art was thrust centre stage when Palms Casino Resort in Las Vegas unveiled the fruits of its $690m overhaul earlier this year. Notable additions included a $100,000-a-night suite designed by the British artist and a pool club boasting two of his sculptures from his 2017 Venice show, Treasures from the Wreck of the Unbelievable.

But now, just seven months later, the sprawling Kaos club has closed abruptly. The Hirst sculptures—the 60ft bronze piece Demon With Bowl (2014), reported to have cost more than $14m, and the 23ft Warrior and the Bear (2015)—will “remain part of the Palms’ fine art collection”, a spokesman says, although he declined to comment on whether they will remain in situ.

The “programming and use” of the club venue, which includes 73sq. ft of outdoor space in addition to 29sq. ft inside, is currently being reassessed, according to Michael Britt, a spokesman for the parent company Red Rock Resorts. “In the interim, we intend to use the venues for private meeting space and special events, in addition to everyday resort pool operations.”

Britt says in a statement that the “expense side” of the business had been “challenging”. He largely attributes this to “the entertainment and fixed cost structure associated with Kaos”. Elsewhere, Palms has experienced “exceptional growth across both the gaming and non-gaming segments of the business”, Britt stresses.

In a call to investors on Tuesday, Frank and Lorenzo Ferritta, the art collecting brothers who control the casino company, said the returns simply did not justify the costs. Patrons “did not have spendable money, we didn’t see the crossover into the casino”, chief executive officer Frank Fertitta said on the call, according to Bloomberg.

The company will be hit by a $28.2m charge due to the club’s closure and additional expenses of $16m to $22m over the next six months.

A spokesman for the Palms’ collection declined to comment on whether other parts of the business, including the Unknown Bar featuring a Hirst shark in formaldehyde and the Greene St restaurant, which is festooned with graffiti, have been affected.

“I love what Frank and Lorenzo Fertitta have done with the Palms,” Hirst said at the unveiling of his Empathy Suite in March. The two storey, 9,000 sq.ft suite features pill cabinet art works, a spin painting pool table and flooring patterned with butterflies. “They’ve allowed me to create a suite in the hotel, design everything and completely fill it with my art.”