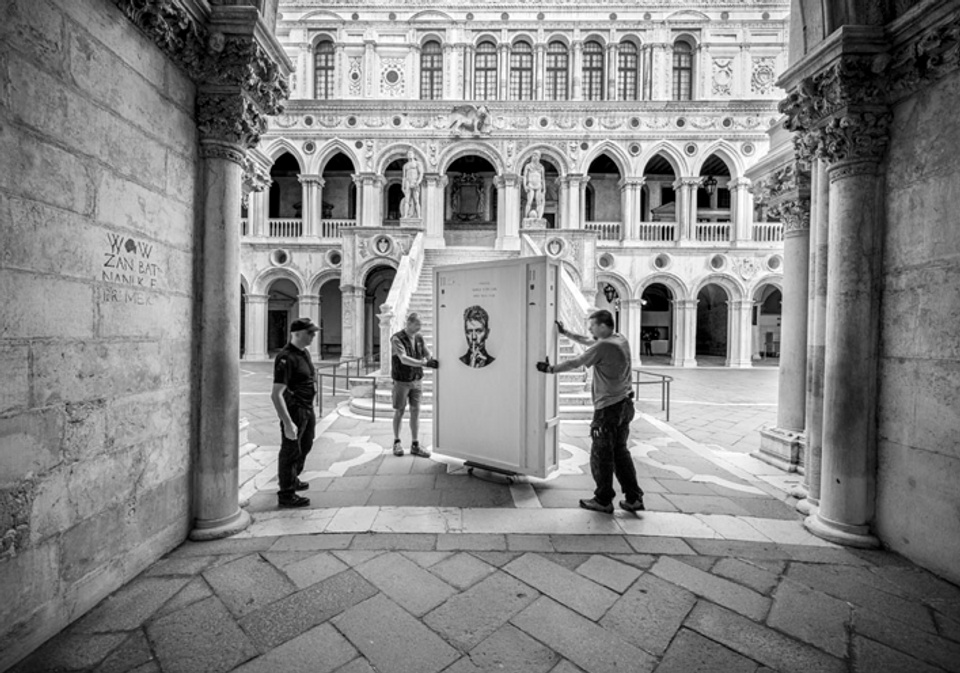 David Bowie’s cherished altarpiece of Saint Catherine by Jacopo Tintoretto has returned to Venice after more than 200 years thanks to the Belgian collector Marnix Neerman, who has been revealed as the buyer.

The painting, which was one of Bowie's very first acquisitions, purchased from the London dealer Colnaghi in 1987, goes on show at the Palazzo Ducale this week in an exhibition of Flemish and Italian Old Masters from Flemish collections, many of which have never been loaned before.

Despite mainly collecting Modern and contemporary art, Bowie kept his Tintoretto until he died in 2016, even naming his record label after the Venetian painter. St Catherine was bought by Neerman for £191,000 at Sotheby’s white-glove sale of Bowie’s collection last November, which drew record crowds to the auction house.

It was immediately announced that the work—now dated 1560-70 after technical analysis revealed the painting to have been created earlier than was originally thought—would be loaned long-term to the Rubens House in Antwerp, a museum that Bowie loved. The painting was unveiled at the museum in June, a move that saw visitor figures jump by 30%.

Tintoretto painted the work for the church of San Geminiano on St Mark’s Square in Venice, where it remained until the church was demolished in 1807 during Napoleon’s occupation. Rubens most likely saw Tintoretto’s altarpiece there, while Anthony van Dyck, his celebrated pupil, sketched it in situ. St Catherine was briefly placed in the Galleria dell’Accademia in Florence before disappearing into private ownership. The painting most likely left Venice in around 1818 when it was bought by a Colonel T.H. Davies.

The altarpiece goes on show with a group of works by Flemish Old Masters who admired and were influenced by Tintoretto, including Rubens, Van Dyck and Maerten de Vos. Two other paintings, by Titian, have also returned to Venice for the exhibition. They are Jacopo Pesaro presenting Saint Peter to Pope Alexander VI (1503-06), which has been loaned by the Royal Museum of Fine Arts in Antwerp, and Portrait of a Lady and her Daughter (around 1550-60)—now accepted to be of Titian’s mistress, Milia, and their daughter Emilia.

The latter, which returns to La Serenissima for the first time in almost 500 years, has also been loaned by Neerman. He bought the painting for an undisclosed sum in a private sale at Sotheby's in 2017.

He told the auction house in June: “While attending Sotheby's London view of the summer Old Masters sale one year later in 2017, Sotheby's James Macdonald and George Gordon (who I have known for more than 35 years) asked me to come upstairs and look at a painting. I was completely swept off my feet when I was once again confronted with this beautiful image of a mother and her child, later identified by Jaynie Anderson as Titian's beloved Milia and their daughter Emilia.

“My own daughter Maja remembers my emotional reaction and that afterwards, as we stood outside the galleries on Bond Street, I told her: ‘If we let this painting go, the last comment you will hear on my deathbed will be—"We could have had a Titian in our collection." As my good friend Bill Middendorf II, former US Secretary of the Navy under President Gerald Ford, and a great collector, says: ‘We have two collections: the one we own and the collection comprised of the paintings that we have missed.'

“There followed a sleepless night, filled with several phone calls and emails, and resulting in a private sale with my favourite auction house and the beginning of a new adventure.”