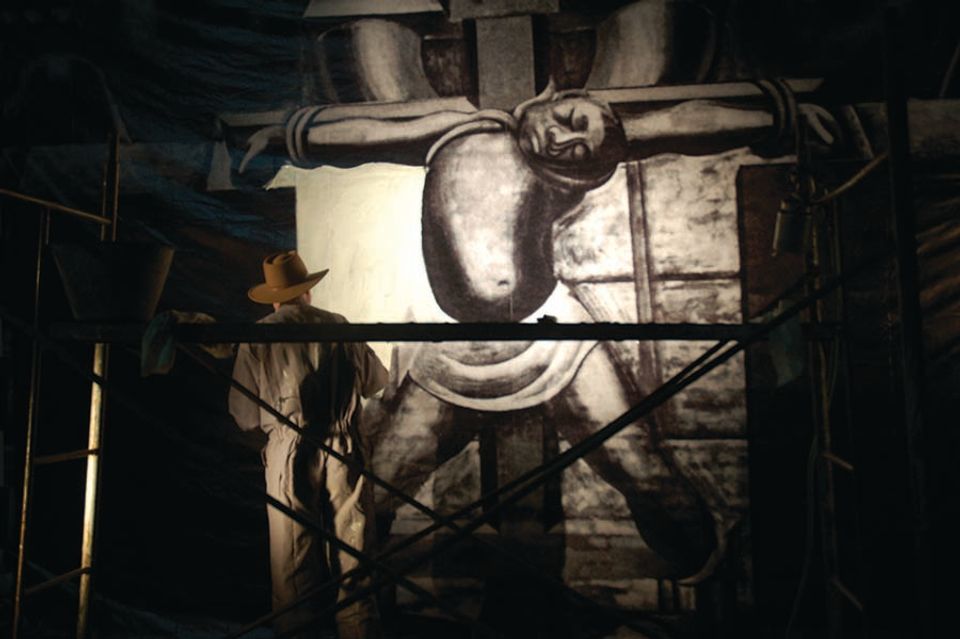 A still from the film recreating Siqueiros secretly finishing the central figure in his iconic "America Tropical" mural in LA. Lorena Manriquez

A new documentary chronicles the story of the Mexican artist and revolutionary activist David Siqueiros. Produced by the Chilean-American filmmakers Lorena Manríquez and Miguel Picker, Siqueiros: Walls of Passion explores the artist’s colourful life through archival footage, contemporary interviews and lushly filmed surveys of some of his most iconic works. It also captures the resurrection of his historic mural América Tropical, a beacon of the Chicano movement which he painted after arriving in Los Angeles in 1932.

Manríquez and Picker conceived the film in 2009, when the previously whitewashed mural, which is located at Olvera Street in El Pueblo de Los Angeles Historical District, was still undergoing a years-long conservation project led by the Getty Conservation Institute and the city of Los Angeles.

“Around that time, I realised that I had never heard of Siqueiros, but learned that he was a master who had been somewhat forgotten in the art books, and who had been censored because of his politics,” Manríquez says. “I began researching the fascinating backstory of this mural and about how it inspired the Chicano muralist movement of the late 1960s and 1970s.”

Siqueiros (1896-1974) was inspired to become an artist after observing a painter decorating the walls of his family home as a child. A co-founder of the Syndicate of Revolutionary Mexican Painters, Sculptors and Engravers, Siqueiros was a leading figure in the Mexican muralist movement, along with Diego Rivera and José Orozco. He became politically active during the Mexican Revolution in 1910, joining the student protests in Mexico City and the Constitutional Army. 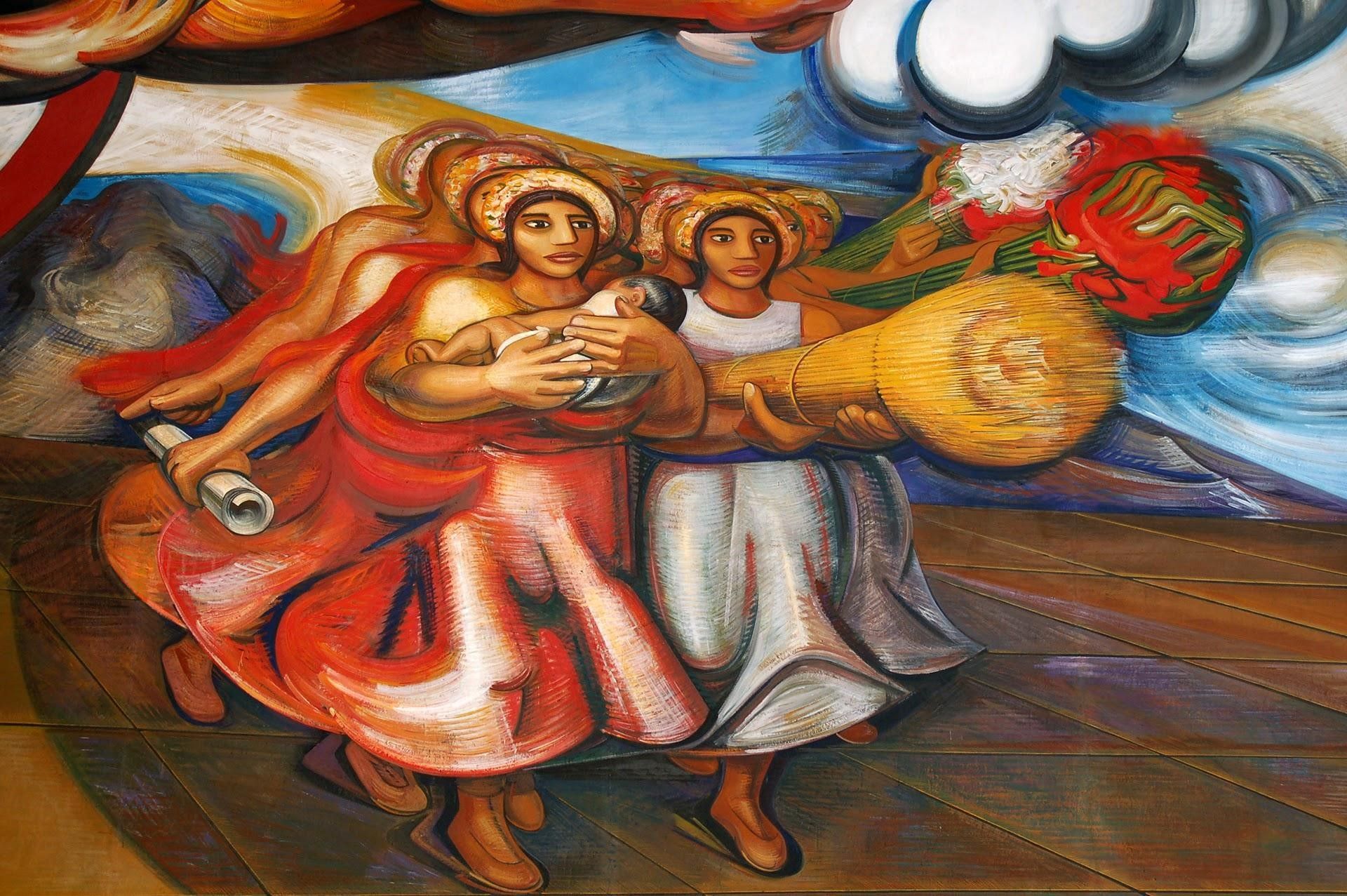 The mural "For Complete Social Security of All Mexicans," depicting women resisting oppression, was completed by the artist in 1956. Lorena Manriquez

As a soldier, Siqueiros “travelled all around the country and met many different Mexicans”, he wrote, and his political vision led him to “become a citizen artist” in order to “capture the struggle of our people”. Siqueiros published the manifesto Vida Americana in 1921, in which he rejected art made for the bourgeoisie and argued that art should primarily have a social mission rather than an aesthetic one.

Although he was then already established as a revolutionary artist and well-known for his political dissent, Siqueiros was commissioned in 1932 by La Plaza Art Center to paint an idyllic, romanticised view of tropical America. But the day before the mural was unveiled, he worked overnight and painted a crucified Indigenous Mexican against a background of Maya ruins and an American eagle overhead, and retitled the piece América Tropical: Oprimida y Destrozada por los Imperialismos (Tropical America: Oppressed and Destroyed by Imperialisms).

The mural scandalised the commissioners and was censored and whitewashed within the year. It was only rediscovered in the late 1960s, when efforts to revive the piece began. The first official phase of the project was carried out in the early 1990s, when the Getty and the city of Los Angeles stepped in to preserve the mural as an important piece of Latinx history.

Based on the artist’s writings, Siqueiros is voiced by the actor Cheech Marin—of Cheech & Chong fame—who revealed in 2018 that he would collaborate with the Riverside Art Museum to develop the Cheech Marin Center for Chicano Art and Culture. The institution slated to open next year will exhibit a significant portion of his 700-piece collection of Chicano art. “Our budget was quite small but when we reached out to Cheech he agreed immediately,” Manríquez says. “He loved the story and its connection with the Chicano community in Los Angeles.”

Manríquez and Picker believe the documentary serves as a tribute to the artist’s progressive political vision, as Siqueiros “championed the idea that art needed to participate in the transformation of history and government”, Picker says. “The message is pertinent because it mirrors the struggles still felt by Hispanic communities today.” 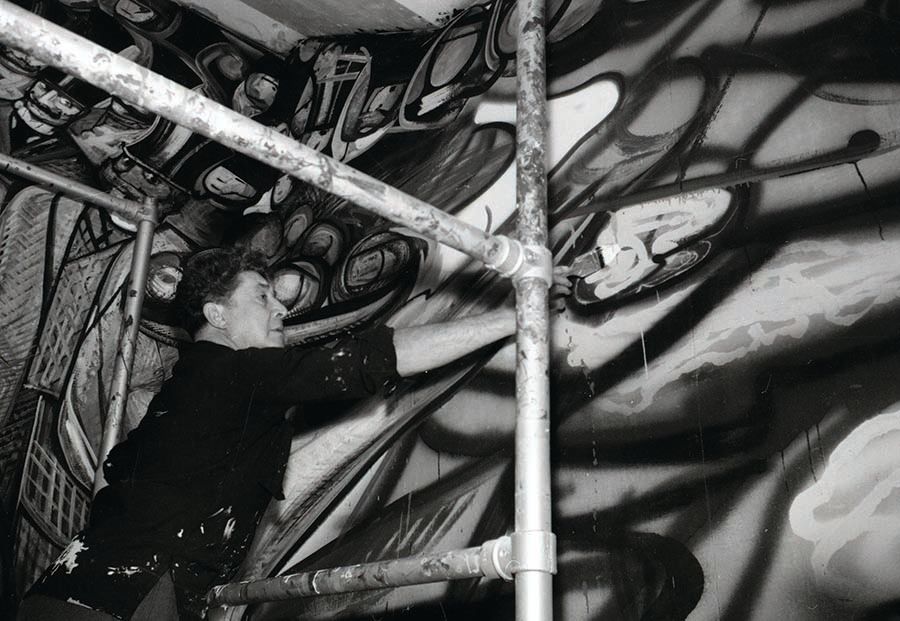 Archival footage of Siqueiros finishing a mural on scaffolding.

Manríquez adds: “Hispanic, Black and Indigenous people are still oppressed, targeted, racially profiled and misrepresented, and there is a lack of representation in everything from politics to the arts. During the Great Depression, when Siqueiros was painting this work, thousands of Mexicans were deported, some who were US citizens, and children were separated from their parents. This anti-immigrant sentiment is still the same nowadays.”

The film includes rarely-seen archival footage drawn from institutions like the National Autonomous University of Mexico, the Cineteca Nacional de Mexico and the Siqueiros estate, including a video captured by the NBC after his funeral in which Siqueiros is said to be “second to only Pablo Picasso” and the “most influential painter of the 20th century”. These clips “were essential to bring out into the world, even if complicated to source and acquire”, Manríquez says.

The documentary premiered at the Los Angeles Latino International Film Festival last month, and will have its television debut on the World Channel on 20 September as part of a slate of documentary films celebrating Hispanic culture, set to coincide with National Hispanic Heritage Month in the US, which kicked off this week.