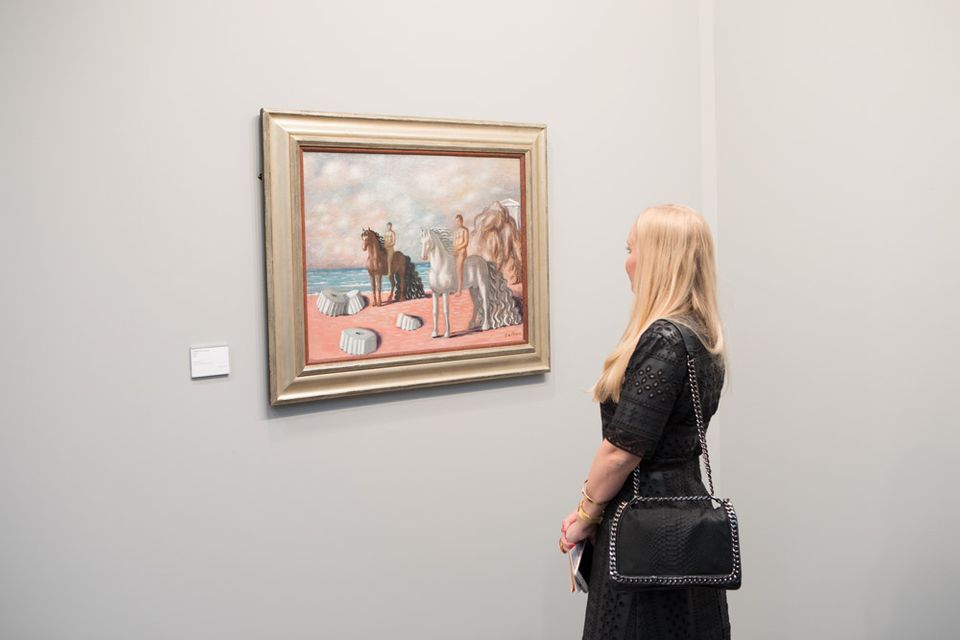 I Dioscuri (1934), with Acquavella, shows De Chirico’s use of recurring motifs David Owens

The enigmatic Italian artist Giorgio de Chirico (1888-1978) is experiencing a revival in London. De Chirico’s subject matter and the quality of his work—and therefore its market value—vary hugely, but Nahmad Projects and Tornabuoni Art are shedding light on the artist with shows in London this month.

At Nahmad, paintings by De Chirico from the 1920s to the 1970s have been displayed in a mise-en-scène by the contemporary Italian artist Francesco Vezzoli, while Tornabuoni Art has compiled the most comprehensive survey of the artist’s works to appear in London for 15 years. Meanwhile, at Frieze Masters, Acquavella Galleries is showing I Dioscuri (1934), a work depicting the twins Castor and Pollux from Greek mythology. Priced at $900,000, it is on the market for the first time since it was bought from Julien Levy Gallery, New York, in 1936.

De Chirico’s eerie, spatially ambiguous “piazza” paintings from 1914 to 1918 are his most famous, commanding seven- and eight-figure prices. Il Ritornante (1918) holds the record for the most expensive work by the artist sold at auction, having made €11m (with fees) in the sale of Yves Saint Laurent and Pierre Bergé’s collection at Christie’s, Paris, in 2009. In May this year, Il Sogno di Tobia (the dream of Tobias) (1917) made $9.2m (with fees) at Sotheby’s in New York—the artist’s second-highest price.

Comparable early paintings rarely come to market, as most are in US institutions or in Italy under restricted export. But De Chirico became more prolific with age, and Tornabuoni’s show argues that, whatever the subject, his preoccupations remained the same. “De Chirico maintains a fascinating thread of metaphysical thought throughout his career,” including in his writings, says Ursula Casamonti, the founder and director of Tornabuoni Art London. “With this exhibition, we think it will become apparent to the wider public.” The show, organised by Katherine Robinson of the Rome-based Fondazione Giorgio e Isa De Chirico, which authenticated every piece, contains more than 25 works from 1909 to 1968, priced between €50,000 and €6m; several pieces are on reserve and one work sold for €500,000 after the exhibition’s opening night.

Joseph Nahmad, whose family has been buying works by De Chirico for 30 years, says: “Without him, there’s no Magritte, no Ernst. He influenced the next 100 years.” Half of the 15 works in the Nahmad Projects show, Metafisica da Giardino, are for sale, priced from $75,000 up to $7m for Les philosophes grecs (1925). Ironically, “De Chirico thought his later works were better than his earlier ones and got upset that people said they weren’t as good, so he took revenge on his critics by backdating some of his later paintings,” Nahmad says. “Even today, that idea is too weird for some people to handle.”

At Frieze Masters, I Dioscuri features De Chirico’s repeated motifs of twins, pairs of horses, the sea and Classical columns. “He was one of the first artists to work serially,” says Michael Findlay, the director of Acquavella. “In later work, he recycled his earlier imagery, and for a while, the market took a dim view. But Warhol liked the repeated imagery, and in a way, Warhol’s paintings in tribute to De Chirico legitimised his replicas of early works.”

Findlay agrees that the market still makes a “strong value distinction” between the artist’s works of the 1910s and 1920s and later pieces, but notes that the artist is also growing in popularity in Asia; the last major painting by De Chirico that Acquavella sold, three years ago, went there.