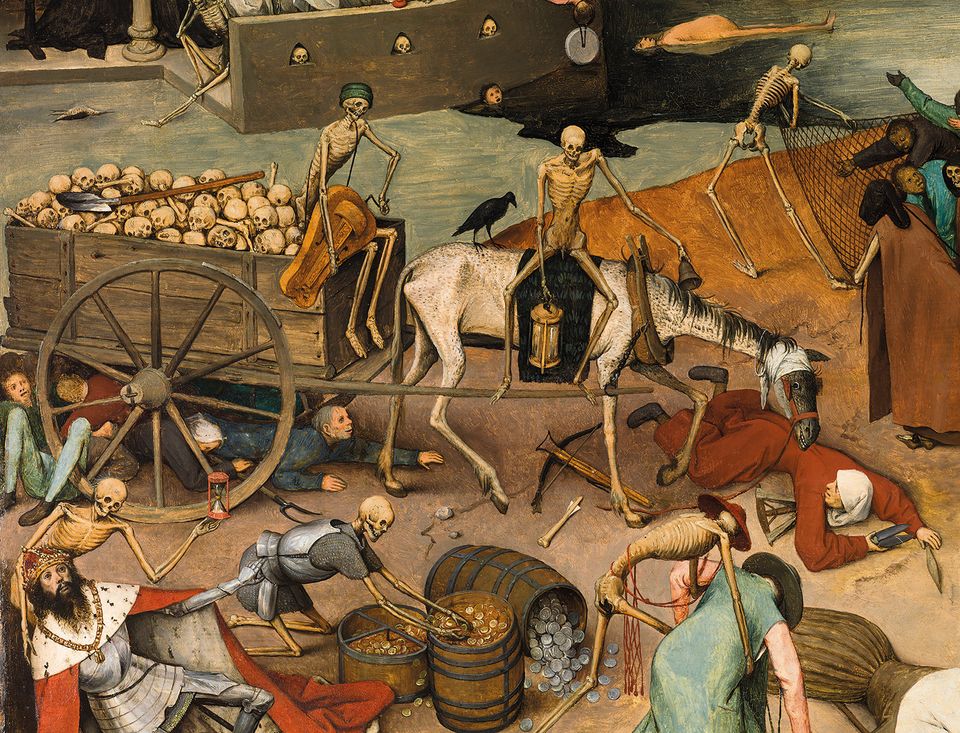 Lost details in The Triumph of Death (1562-63; detail) were reinstated by using copies of the work made by Bruegel’s sons © Museo Nacional del Prado

It has been one of the most challenging restorations undertaken by the Museo del Prado in recent years. The Triumph of Death (1562-63) by Pieter Bruegel the Elder, the mysterious painter whose oeuvre numbers only around 40 works, returned to the Madrid museum’s walls at the end of May. The danse macabre in which Death wins the battle over earthly things was the only work by Bruegel in the Prado’s collection until 2011, when the Spanish museum acquired the newly discovered Wine of St Martin’s Day (1566-67) for €7m.

Following almost two years of conservation, The Triumph of Death has regained its structural stability and original colours—transparent in the background and extraordinarily vivid in the foreground. “The work required a complete cleaning, which was particularly complex because of the thinness of the original layer of paint compared to the thickness of the retouches—a real crust,” says Maria Antonia López de Asiain, the conservator who restored the surface of the painting.

With the aid of copies created by the painter’s two sons and the use of infrared reflectography, it was possible to eliminate the areas of repainting and reintegrate lost details. The removal of varnish applied during previous interventions has restored the original colours, recovering the characteristic bright tones of the blues and reds and the depth of the landscape.

The painting depicts rich and poor, young and old, peasants and priests overrun by an army of skeletons, evoking the influence of Hieronymus Bosch and Medieval art but tempered by an almost humorous approach. López de Asiain describes the restoration process as “two years of constant discoveries”. She says: “Even when you know it by heart, it is a work that always reveals new details. From a contemporary perspective, it seems like an apocalyptic scene but for Flanders at the beginning of the Counter-Reformation, it was a completely natural subject.”

The conservator José de la Fuente, meanwhile, restored the painting’s support, which is made up of four horizontal oak panels. He levelled the cracks in the top panel and removed a cradle that had constrained the natural hygroscopic movements of the wood. A beech stretcher was designed to match the curvature of the panel and attached to the painting using a reversible system of nylon screws and stainless-steel springs.

The work is now on loan to the major exhibition marking the 450th anniversary of Bruegel’s death at the Kunsthistorisches Museum in Vienna (until 13 January 2019). “It [is] the first and last time that we [will] lend it,” says the Prado’s director, Miguel Falomir.