The work, which was painted live at the event, featured Urdu calligraphy and images of women in hijabs 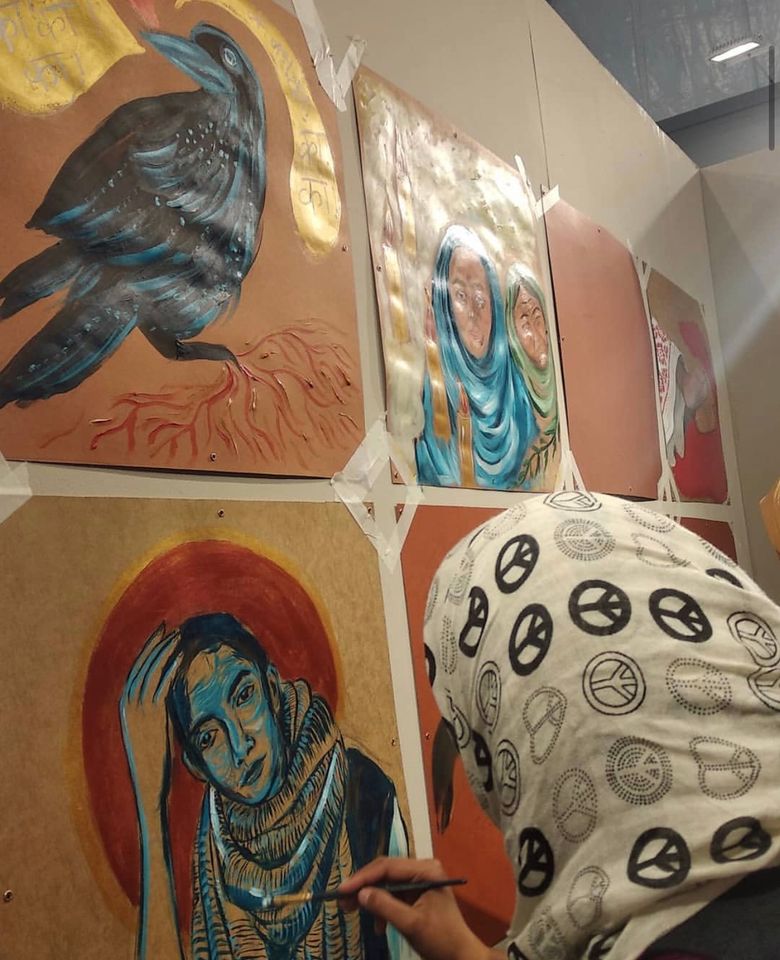 An artist working on The Wall: Community Art Building Mural at the India Art Fair 2020 prior to intervention by the Delhi Police Courtesy of @engendereddelhi

The Wall: Community Art Building Mural (2020), which was painted by a group of invited artists live at the booth of the Italian Embassy Cultural Centre at the fair, was inspired by the protestors of Shaheen Bagh, a New Delhi neighbourhood around 4km from the event that is the site of an ongoing women-led demonstration against the 2019 Citizenship Amendment Act (CAA).

The Citizenship Amendment Act, pushed through parliament by the BJP Party in December, offers Indian citizenship to migrants from neighbouring countries but not if they are Muslim. Critics say the law is part of a wider strategy to marginalise India’s 200 million Muslims and establish a Hindu theocracy in the country. The new law has sparked widespread and ongoing protests.

The work, which was organised by the Delhi-based arts organisation Post-Art Project, was due to be raised like a banner and displayed during the performance of a protest song.

In an Instagram post, Post Art Project said that Delhi police officers came to the booth 20 minutes before the performance, apparently responding to an "anonymous complaint" about the work's content. The complaint, Post Art Project say, was based on the inclusion of Urdu (the national language of Pakistan that is spoken throughout parts of northern India) in the work and images of women in hijabs.

After the police left, the fair organisers instructed the work to be taken down from the Italian Embassy Cultural Centre's stand and cordoned off the booth.

In a statement, IAF's management said that the fair had not been made aware of the live work, which was the reason for its removal rather than its content. "Our contract with the Italian Embassy Cultural Centre, consistent with others, required them to share with us the details of all activities which were to take place at their booth over the course of four days of India Art Fair."

However, Post-Art Project co-founders Gargi Chandola and Yaman Navlakha said in their Instagram post that the schedule of the entire event was "repeatedly and clearly shared with the India Art Fair by the curator".

The organisers of IAF, which closed yesterday, placed a sign by the tent's entrance stating that it was "aware of the events taking place across Delhi and the country" and that there was "a zero-tolerance policy against banners or sloganeering at the fair".

Nonetheless, a small number of works at the fair made reference to the ongoing protests and the growing level of dissent against the country's government.

Before the fair's opening, The Art Newspaper asked IAF's director Jagdip Jagpal whether the fair would be willing to host a form of artist-led protest regarding the citizenship laws. Jagpal replied that "she strongly believes in art as a form of freedom of expression" and hopes to "provide a safe platform to encourage greater exchange and widen dialogues".