Event, organised by grassroots climate justice group BP or not BP?, highlighted relationship between oil companies and war in Iraq 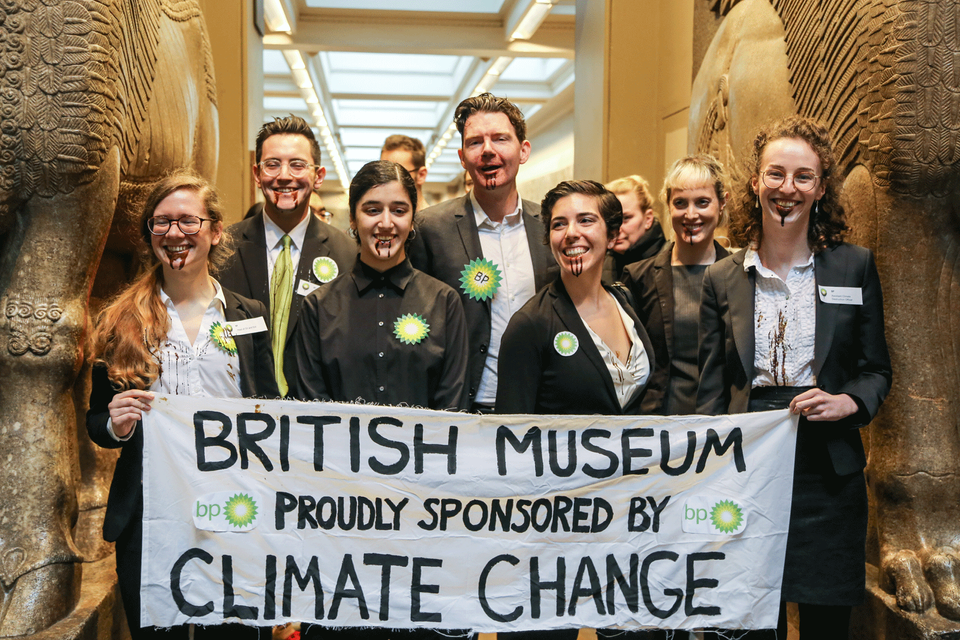 On Saturday afternoon, the Great Court of the British Museum was taken over by a flood of protesters demonstrating against British Petroleum’s (BP) sponsorship of the temporary exhibition I Am Ashurbanipal: King of the World, King of Assyria (until 24 February). The event was organised by "BP or not BP?", a grassroots climate justice group that draws from the world of theatre to craft protests against financial partnerships between fossil fuel corporations and the culture sector.

The British Museum is one of five cultural organisations to receive sponsorship from BP as part of a £7.5m deal that came into effect in 2018 and will extend over five years. I Am Ashurbanipal, one of the shows to receive BP sponsorship, features objects from the Assyrian capital of Nineveh, in modern-day Iraq. At Saturday’s protest, the group sought to highlight the relationship between BP and the Iraq War: one of the revelations of the Chilcot Report was that BP and other fossil fuel companies were lobbying for postwar access to the Iraqi oil as early as 2002. The existence of meetings between the British government and oil companies was first publicised by the campaigner Greg Muttitt in his 2011 book Fuel on the Fire. The museum takeover fell one day after the anniversary of massive global protests against the Iraq War in 2003.

True to BP or not BP?’s style, the demonstration melded performance and politics: the event included not only speeches but also singing and spoken word. At the climax of the protest, the black-clad participants surrounded the museum’s central rotunda while holding up banners with text underscoring “the links between BP, oil sponsorship, colonialism, climate change, stolen culture…and the Iraq War”, said BP or not BP? member Danny Chivers.

Another co-organiser, Ibtehal Hussain of Campaign Against Arms Trade, said she felt proud that Saturday’s action continued the legacy of the 2003 protests while also shining a light on continuing environmental and socioeconomic crises in Iraq. “We can’t return the hundreds of thousands of people that died or the millions of people that have been affected during the war and after the war, but we can demand justice and accountability”, she said. “We haven’t forgotten, we haven’t forgiven, and we’re still fighting for justice for the Iraqi people.”

As well as the protest, Hussain and others created a counter-exhibition of contemporary Iraqi art entitled I Am British Petroleum: King of Exploitation, King of Injustice. The show will be on view at The P21 Gallery through 2 March.

CLARIFICATION: This article was updated on 19 February to reflect that although the Chilcot Report discusses meetings between the British government and oil companies, the campaigner Greg Muttitt was the first to publicize their existence in his 2011 book Fuel on the Fire.