The monumental work, on loan from a local college and always meant to be mobile, was painstakingly transported across town

After four years of logistical planning, Diego Rivera’s monumental 1940 mural Pan American Unity has been painstakingly moved to a lobby at the San Francisco Museum of Modern Art (SFMoMA) and gone on view to a broad public. The last mural executed by the artist in the US, the 60,000-pound, 74ft-wide work had previously been housed at City College of San Francisco, where it attracted few visitors.

Rivera painted the mural, whose full title is The Marriage of the Artistic Expression of the North and of the South on This Continent, as a crowd watched at the 1939-40 Golden Gate International Exposition on Treasure Island in San Francisco Bay. It was stored for years afterward before being moved to a City College theatre. Beginning in May, the mural’s panels were trucked across town, one or two at a time, at 5mph, and then gingerly lifted by gantry into the SFMoMA lobby.  To make it inside, each panel had to be turned at an angle to fit down an alley and then through a large glass pane that had been removed.   The largest ones weighed two tons. 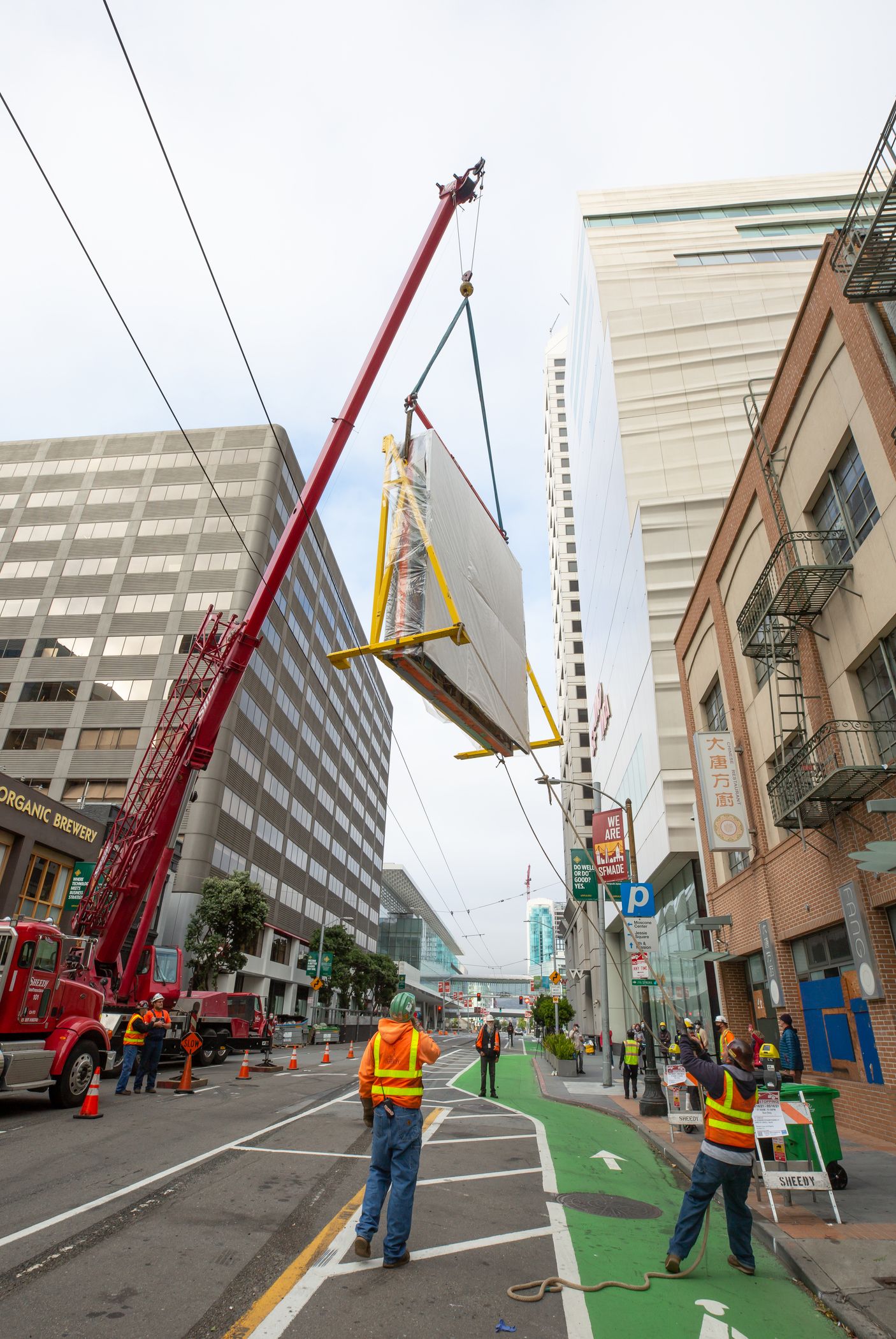 Today the work is considered one of Rivera’s greatest murals. At the invitation of one of San Francisco’s leading architects, Timothy Pflueger, Rivera and his team toiled on it from June to December 1940, using the traditional fresco technique of painting into wet plaster.  Because the mural was intended to be mobile, it was not painted directly on a wall but onto 10 panels of layered plaster over cement held together by steel frames.

“He had perfected his technique for portable murals by this time,” says Michelle Barger, head of conservation at SFMoMA.  At 22ft high and 74ft wide, the towering mural colourfully interweaves themes of the Americas, creativity and current events and presages a major Diego Rivera retrospective planned by the museum next year.

“I’d always wanted to do a Diego Rivera show,” says SFMoMA’s director, Neal Benezra. “He  had such an impact on art in this city, on the whole mural painting tradition in this city.  Unless you see the murals, you really don’t get the whole picture [of the artist].”

Five years ago, he and museum staff members started thinking about how they might borrow and transport Pan American Unity from City College.  The four years of research, logistical coordination and fundraising needed to bring the project to fruition has cost millions, although the museum declined to give a specific figure. 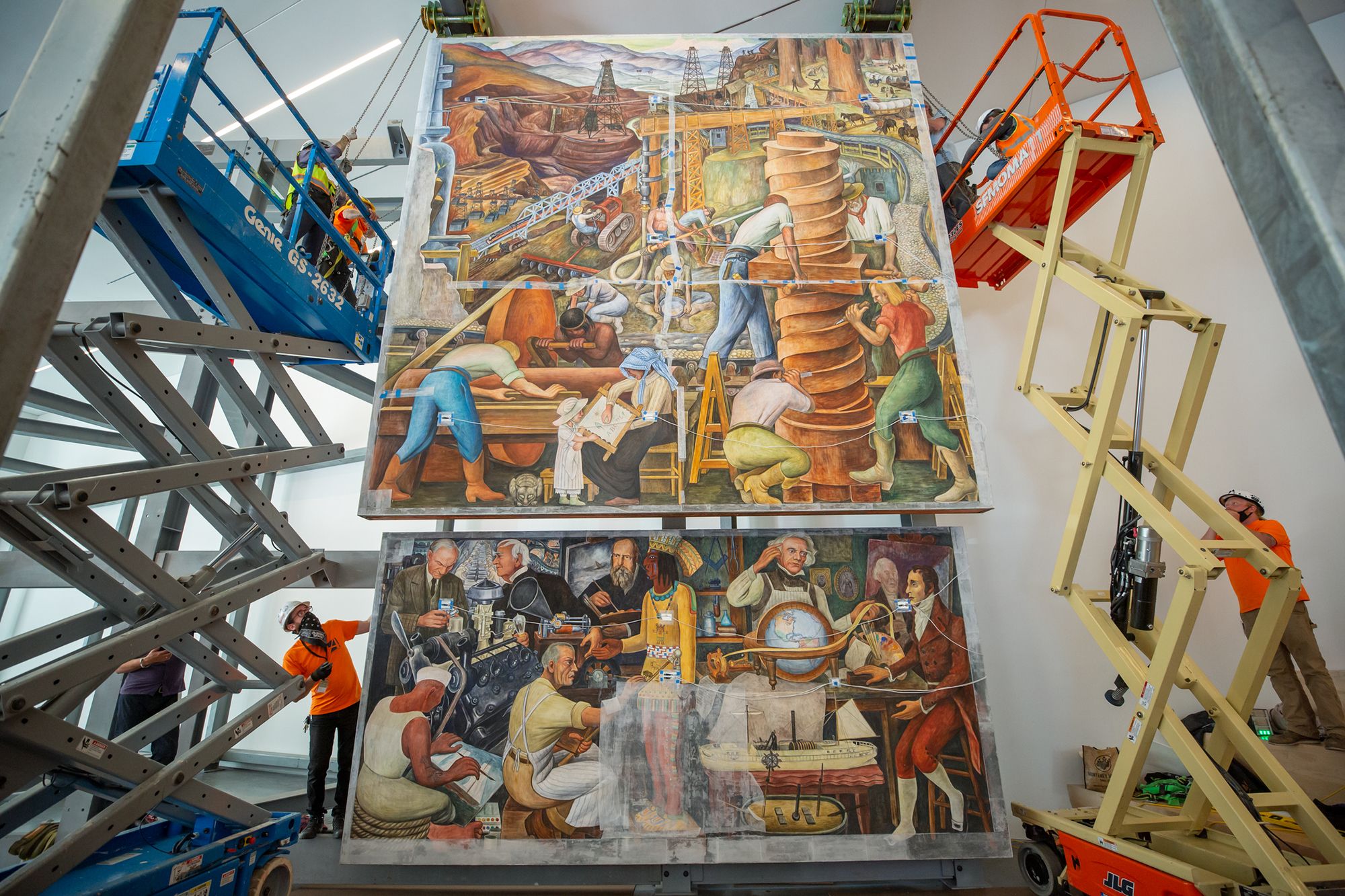 In its central panels, the mural depicts a tower evoking the Aztec goddess Coatlicue on one side and machine age technology on the other.  Interwoven throughout are bits of South and North American history, the celebration of invention and crafts, and references to the unfolding war in Europe—the spectral faces of Hitler, Mussolini, and Stalin lurk in one section, next to scenes of Charlie Chaplin playing a comedic version of Hitler in the 1940 film The Great Dictator. Under elegant arcs formed by the figure of a high diver, a map of Treasure Island and the San Francisco skyline appear in the upper register.  Frida Kahlo, from whom Rivera was divorced at the time, makes a prominent appearance holding paint brushes and a palette, and Rivera himself is seen nearby from the back.

Visitors can enter the street-level lobby where the mural is displayed at no charge. The loan will continue until City College completes a new performing arts centre, which is anticipated in 2023.