For six and a half years, from the height of the recession in 2009, the New York-based artist Michael Mandiberg woke up every Saturday, turned on his computer and discovered which US banks had failed that week. Then, he scoured Google to painstakingly record each newly defunct bank’s logo before it disappeared from the face of the Internet. The results of this ritual will go on show in a vacant office building on Wall Street from 15 September, the anniversary of the Lehman Brothers bankruptcy filing.

“I started thinking about the way in which these logos disappear,” Mandiberg says. “Logos, as we know them, are a post-Second World War phenomenon in which the corporate entity is able to signify that it will always be powerful. Think about the Chase [bank] logo: it is like an immovable boulder, but it is also a safe, and a jewel. It literally and symbolically manifests permanence.”

But as the recession proved, these logos, and the banks they represent, are not permanent. At the height of the recession, the Federal Deposit Insurance Corporation (FDIC)—a government agency established during the Great Depression to protect consumers when a bank goes under—was taking over as many as eight banks a week. 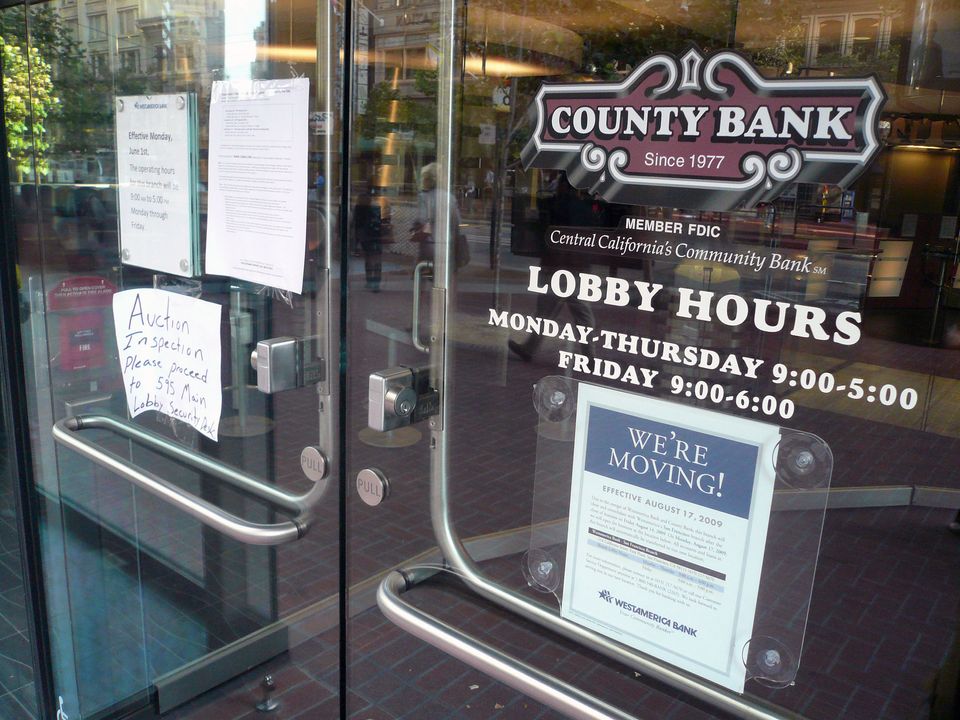 The failed County Bank was on Market Street in San Francisco, a few blocks from the Embarcadero and Ferry Terminal

Every Friday, the FDIC would descend on failed banks like a financial SWAT team. By Monday, they had reopened them under a different name. “The history of failure is erased,” Mandiberg says. For his project, FDIC Insured, the artist has taken the logos of 523 failed banks, and burned each one onto the cover of a book about investment, business management or financial planning—another relic of more profligate times. (Titles include: Be a Landlord with No Money Down and Investing by the Stars.)

Mandiberg—who is best known for another quixotic task, his endeavour to print out all of Wikipedia—aims to preserve the logos in a book and online archive due to be published this summer ahead of the show this autumn at 40 Rector Street. A portion of the series was first shown at the Pacific Northwest College of Art's Feldman Gallery in Portland, Oregon, in 2010. The New York installation, organised by Art In Buildings, a public art programme affiliated with the real estate firm Time Equities, runs until December, and Mandiberg notes it is scheduled to close just in time for Christmas bonus season on Wall Street.

Mandiberg will present all 523 books on racks inside an empty corporate suite on the building’s 14th floor, formerly a construction office for Time Equities. Viewing the logos en masse, it quickly becomes apparent that many financial institutions prefer similar fonts, the colour blue, and names like “Security Bank” and “First Bank”.

These days, Mandiberg says, the FDIC takeovers have slowed to a trickle. The book covers are like ghosts of corporations past, but they also represent the thousands of jobs lost during the recession at tiny local banks across the country. “They look like tombstones—the whole thing feels like a memorial,” he says.