Several charitable and crowdfunding campaigns have launched since the fire 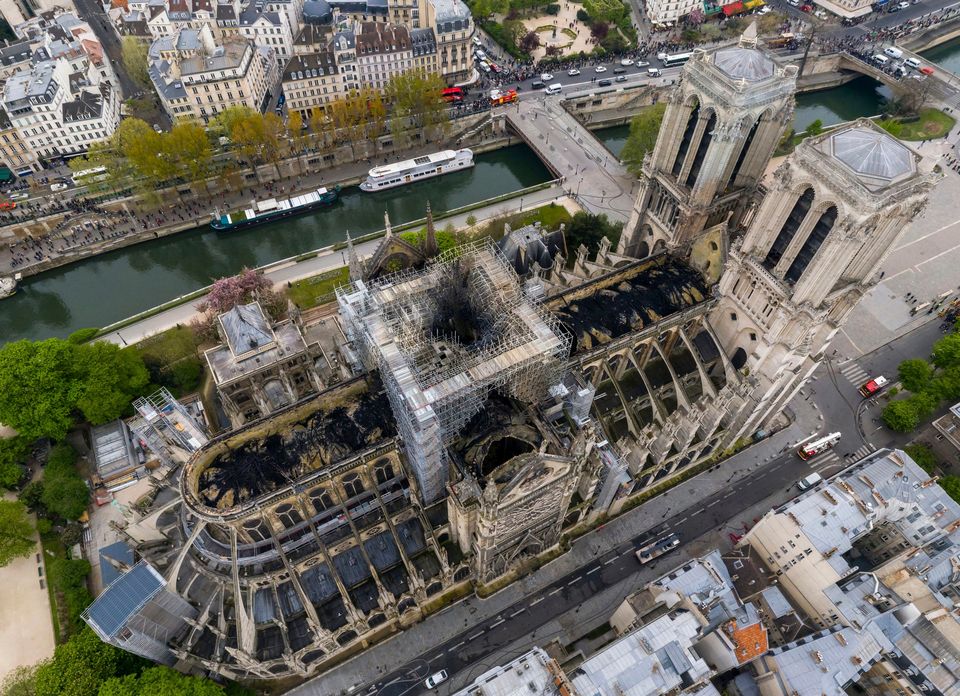 An aerial shot shows the fire damage to Notre Dame cathedral in Paris Gigarama.ru via AP

Private donors and crowdfunding campaigns, many of them in the US, have joined the efforts of France’s richest families to rebuild Notre Dame cathedral after a fire ravaged the building. Nearly €1bn is estimated to have been raised for the restoration so far.

The billionaire investor and former Museum of Modern Art (MoMA) trustee Henry Kravis, and his wife Marie-Josée Kravis, MoMA’s president emerita, donated $10m, to the reconstruction, according to statement released by Kravis’s firm KKR. The New York art dealer Larry Gagosian meanwhile announced on Tuesday that he would be organising a benefit exhibition at his Paris gallery. “In the spirit of the gallery’s ongoing commitment to artists and the arts, all proceeds will be directed to supporting the renovation and restoration of the medieval cathedral, an icon for the city and its people, France, and the world,” Gagosian said in a statement. The Brazilian philanthropist Lily Safra, the widow of the banker Edmond Safra, has pledged €20m to the cathedral. The generous donation has met with some backlash in Brazil, however, since Rio de Janeiro’s gutted National Museum did not draw the same level of support from the country's wealthy.

Numerous public campaigns have been launched in the two days since the first struck. After an “outpouring of interest”, the New York-based French Institute Alliance Française announced a Notre-Dame Restoration Fund to collect tax-deductible contributions from US-based members and donors. "Monday’s devastating fire at Notre-Dame was heartbreaking for our FIAF famille. This cathedral and its 850 years of history is a symbol of France—of home—for many of us," says Marie-Monique Steckel, FIAF's President. "Since then, I have been contacted by numerous donors who would like to contribute to the rebuilding effort. For that reason FIAF will pool their support and present a single, significant contribution to the cathedral’s restoration as a symbol of French-American solidarity."

Other campaigns have been started by the French Heritage Society in New York, the Basilica of the National Shrine of the Immaculate Conception in Washington, DC, the Fondation du Patrimoine in Paris, and several individuals on the crowdfunding site GoFundMe. The Fondation Avenir du Patrimoine a Paris, which is also seeking donations, has warned in a tweet that people looking to help should use “prudence regarding multiple private French or foreign fundraisers whose surge has coincided with the event”.

The glut of interested donors comes lamentably late, says Michel Picaud, the cathedral’s chief fundraising adviser and president of the US-based charity Friends of Notre Dame. The group, which had been aiming to raise €20m for a much-needed restoration of the cathedral before the fire, was so inundated by enquiries that its donation website temporarily crashed on Tuesday. “It’s very, very frustrating,” he told NBC News. “I think if the restoration work had been already carried out it would have minimised the risk of fire, but as long as we do not know the reason for this catastrophe it is too early to say for sure.”

The generosity engendered by the catastrophe at Notre Dame has spilled beyond Paris, inspiring donors to give more than $1.8m via GoFundMe to rebuild three historically black churches in Louisiana that were burned down last month by an arsonist. “It’s a blessing,” the Reverend Gerald Toussaint, the pastor of Mount Pleasant Baptist Church in St. Landry parish, told CNN. “It’s going to help our community. What the devil meant for bad, God’s going to turn it into something good.”