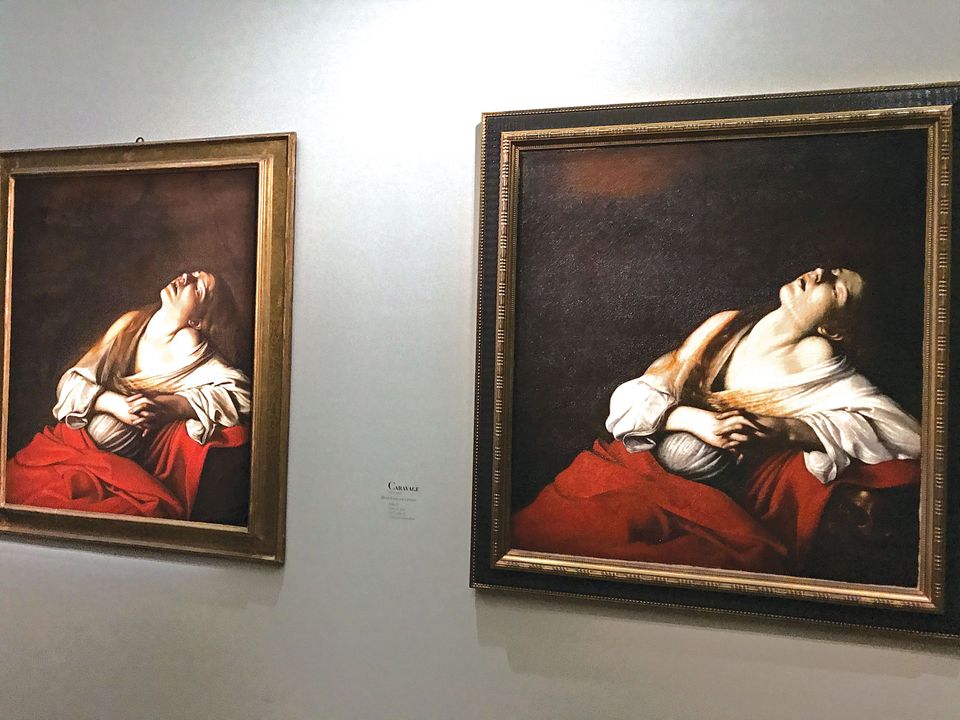 Showing two versions of a painting side by side is “one of the best things exhibitions can do to advance scholarship”, according to the Italian Baroque expert Richard Spear Gareth Harris

The inclusion of two paintings depicting Mary Magdalene in a Paris show dedicated to Caravaggio has sparked controversy among scholars of the maverick 16th-century Italian artist.

The exhibition at the Musée Jacquemart-André, organised by the Institut de France and Culturespaces, an independent company, includes ten works by Caravaggio, seven of which are shown in France for the first time—including the famed Lute Player (1595-96) from the State Hermitage Museum in St Petersburg.

However, the decision to include two versions of Mary Magdalene in Ecstasy—one painted in 1606 and authenticated only in 2014, the other painted around the same time, known as the “Klein Magdalena”—has reignited debate around their attributions.

“It is unusual to see both versions together. It is therefore interesting to see them side by side,” says Gert Jan van der Sman, the professor of the history of drawing and printmaking at Leiden University. “But to my mind, both [works] are 17th-century copies after a lost or as yet untraced original. Most scholars are sceptical about the [2014] attribution to Caravaggio,” he says.

John Gash, a senior lecturer in art history at the University of Aberdeen and a Caravaggio expert, says he is “sceptical” of the version that was identified as authentic in 2014, but is looking forward to seeing the works next to each other in Paris “in order to judge their relative merits”. Another scholar who asked to remain anonymous conceded that “the issues of replicas and authentication in Caravaggio studies are such a minefield.”

Other scholars welcome the move. Richard Spear, an Italian Baroque expert at Princeton University, says: “It is not unusual for exhibitions to show versions of a work for study. Indeed, that is one of the best things exhibitions can do in order to advance scholarship. This is a good opportunity to form an opinion, especially on the version attributed to Caravaggio [in 2014] by Mina Gregori. Dawson Carr, who organised the Caravaggio exhibition at London’s National Gallery in 2005, concurs: “It doesn’t really matter what individual scholars conclude—the important thing is that the paintings are seen and compared.”

The painting attributed to Caravaggio in 2014 was found in a European private collection and was identified as authentic by Mina Gregori, an Italian art historian and prominent Caravaggio scholar. In the catalogue of the current exhibition in Paris, Gregori writes that “the execution and the stylistic examination of the painting unquestionably confirm the hand of the master: the quality of the workmanship, the intensity of the expression.”

Gregori partly based her attribution on a 17th-century wax Vatican customs stamp found on the back of the painting stating that this Magdalene was “for the benefit of Cardinal Borghese of Rome”. The work was due to be sent to Chiaia, an affluent neighbourhood of Naples where one of the artist’s most high-profile patrons, Costanza Colonna, lived. Colonna may have acted as a go-between, commissioning and forwarding the work to Cardinal Borghese.

Rossella Vodret, a curator at the Palazzo Barberini in Rome, endorsed Gregori’s attribution in 2016 by including the work in the exhibition Caravaggio and His Time: Friends, Rivals and Enemies, at the National Museum of Western Art in Tokyo.

Mary Magdalene in Ecstasy was previously only known through copies made by followers of the artist. At least eight reproductions are thought to be in existence, adding to the mystery around the fate of the original. The copy that is housed at the Musée des Beaux-Arts in Marseilles, for example, is believed to have been made by the Flemish artist Louis Finson.

The curator Francesca Cappelletti defends her decision to include the work in the show, saying: “The Magdalene discovered by Mina Gregori in 2014 shows an incredible quality of modelling and expression. This is an incredible occasion to see the paintings together. Most scholars haven’t seen them so far, and it will be very interesting to compare opinions in a [possible future] seminar.”

The “Klein Magdalena”, meanwhile, is on loan from a private collection in Rome. Cappelletti points out that this version was discovered after the Second World War by the critic Roberto Longhi, and was published by the late art historian Maurizio Marini. It was included as a Caravaggio work in the exhibition Visions and Ecstasy: Masterpieces in Europe between 1600 and 1700 held at the Vatican Museums in 2003.