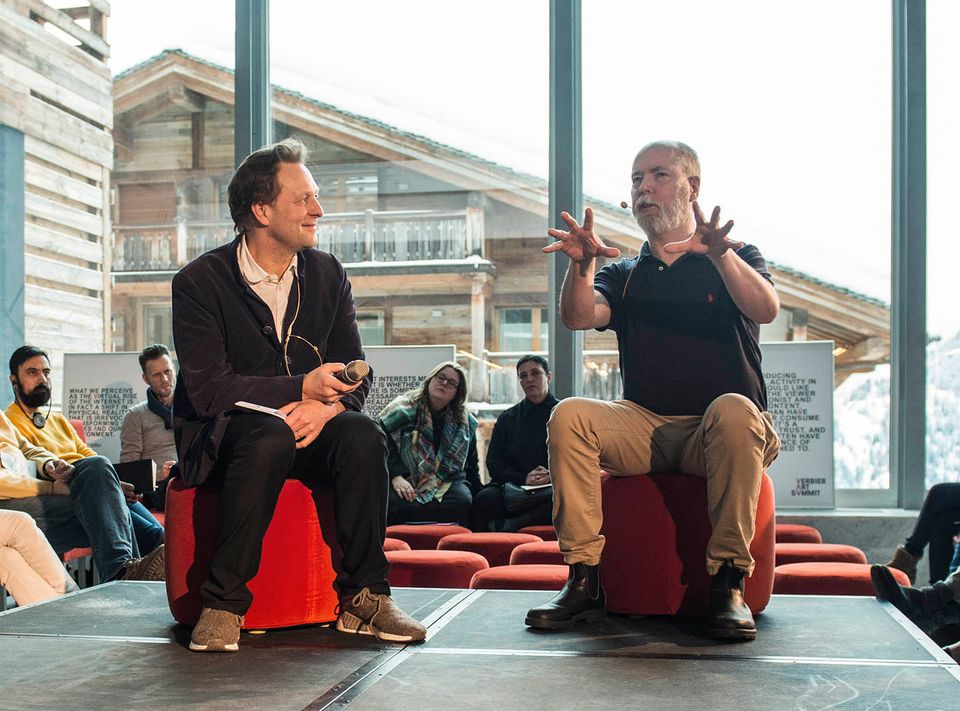 “Virtual Reality [VR] is this asteroid that’s going to hit the planet in 2023,” said the Canadian novelist and artist Douglas Coupland, citing Google’s prediction that, by then, everyone will own at least one VR headset. Coupland, who made the forecast while speaking at the Verbier Art Summit in Switzerland over the weekend, added: “The post-millennial generation, around one and a half generations from now, is going to have people who have no connection to the real world”.

Describing VR as “probably the hottest medium, because it is completely immersive”, the Generation X author went on to controversially suggest: “Maybe books are overrated. Maybe they are an interim technology on the way to VR and we can now get rid of our books.”

The Verbier Art Summit, founded by Anneliek Sijbrandij and organised by Daniel Birnbaum, the director of the Moderna Museet in Stockholm, gathered around 100 cultural leaders and thinkers. They included the Danish-Icelandic artist Olafur Eliasson, the British video artist Ed Atkins and the VR specialist Dado Valentic. Local collectors, whose luxury chalets were the sites of private morning debates, were joined by other art patrons including Maja Hoffmann and Dakis Joannou.

Art in the Digital Age was the theme of the conference, which loosely attempted to address the question of what technology means for the traditionally conservative and technophobic art world, which trails behind the gaming, movie and pornography industries when it comes to VR.

Eliasson is a pioneer in creating VR works; he recently produced an immersive piece, Rainbow, with Acute Art, a VR gallery Valentic launched last year. Eliasson believes that VR is “bringing a substantial revolution”. He is more sceptical, however, about who takes responsibility for the medium, which is still largely unregulated.

“I have less confidence in the public sector regulating it,” he said. “People trust the cultural sector more than they trust politicians, if you look at the EU it is falling apart. Culture is currently the most stable and trustworthy sector of society.”

One of the biggest challenges is the disembodiment experienced when wearing VR goggles, Eliasson said. “When you look down you don’t have a body, you don’t have hands. When I have the glasses on I am always thinking, ‘God I look really stupid’.” Another major issue is the isolation of plugging yourself into a headset, shutting the viewer off from others. Eliasson is currently developing a version that can accommodate more than one person. “It’s not ready yet, but soon,” he said.

Other artists cited the limitations of the medium, namely clunky interfaces, the fact that you remain tethered to a computer when in use and the exorbitant production costs.

Birnbaum suggests the art world’s expectations may be too high. “There’s a tendency to think that technology will deliver us a utopia, then there’s the Elon Musk school of thought that sees technology as something more dangerous than nuclear power,”  he said. “Even if hopes are exaggerated, you can’t deny that technology has changed the distribution of art, its markets and even its ontology.”

It seems VR still has a long way to go before being embraced by the art world. Coupland anticipates that, by 2023, “the VR equivalent of the bicycle wheel on a stool is going to happen”. Birnbaum concurs that the search is on. “The Duchamp of the VR world is yet to emerge,” he said.