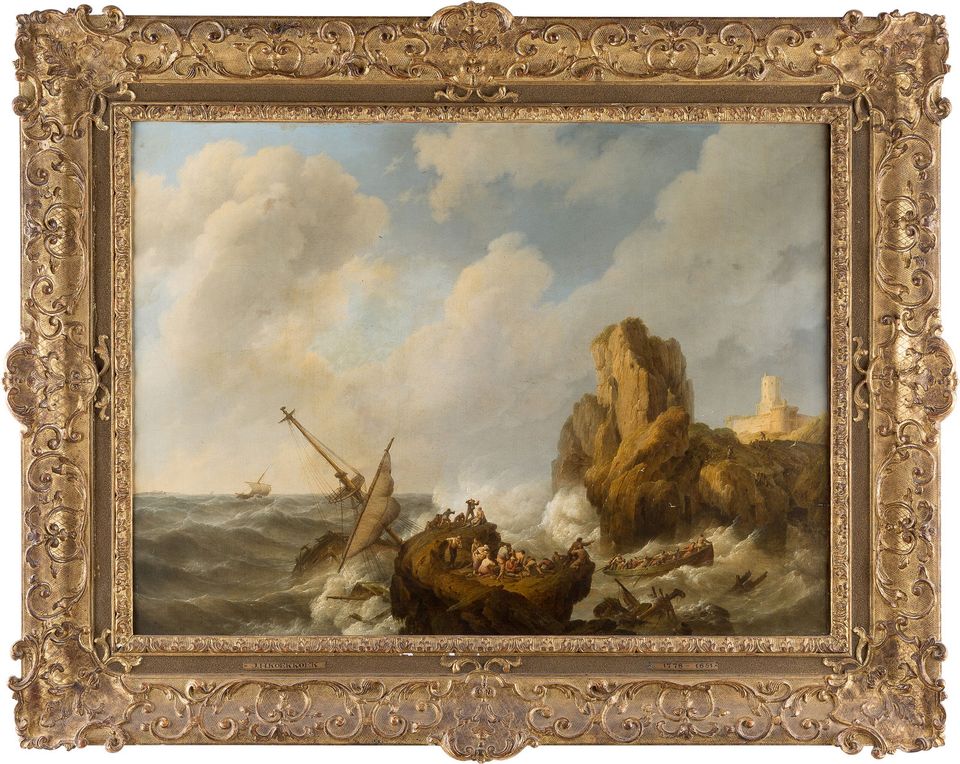 A Dusseldorf auction house returned on 19 November an 18th-century painting of a Dutch maritime scene by Johannes Hermanus Koekkoek to the heirs of Max Stern, a Jewish art dealer who fled Nazi Germany in 1938.

The painting was offered for sale at Hargesheimer Kunstauktionen. The Max Stern Art Restitution Project, which lists the art Stern was forced to sell before emigrating on its website, received a tip from someone within the European art trade. After negotiations with the auctioneer, Frank Hargesheimer, and the painting’s consignor, a Rhineland art dealer who did not wish to be identified by name, restituted it to Stern’s estate. Hargesheimer says he compensated the consignor for the painting.

The auction house says it “is aware that according to German law most claims for restitution of Jewish cultural property are time-barred.” But in a statement, it said it rejected the legal arguments. “Hargesheimer sees a moral duty to give this painting back to the Max Stern Foundation after the inconceivable, inhumane barbarism of the Nazi dictatorship.”

Max Stern took over his father’s Dusseldorf art gallery in 1934, a year after Adolf Hitler seized power. Under the Nazis, he was no longer allowed to practice his profession after 1935 and was forced to liquidate his gallery and sell the contents. He fled to London in 1938, and later settled in Canada. On his death in 1987, he left the bulk of his estate to three universities—Concordia and McGill in Montreal, and the Hebrew University in Jerusalem. In 2002, the universities launched a campaign to recover his lost art.

The Koekkoek painting, Storm at Sea, is the 18th work that the Max Stern Restitution Project has recovered. It is seeking around 400 altogether.

“Moments like these are far too rare: a European auction house and a painting’s consignor who want to achieve just and fair solutions,” Ronald Lauder, the chairman of the Commission for Art Recovery and president of the World Jewish Congress, said in a statement. “Nazi-era stolen art continues to be laundered by auction houses that know perfectly well what they are selling.”

Another work that Stern was forced to sell before fleeing Germany, Cairo by Emile Charles Wauters, was offered for sale this autumn by the Cologne auction house Lempertz—the same company that managed the 1937 auction of his inventory. After the Holocaust Claims Processing Office in New York alerted Lempertz to the provenance of the picture, the auction house returned it to the unidentified consignor.

The Stern project has also claimed a painting in the Dusseldorf city collection and is awaiting a decision by the German Advisory Commission, which mediates in disputes over Nazi-looted art, on a painting in Bavaria’s public collections.

A conference in Berlin on November 26-28 will mark the 20th anniversary of the Washington Principles—international guidelines endorsed by 44 countries on how to handle Nazi-looted art in public collections. “I expect the topic of private collections and private museums to be addressed there and hopefully a solution will be found soon,” said Lauder, who is scheduled to speak at the conference.

Last week, Germany's Culture Minister Monika Grütters announced that she is planning to set up a help desk to give claimants guidance in navigating German museums and institutions. She also said she plans to make it easier for claimants to have their case heard by the Advisory Commission. At present, both sides must agree before a case can be heard by the panel. Grütters said museums that refuse to submit claims to the panel could face a withdrawal of government funding.

CORRECTION: This article was amended on 23 November. An earlier version incorrectly stated that Lempertz did not react to the questionable provenance of Cairo by Emile Charles Wauters. The auction house had in fact returned the picture to the consigner.