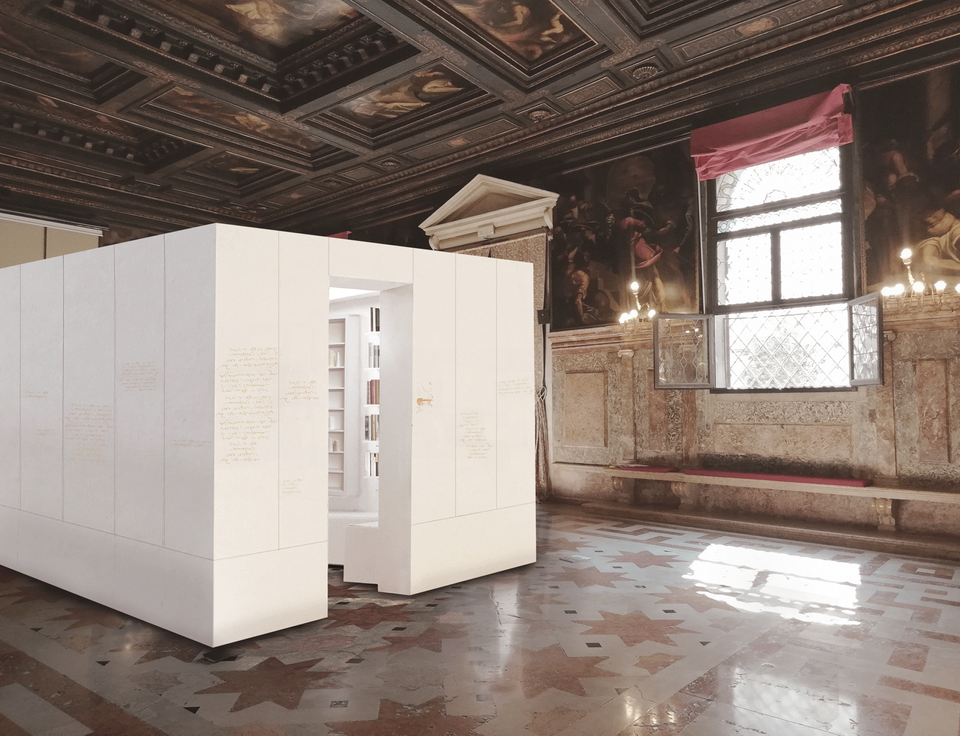 The proposed installation in the Ateneo Veneto © Edmund de Waal. Courtesy the artist

The author and ceramicist Edmund de Waal will unveil a major new work in the 500-year-old Jewish Ghetto in Venice to coincide with the opening of the 58th Biennale. De Waal’s installation, part of a two-part exhibition called psalm (7 May-29 September), will go on show in a 16th-century synagogue located in the Ghetto Novo in the north-western Cannaregio sestiere (district) of the city.

“New installations of porcelain, marble and gold [displayed in 12 vitrines] will reflect the literary and musical heritage of this extraordinary place. For the first time the Women’s Gallery within the synagogue will hold contemporary art,” a project statement says.

In 1516, authorities in the lagoon city ruled that Jews ought to live separately from Christians; when Napoleon conquered Venice in 1797, the Jewish population was granted freedom. The synagogue is part of the Jewish Museum, which was founded in 1953 by the Jewish Community of Venice; it has been restored with support from the heritage organisation Venice in Peril.

De Waal says in a statement: “This is the project I have always dreamed of doing. It is about exile; what it means to have to move to another country, to speak another language. It brings new installations based on the Psalms, the poetry of exile, into some of the most beautiful spaces of the Ghetto.”

For the second part of psalm, de Waal is taking over the Aula Magna room on the ground floor of the Ateneo Veneto, a 15th-century space used for cultural events. The artist will build a pavilion within the building housing 2,000 books by exiled writers from Ovid to the present day (all of the publications will be in translation). De Waal will inscribe the names of lost libraries on the exterior of the specially built structure.

Four vitrines of porcelain vessels, inspired by Daniel Bomberg’s Renaissance printing of the Talmud, will hang on the walls within. Bomberg (1483-1549), who employed rabbis at his Venetian publishing house, was one of the most influential printers of Renaissance texts. A programme of events, performances and debates across both spaces will explore themes such as migration and exile.

Late last year, de Waal announced plans to send on long-term loan to the Jewish Museum in Vienna his collection of netsuke which were at the heart of his 2010 memoir The Hare with Amber Eyes.