The institution welcomes the first visitors to its renovated home in the former Fix brewery this week, after years of delays 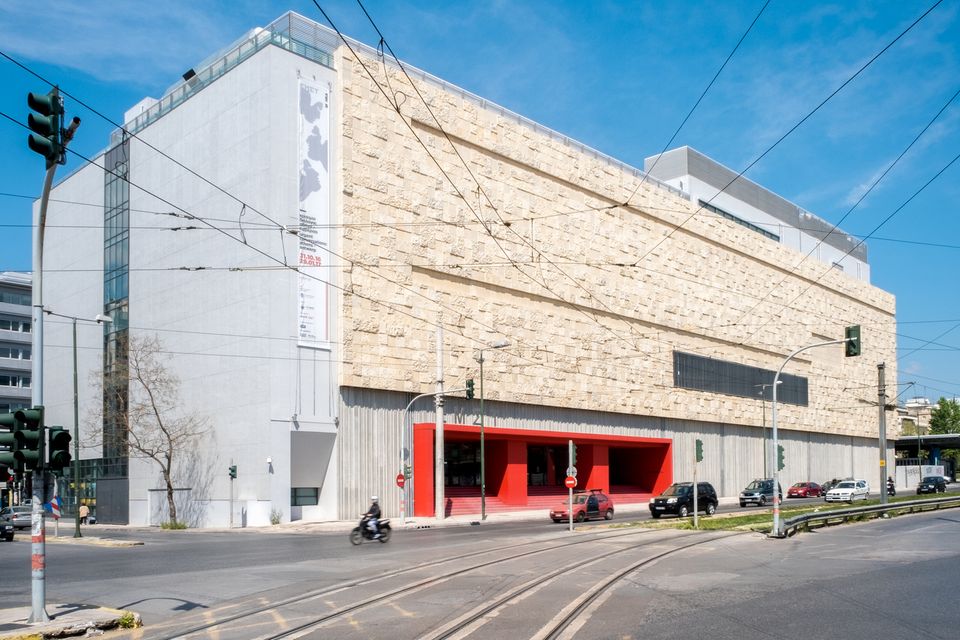 More than 20 years after it was founded, and following several long delays in the opening of its renovated home in the former Fix brewery in Athens, EMST—National Museum of Contemporary Art welcomed its first visitors this week. On Monday, 24 February, students and press were given a preview of the permanent collection and on Friday the building will open to the public, with free admission during the soft launch period through March.

Greek Prime Minister Kiriakos Mitsotakis will officially inaugurate the museum some time before Orthodox Easter on 19th of April, it was announced at the press conference. The exhibition programme will also be announced then, but Culture Minister Lina Mendoni says that planning on the first temporary show is already underway. And a new museum director who will serve for a two-year term will soon be appointed by the culture ministry, while the international search for a more permanent director (which has not been without its own share of controversy and delays) will be taken up again this year, with candidates to be selected by a jury, Mendoni says. The museum will also hire an administrative and financial director.

Mendoni also announced that the museum’s operating budget would be increased to cover the hiring of new staff, the exhibition programme and even the purchases of new works, although she did not specify by how much. (Nikos Xydakis, the country’s culture minister until 2015, previously said the budget would have to increase from around €400,000 into the millions to allow the museum to open. The Greek government has so far spent €40m on the museum, with the Stavros Niarchos Foundation giving a further €3m in the final push towards completion.) And ownership of the Fix building is expected be transferred from the subway authority Attica Metro, which has owned the former brewery since the 1990s, to the museum foundation, with legislation due to be signed in the coming months by Mendoni and Transport Minister Costas Karamanlis. 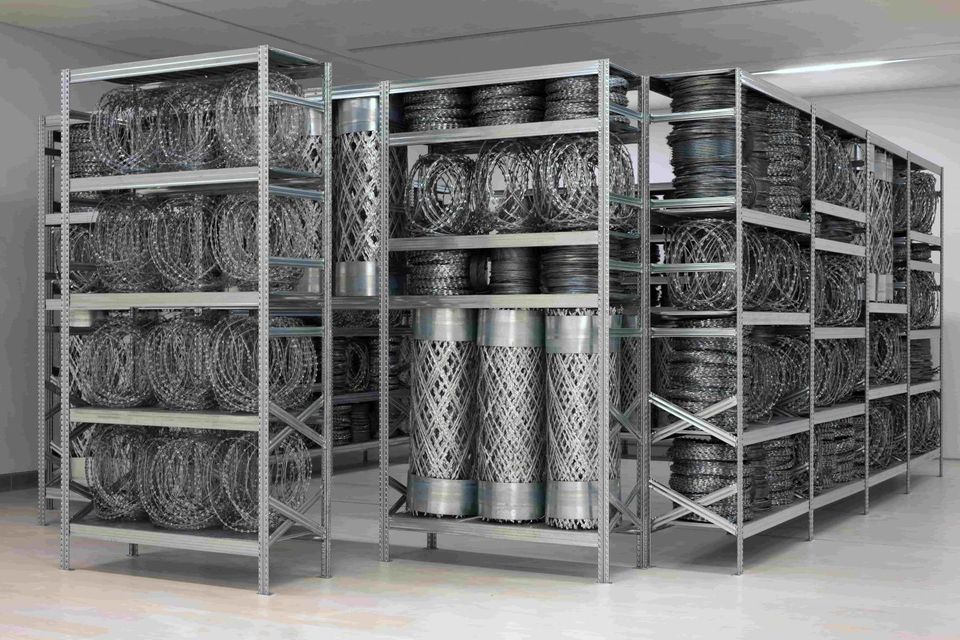 The opening display, drawn from the 1,300-strong permanent collection, includes 172 works by Greek and foreign artists. The exhibition opens on the second floor with Mona Hatoum's installation Fix it, made from old brewery equipment and tools—a reminder of the industrial history of the museum building. Equally emblematic is Kendell Geers's The Acropolis Redux (The Director's Cut) (2004), an installation of coiled barbed wire that reminds viewers of the danger and violence that dominates modern society.

In the following rooms, works by Greek artists from the 1960s and 70s, such as Nikos Kessanlis, the sculptor Theodoros, Chronis Botsoglou, and Dimosthenis Kokkinidis, many of whom devoted their practices to the country’s socio-political issues, are juxtaposed with works by international artists who comment on today’s political conditions. These include Emily Jacir’s embroidered tent Memorial to 418 Palestinian Villages Which Were Destroyed, Depopulated and Occupied by Israel in 1948, as well as Joana Hadjithomas and Khalil Joreige’s film Waiting for the Barbarians, and projects by younger Greek artists including George Lappas and Ilias Papailiakis. 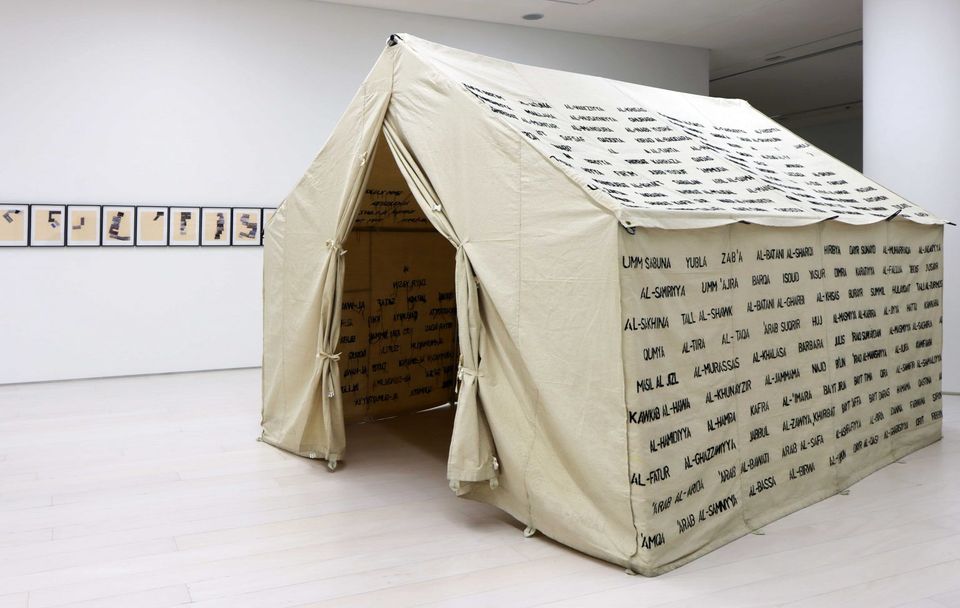 Emily Jacir’s embroidered tent Memorial to 418 Palestinian Villages Which Were Destroyed, Depopulated and Occupied by Israel in 1948 Photo: Eva Liapi

At the end of this floor is an interesting encounter between three works—a minimalist neon construction by Steven Antonakos, an untitled installation by Jannis Kounellis of intersecting steel beams guarding an “altar” of charcoal sacks, and 99 Names by Kutlug Ataman, a five-screen video piece showing a man praying—which create a conversation around spirituality.

The works on display on the third floor focus on boundaries, both physical and social. Here, visitors will see Gary Hill's video Wall Piece, Lucas Samaras's mirror installation Hebraic Embrace, as well as the poetic work of Athanasios Argianas The Length Of A Strand Of Your Hair, Of The Width Of Your Arms, Unfolded. Also on view are Pedro Cabrita Reis's acrylic on glass paintings The Black Monochrome, and works by Pantelis Xagoraris, Yorgos Lazongas, Costas Varotsos, Rena Papaspyrou, Yiannis Michas, and Michalis Katzourakis.

Work that delve into the interior, in search of the self and the psyche, emerge on the fourth floor. Visitors move from the harmonious cohabitation of Nina Papaconstantinou's ghostly Sylvia Plath: The Missing Journal and Janine Antoni's textile recording of her sleep with Slumber, to Chryssa's stark plaster reliefs in The Cycladic Books, and Nikos Alexiou’s delicately designed Little Tables.

And while the exhibition programme is still being worked on, temporary displays are already underway in the Project Room gallery, with Larissa Sansour's dystopian science fiction video In Vitro, which was first shown in the Danish pavilion at the 58th Venice Biennale in 2019. The two-channel Arabic-language installation, which will remain on view for a few months on the third floor, focuses on the ideas of memory and exile through a dialogue between two women scientists—a mother and her cloned daughter—meeting in a bunker below the devastated city of Bethlehem.