Exotic seasoning, but nothing too foreign: Rachel Corbett on the Triennial Bruges

The newly revived exhibition has some nice work on view, but is far better-behaved than its avant-garde past

The premier chocolatier in Bruges, Dominique Persoone, now sells snort-able chocolate, a cocoa powder laced with ginger or mint to give a cocaine-like jolt to the nostrils. Originally a tongue-in-cheek concoction served at a 2007 party for the Rolling Stones, the conceit proved so popular that soon he was selling his shooter devices by the tens of thousands at his shop The Chocolate Line.

There is a similar strategy at play when it comes to organising art biennials: events that spice up local ingredients with exotic seasonings, but none so foreign that they alienate regional palates entirely.

This was the case at the newly-resurrected Triennial Bruges, making its return to the medieval town after a 40-year hiatus. Bruges spends nearly 20% of its annual budget on the arts—twice as much as most other European cities—but its wealthy inhabitants have long favoured the Flemish Old Masters over contemporary art. These conservative tastes curtained the original triennial after its third edition in 1974, which included the vanguard conceptualism of the Belgian artists Panamarenko and Marcel Broodthaers. 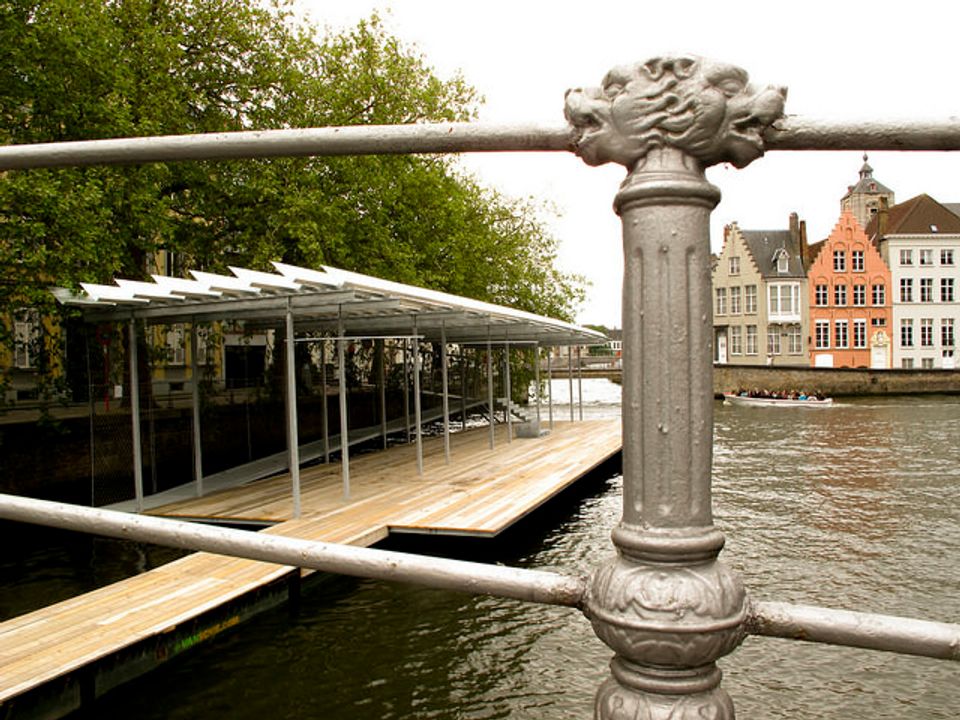 With this cautionary tale in mind, today’s curators took care to stir in just a few tangy sprinkles into an otherwise accessible recipe of public art. Take the Norwegian artist Vibeke Jensen’s octagonal, mirror-sided observation tower erected in stark modern contrast to the gothic centre market where it stands (1:1 Connect: DiamondScope, 2015). Housing a telescope, the structure offers a view of the iconic Belfry and brick plaza, which has been the site of public gawking since the beheading festivals of the Middle Ages.

Jensen invites visitors inside the tower to engage in “cultural exchange” with locals, although it seems more likely that the dialogue will be taking place on the outside, between tourists and their Instagram followers, as they discover how the mirrors also double as selfie canvases.

A touristic agenda is implied at most international biennials, but in the case of Bruges, the event marks a tectonic shift in cultural priorities. While mainstream marketing efforts such as the 2008 film In Bruges—which, yes, was a title pushed by city officials—drew visitors and their pocketbooks, the problem is actually that Bruges has too much money. “Young people can’t afford to stay here,” the city’s mayor, Renaat Landuyt, told me during a walking tour of a sound installation by the artist duo Bruce Odland and Sam Auinger. The pair recorded and amplified Bruges's white noise (Quiet Is the New Loud, 2015), which, for a town that's asleep by 10 o'clock, is about as sonically dramatic as someone gently chewing iceberg lettuce. 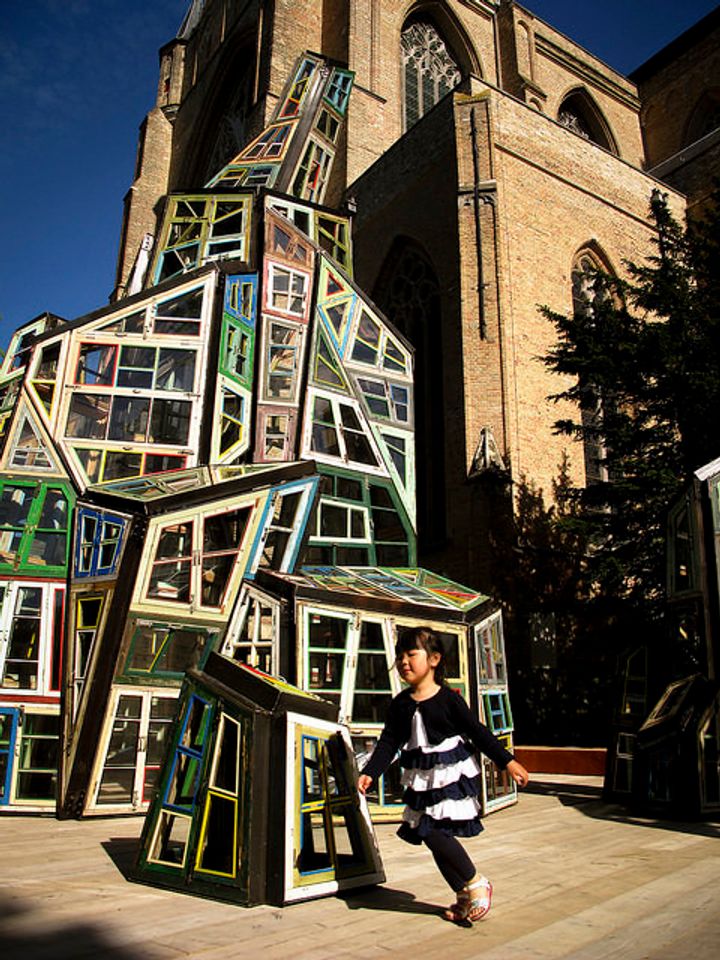 In a risky first-term move for the socialist mayor, Landuyt is gambling that contemporary art will draw young blood to the city (never mind that the average age of the triennial artist is 54). But he is hedging this $3m bet with a number of non-disruptive, tourist-friendly commissions that welcome the public to see itself as a kind of co-producer of the art. Among the 14 outdoor works on view, the Japanese architecture firm Atelier Bow-Wow built a public swimming dock on one of the city’s charming canals (Canal Swimmer's Club, 2015), while the local artist Daniël Dewaele set up a shipping container in front of the train station to interview tourists about their expectations of Bruges (The Passage Room, 2015).

Sometimes, one catches a whiff of scepticism when art feels forced to do something, to perform like a well-trained circus poodle. While there is nothing wrong with work that entertains or plays, at a certain point one could get a sense that organisers have lost faith that art alone is enough. But the triennial’s curators, Till-Holger Borchert and Michel Dewilde, pre-empted this criticism by making tourism, and art’s production of place, their explicit curatorial premise: what would happen if the five million people who visit each year decided to stay, turning the moldering old town into a megalopolis overnight? 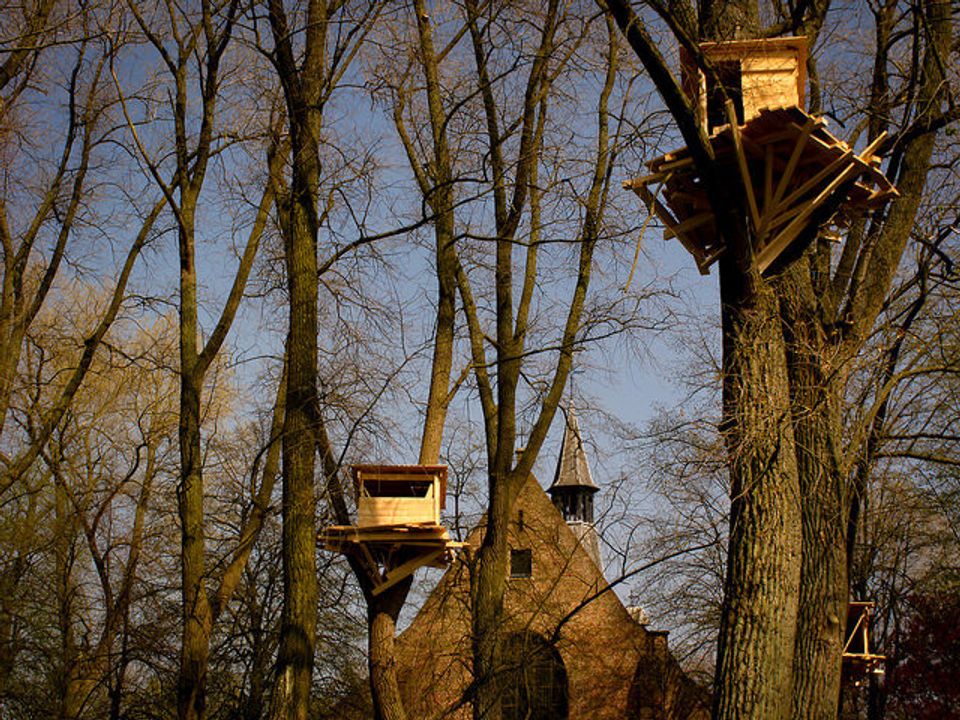 Perhaps it would look more like China, the Beijing-based artist Song Dong posits. Standing before the immutable grandiosity of the 10th-century St. Salvator’s Cathedral, Song built a kind of counter-monument to transience: a “cathedral” patched together entirely out of windows from demolished Chinese buildings (Wu Wei Er Wei [Doing Nothing Doing], 2015). Or perhaps populations would rise into the trees and live in child-sized huts like those that the Japanese artist Tadashi Kawamata perched throughout a poplar grove (Tree Huts in Bruges, 2015).

Other artists looked backwards, mining Bruges’s rich history—and the history of its riches—as the birthplace of capitalism. Down the street from the world’s first stock exchange, the intensely imaginative Austrian artist Rainer Ganahl replicated that historic building, known as the House of Beurze, out of more than 1,000 pounds of solid Belgian chocolate (Uber Capitalism, 2015). The sculpture's title is spelled out on a slowly rotating axle on top—a double reference to Nietzsche's Ubermensch and the taxi app Uber, a modern-day master of service capitalism. You can lick it, take a bite or, go ahead, crush some up and snort it. But fair warning: inhaling chocolate turns to be just as bad as it sounds.

That said, it takes time to perfect a recipe. I have faith that the land of chocolate's curators will get it right in the next three years. They have done it before.

Rachel Corbett is a contributor to The Art Newspaper.