Faking Hitler: the story behind a sinister market

Despite the failure of five of the dictator-to-be’s watercolours to sell at auction last month, a market for his works—both real and forged—remains 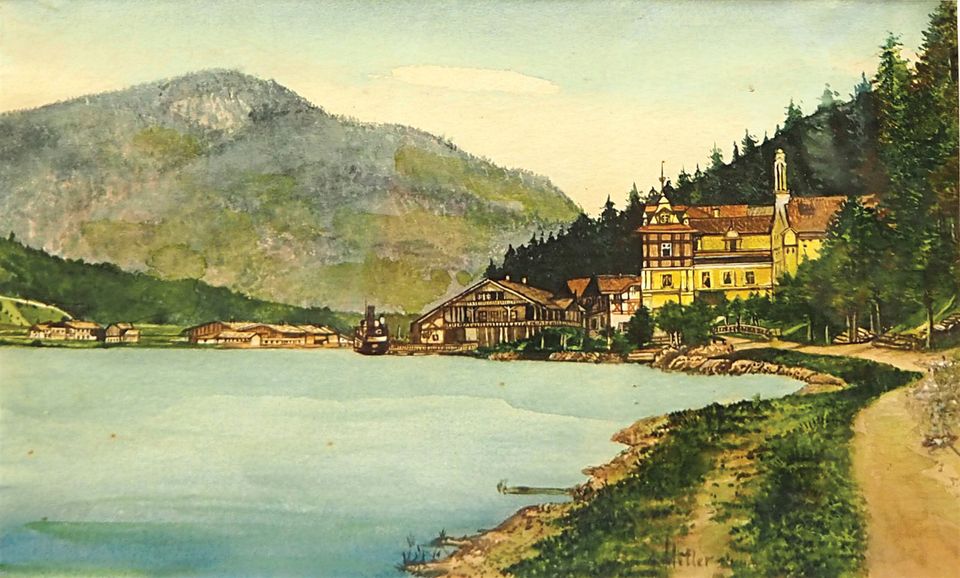 Village by a Mountain Lake, signed A. Hitler, was not among the works seized from Weidler as suspected forgeries. It is still seeking a buyer. Auktionhaus Weidler

Family-owned Auktionshaus Weidler perches on a cobbled street that winds uphill to Albrecht Dürer’s home and the medieval castle of Nuremberg. In the basement auction room, crammed with a haphazard assortment of chandeliers, paintings, furniture, clocks and silver, Kathrin Weidler called out bids in rapid fire on a Saturday in February.

The lots on offer were mostly humdrum furnishings cleared from the homes of the dead: lamps, carpets and oil paintings in varying conditions, unwanted by the heirs. Some sold for as little as €20 apiece.

It was almost a routine auction. But two days earlier, on 7 February, law enforcers had seized 63 paintings and drawings attributed to Adolf Hitler from Auktionshaus Weidler on suspicion they were forgeries. Twenty-six of those works had been destined for the Saturday auction.

Five further works were still on offer in Weidler’s Adolf Hitler Special Auction, led by Village by a Mountain Lake, a watercolour signed A. Hitler. With a low estimate of €45,000, it was by far the most expensive item in the three-day sale. A handful of journalists watched as the few customers kept their paddles low. The silence continued as four more watercolours, all signed A. Hitler, failed to sell.

A telephone bidder—a German man, according to the auction house—paid €5,500 for a Meissen vase that was allegedly seized from Hitler’s private rooms in the Reich Chancellery in 1945. But a table cloth and a wicker chair featuring swastikas—given by Hitler to his vet Karl Reimann, according to the catalogue—went unsold.

Major auction houses shun this dark corner of the art market. “The circle of buyers is a very special one that Ketterer Kunst doesn’t serve,” says Robert Ketterer, the owner of one of Germany’s biggest auction houses.

But Auktionshaus Weidler is not alone in developing this niche. Mullocks Auctioneers, based in Church Stretton in Shropshire in the UK, has previously sold dozens of such watercolours and oil paintings; in 2017, for instance, a watercolour village street scene sold for ₤3,800. A butterfly painting attributed to Hitler, with a guide price of between ₤8,000 and ₤10,000, failed to sell at auction on 23 February, according to Ben Jones, who manages customer relations at Mullocks.

“We have never had a complaint about the items we have sold,” Jones says. “All the information we receive from the vendor is passed on to the purchaser.”

In 2014, Auktionshaus Weidler sold a Hitler watercolour for €130,000 to a private buyer from the Middle East, seemingly encouraging other consignors to approach the auction house—the 31 works in February’s auction (including the 26 seized by police) came from 20 different sources. Of the five that were finally offered for sale, three came from the same Austrian consignor, according to Kathrin Weidler’s sister Kerstin, also an auctioneer.

Kerstin Weidler says bidders for works attributed to Hitler are “not right-wing extremists” but “people who want to own a piece of world history or make a financial investment”. But however unsavoury profiting from Hitler’s art may be, it is legal, even in Germany, where Nazi symbols such as swastikas are prohibited. Knowingly selling forged art is, by contrast, of course illegal. The seizure at Auktionshaus Weidler was the second in Germany in a month: on 24 January, Berlin police seized three watercolours from Auktionshaus Kloss on suspicion that they were forged. The auction house insisted that the paintings, signed A. Hitler, were produced by the dictator-to-be in 1910 and 1911.

Forging Hitler’s art is a time-honoured tradition. After his second rejection from the Vienna Academy of Fine Arts in 1908, Hitler eked out a marginal existence painting watercolours, mainly postcard-sized city views of Vienna. His agent Reinhold Hanisch sold them, and the income was good enough to allow Hitler to move out of a homeless shelter and into a new boarding house with Hanisch. The art historian Birgit Schwarz describes Hanisch as “a shady figure and notorious liar” in her book Geniewahn: Hitler und die Kunst (The Craze for Genius: Hitler and Art).

By the time Hitler seized power, the market was flooded with forgeries of his work, Schwarz says. Among the fraudsters was Hanisch, who “oversaw a veritable forgery centre in Vienna,” she says. He was arrested in November 1936 and died of a heart attack while in custody in 1937.

Hitler tried to clamp down on the market in forgeries by ordering the Nazi Party’s central archive in Munich to track down and buy both the genuine and forged works. He planned to authenticate the real ones to be entered into a catalogue raisonné, while the fakes would be destroyed. “But often he didn’t know whether they were genuine or not himself,” Schwarz says. “He had no distinctive artistic style. You can go into any number of antique shops in Vienna today and find paintings by other artists from the same era which look very similar in style.” Hitler banned publication of his art in 1937. Since then, there has been no scholarly attempt to fully catalogue it, Schwarz says: “It would be impossible to go about this seriously.”

In Nuremberg, Kerstin Weidler showed journalists a copy of Billy Price’s 1983 discredited “catalogue raisonné” of Hitler’s works. Titled Adolf Hitler: The Unknown Artist, it includes the five the auction house offered. Price was a collector who owned a large number of works attributed to Hitler. His book is dedicated to August Priesack, whose signature is on the “certificate of authenticity” that Weidler provided for Village by a Mountain Lake. But Priesack cannot be considered reliable—he was the first historian to authenticate the infamous “Hitler diaries”, unveiled as forgeries in 1983.

Schwarz describes Price’s book as “catastrophic”—more than 30 years ago, the historian Hermann Weiss identified several of the works included as fakes by Konrad Kujau, who was imprisoned as the forger of the Hitler diaries. Both Schwarz and Stephan Klingen, an art historian at the Central Institute for Art History in Munich, have been consulted by the police in recent weeks.

“No one has really conducted any serious comprehensive research into Hitler’s art,” says Klingen. “The amateurish work that has been done so far is by those who are making money from the market. It’s good the police are getting involved. Perhaps that way the market will dry up.”

But it may be difficult for prosecutors to press charges. Antje Gabriels-Gorsolke, a spokeswoman for the Nuremberg-Fürth prosecutor’s office, says it is not enough to prove the works are forgeries; police must find evidence against individuals who knowingly introduced forgeries into the market.

Given the vintage of some fake Hitlers, it is quite possible that the original scam merchants are all long dead.