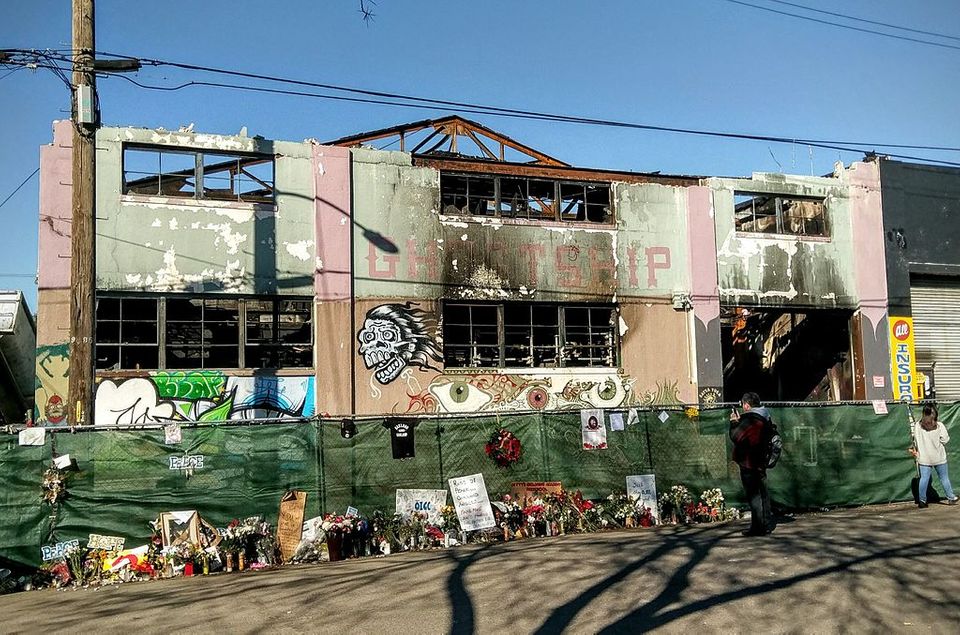 The Ghost Ship warehouse in Oakland, California, where 36 died in a fire in December 2016. Jim Heaphy, via Creative Commons

Families have expressed frustration over a jury’s acquittal of one man and its failure to reach a verdict on the culpability of another in a 2016 fire that killed 36 people in an artists' compound known as the Ghost Ship in Oakland, California.

“Everyone should be held accountable,” Mary Vega, the mother of victim Alex Vega, told The San Francisco Chronicle. “I lost my son because of this, and this is what happens? I am not happy about it.”

On 2 December 2016, about 100 people were packed into the second floor of the Ghost Ship for an electronic music concert when the fire broke out. It spread quickly through the 10,000-sq.ft space, engulfing wooden furniture, art, pianos and other items that packed the structure and fed the flames while creating a maze-like interior that was difficult to navigate.

There were two stairways leading down from the second floor, but one was behind the stage and the other was constructed from stacked wooden pallets, neither of them leading directly to an exit. The warehouse lacked sprinklers or smoke alarms.

Although a fire station was less than two blocks away and firefighters reached the scene within minutes of the first 911 call, the building was rapidly consumed while 36 people perished inside. It took five hours for firefighters to control the blaze.

Six months after the fire, Harris and Almena were charged with manslaughter. It seemed as though the case might not go to trial when the two agreed last August to a plea deal under which Almena would be sentenced to nine years behind bars and Harris to six. Alameda County Superior Court Judge James Cramer ultimately rejected the deal after reviewing case files that included a letter that Almena wrote portraying himself as a victim.

During the trial, the prosecution painted the defendants as knowingly negligent and dismissive of safety concerns, while the defense, led by Tony Serra (the brother of the sculptor Richard Serra) tried to deflect blame, first to the building’s landlord and city officials and then suggesting that arsonists were responsible.

Last month, jury deliberations were halted and three jurors were dismissed due to inappropriate contact with the media, according to the judge. Deliberations later resumed.

After the verdict, Harris was released from Santa Rita Jail in Dublin, California. The jury was split 10 to 2 in favour of convicting Almena, who remains locked up and will return to court on 4 October to see a date set for his new trial.

Meanwhile, the families of the victims were denied a sense of closure upon hearing the verdict.

Priced out of safe spaces

In the wake of the tragedy, the failure of municipal officials to inspect and enforce code violations became apparent. Neither the Planning and Building Department nor the Fire Department of Oakland had inspected the warehouse in 30 years. Although around 20 people lived there, the building was not zoned for residential use.

Almena was said to have instructed residents to tell people who asked that it was only a 24-hour art studio, not a living space. The cause of the fire was never determined, but a faulty electrical system is widely suspected.

Harris said after the fire that he had reached out to the building’s landlord, Chor Ng, to fix the overloaded system but that “they made no attempt to make it right”. Ng has not been brought up on any criminal charges, but is being sued in civil court by the victims’ families.

The fire also highlights the pressures that Oakland, like many cities across the country, is facing as rising real estate prices and creeping gentrification squeeze out artists and other low-income residents. As more and more people get priced out of residential neighbourhoods, they find refuge in buildings with questionable safety standards. Tenants are less likely to reach out for help in addressing safety issues if they think it could lead to them being evicted.

After the Ghost Ship fire, there was a wave of crackdowns on DIY artists’ spaces as cities sought to prevent a similar blaze.

The Oakland-based nonprofit Safer DIY Spaces meanwhile was founded to help grass-roots arts collectives with renovations and improvements to ensure that they are safe and have the proper permits. “There are some people in the Oakland government who have done a tremendous amount of work to try to solve the real problem: How do we make spaces like this safe so people don’t die in fires?” says David Keenan, the organisation’s executive director. “They understand the need to keep people housed rather than just replacing them with condos. Then there’s other folks, some really powerful folks who see artists as a liability, full stop. To their mind, it’s like, ‘Artists’ spaces are more likely to burst into flames and make me look bad, so let’s close those.’”

Keenan says he doubts that Thursday’s outcome will have much of a ripple effect on other artists’ spaces and expects the civil trial to be much more important. In addition to the landlord of the warehouse, the utility company PG&E (Pacific Gas and Electric) and the city of Oakland are named as defendants in that suit.

“The building officials, the fire marshal, people like that, are deeply concerned about the city’s liability,” Keenan says. “In a civil trial, that’s front and center. If it comes out that the city is culpable, then we’ll see a massive impact.’’

“Maybe what would happen is people will realise our system is kind of broke, and we’ll fix it,” he adds. “It will depend on who is in charge when that verdict rolls down.”