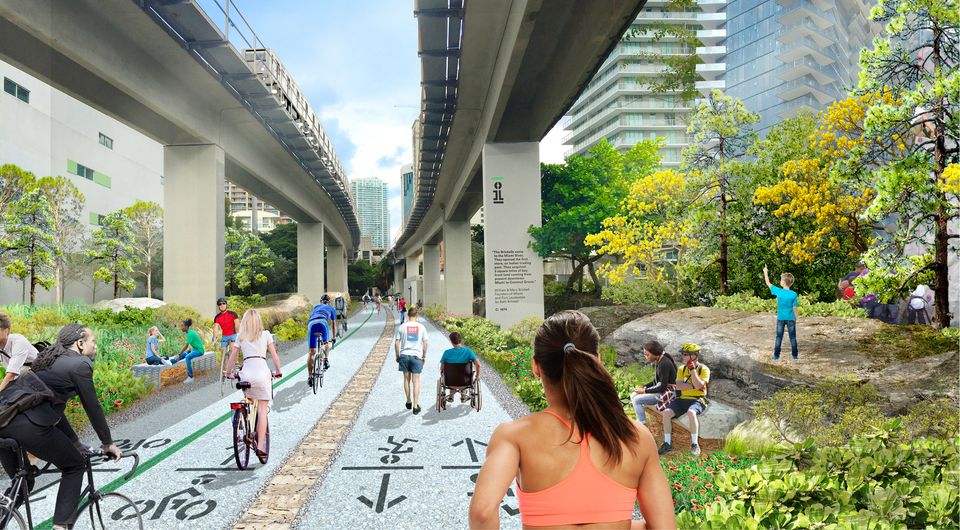 Public art will be a key feature of the Underline, which will run under the Miami Metrorail connecting Brickell and Dadeland Photo courtesy of The Underline

The first section of Miami’s own version of New York’s High Line, called the Underline, is due to open next summer. Construction on the first half-mile of the ten-mile $100m urban park and public art space is currently under way; the transformation of the tract of land under the Miami Metrorail that connects Brickell and Dadeland into a public recreation area is due to be completed in 2024.

The idea for the project came in 2013 when Miami resident and Friends of the Underline founder Meg Daly was forced to navigate the city on foot after breaking both arms. In search of shade, she walked through the barren alleyway under the tracks and was struck with an idea. “We have a beautiful space,” Daly says of the park she imagines coming to fruition, “but what makes it a place is the programming and the art.”

Around $5m is needed to support the Underline’s public art programme, which will be led by Ximena Caminos, the former artistic director of Miami Beach’s Faena Forum. Roughly $1m has been secured; the Knight Foundation has contributed a $500,000 matching grant and Miami-Dade County’s Art in Public Places programme will offer funding, which will be triggered by future development at Metrorail stations along the Underline.

Private funding will support curated and open call commissions while public money will be used for projects proposed through an open call. The first permanent work has already been commissioned from Cara Despain, who will create two glow-in-the-dark ping-pong tables from sea glass terrazzo. The work’s title, Water Table, alludes to sea-level rise. “Public space is disappearing,” Despain says. “In Miami, there’s a lot of private land ownership and the geography is really changing” due to global warming.