Florence Baptistery hauls down the scaffolding in time for Papal visit

Florence is pulling out all the stops for the impending arrival of Pope Francis. The scaffolding around the Baptistery of San Giovanni came down on Saturday (24 October) after a 21-month project—the first in 70 years—to conserve its eight polychrome marble outer walls against the effects of air and water pollution. The pope will walk through the Baptistery on his way to the Duomo, the cathedral of Santa Maria del Fiore, to address the fifth national ecclesiastical conference of the Italian Church on 10 November.

The €2m restoration was financed by the Opera di Santa Maria del Fiore, which has managed the Duomo and the surrounding monuments since construction on the cathedral first began in 1296. The organisation raised €200,000 through an ‘Abbraccia il Battistero’ (hug the Baptistery) crowdfunding campaign earlier this year. 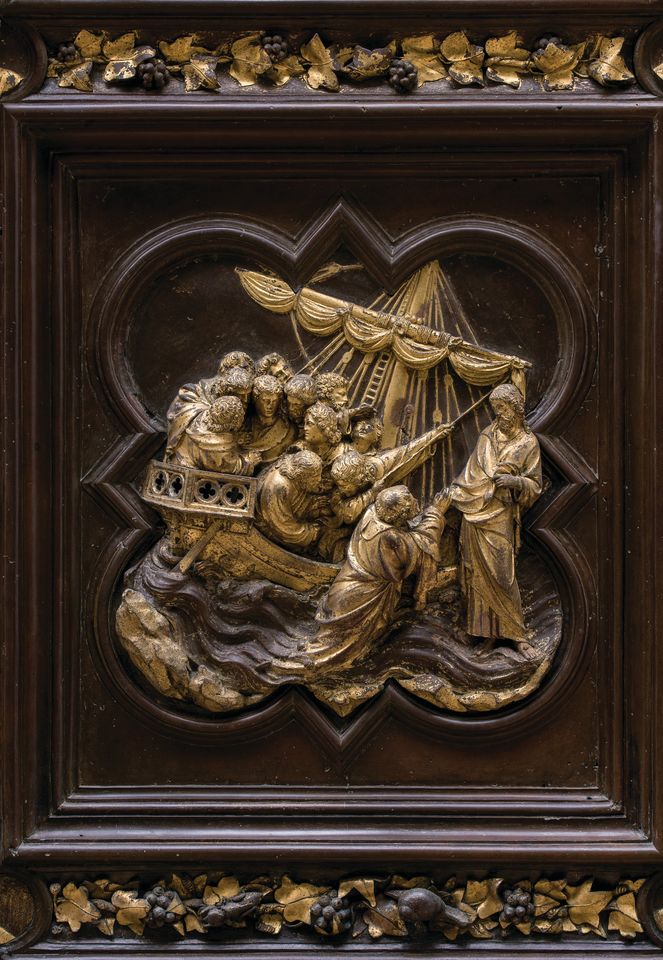 Gilded relief showing Jesus walking on water on the north door of the Baptistery of San Giovanni in Florence. Photo: Antonio Quattrone

The Opera has also completed the first restoration in six centuries of the Baptistery’s original north door, created by Lorenzo Ghiberti and his workshop between 1403 and 1424. Florence’s Opificio delle Pietre Dure cleaned the 28-panel double doors, revealing the contrast between the bronze ground and the gilded reliefs of scenes from the New Testament. They will be unveiled at the Museo dell’Opera del Duomo—which reopens after a €45m renovation on 29 October—alongside Ghiberti’s second Baptistery door, the Gates of Paradise (1425-52), with its ten entirely gilded Old Testament panels.

Meanwhile, 19th and 20th-century religious art is on show at Palazzo Strozzi in Divine Beauty from Van Gogh to Chagall and Fontana, an exhibition co-organised with the archdiocese of Florence and Vatican Museums in time for the ecclesiastical conference (until 24 January). The archdiocese is also presenting contemporary works by artists including Yves Klein, Nan Goldin and Mark Wallinger in a show at the Basilica of San Lorenzo, He Became Flesh: Contemporary Art and the Sacred (until 9 January).