Work on Mark Napier’s 2002 piece net.flag was recently completed by the Guggenheim 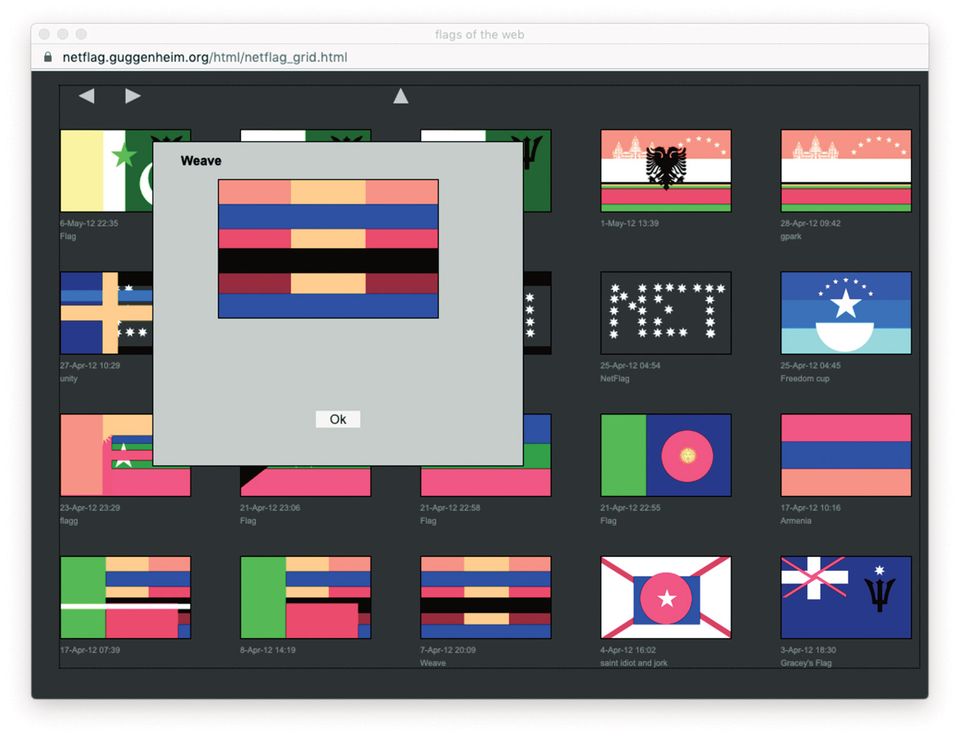 Mark Napier’s net.flag (2002) turns the visual language of national flags into a tool for personal expression Courtesy of the Solomon R. Guggenheim Foundation

A lot has changed online since 2002. On the one hand, this is cause for celebration: gone are the days of dial-up modems, painfully slow downloads and low-definition graphics. But as the internet hurtles into the future, what happens to the online art of bygone days? Sites and apps created with now obsolete programmes go through what is known as “digital decay”. For early internet art, that means conservation is desperately needed to prevent permanent loss.

The Solomon R. Guggenheim Museum in New York has three such “net works”. Since 2014, the museum’s conservation team has been partnering with the Department of Computer Science at New York University (NYU), inviting its students to help analyse and preserve its computer- based art. Net works dating from 1998-99 and 2002 were conserved in 2017-18, while work on the final one—Mark Napier’s net.flag (2002)—began in March 2019 and was recently completed.

Jon Ippolito, who was a curator at the Guggenheim in the early 2000s, described net.flag as “an emblem for the internet as a new territory, one composed of people from various geographical regions and ideologies”. The idea was to allow online users to create their own digital flags based on the colours and insignia of real national flags. The original piece included around 60% of the countries the United Nations recognised in 2002. Napier and his assistants downloaded and analysed each flag to create the correct colours and proportions, and included written descriptions of the meanings attributed to each element. People could browse through past creations, as well as save and share their own work.

The basis of net.flag was Java applets, a technology used to make interactive applications that is no longer supported by today’s internet browsers. NYU students conducted research in collaboration with Napier and the Guggenheim’s curators before embarking on an analysis of the code. Deena Engels, a clinical professor of computer science at NYU, and the computer scientist Emma Dickson oversaw the transfer of the work to the current programming language Javascript.

One of the complexities of digital conservation is preserving a work’s original character while accepting that it must move forward to survive, says Lena Stringari, the deputy director and chief conservator at the Solomon R. Guggenheim Foundation. “This is a delicate balance,” she adds. While net.flag’s code was restored in a similar “style” and the work’s essence was retained, some aspects have changed.

Napier wanted the full list of countries to be included in the restored version—including recently recognised states such as South Sudan—as that had always been his intention although time constraints had prevented it. “It would have been awkward to put out a piece that is about international flags and not include them all—it would immediately imply favouritism or colonialism or something,” Napier says. Other changes included smoothing the jagged edges of shapes in the old computer renderings and adding non-Latin character sets, including Arabic and Chinese, for the texts.

Stringari says that digital conservators forage beyond their relatively small field for strategies: “We refer to various industries, software engineers, archival preservation protocols, emulation models and many other areas that can inform what we do as conservators.” All works based on code and current technologies will require frequent monitoring and migration, she adds.

Having conserved many of the works on his website, Napier knows that net art needs constant attention. “Nothing lives forever, so it’s a question of how long it is relevant,” he says. “Paintings are conserved because they matter to people in the present day. I hoped that net.flag would last as long as it was relevant, and I think it still is today with the political climate we’re in. The piece still speaks to the internet as a place of tribal warfare for territories.”

A brush with... Michael Armitage

A brush with... Michael Armitage