Non-partisan platform For Freedoms has signed up over 200 institutions for the initiative, which aims to make art part of the public discourse 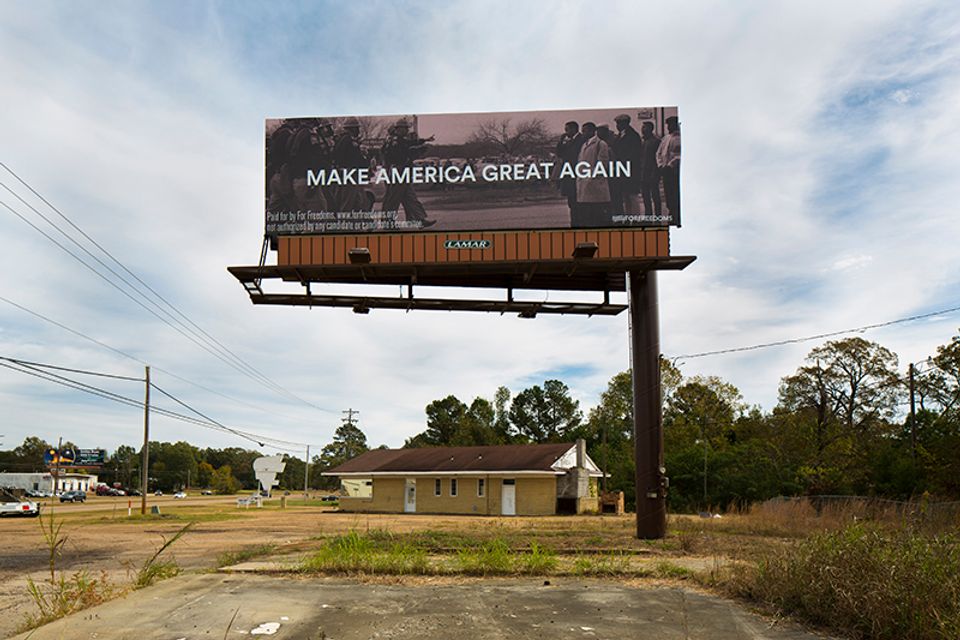 Fifty-two crowdfunding campaigns for a US-wide public art project that aims to bring together art and civic engagement are launching today (4 June). If successful, the non-partisan platform For Freedoms's Kickstarter campaigns—one for each state, the District of Columbia and Puerto Rico—will bring artist-designed billboards and civic-minded programming to partner institutions across the US. Led by the artists Hank Willis Thomas and Eric Gottesman, who founded For Freedoms in 2016, the 50 State Initiative is due to be held this autumn and timed to coincide with the November mid-term elections. The project is touted as potentially the largest ever public art project in the US.

Inspired by the grassroots campaigns of politicians like Bernie Sanders and Rand Paul, each of the crowdfunding projects, due to end on 3 July, has a $10 starting point for a goal of $3,000. “We’d rather get 300 people giving us $10 than two people giving us $3,000,” Thomas says.

“At the base of this [project] is a desire to increase the quality of civic conversations and inject art into public discourse,” Gottesman says. “The scale of it matches what our intentions are.” To date, over 200 museums, cultural organisations and places of learning have signed on, from the University of Alabama, Birmingham, to the Detroit Institute of Art and the Brooklyn Museum, and Thomas estimates that 300 to 500 artists will be involved.

Billboards by artists including Carrie Mae Weems, Trevor Paglen, Tania Bruguera, Marilyn Minter and Rashid Johnson, will go up in September. For Freedoms has previously installed billboards, which feature political but non-partisan messages, such as Paglen’s Protect Us From Our Metadata. Some are more provocative; a billboard reading “Make America Great Again” over a photograph snapped by a young Spider Martin on Bloody Sunday (7 March 1965) during the Selma to Montgomery march drew negative reactions when it was installed in Pearl, Mississippi. The 50 State Initiative will include both new and previously shown billboards.

Wouldn’t it be amazing to get all these artists, citizens, people invested in art as a fundamental part of our public discourse? Eric Gottesman

The community programming, due to run from September through December, includes exhibitions, artist projects, workshops and town halls. In an initiative led by the Fralin Museum of Art at the University of Virginia in Charlottesville, the Charlottesville Office of Human Rights and the Jefferson School African American Heritage Center, local artists will design posters and billboards to educate citizens about the history of slavery and ongoing racism in the city—the site of deadly clashes with white nationalists last August—and also hold public art-making sessions and conversations. Many of the 50 State Initiative events had already been planned by institutions before the launch of the project, but “we’re just corralling it into a national movement”, Gottesman says.

Thomas and Gottesman hope to continue the project, saying it can even be compared to a biennial in its relation to the election cycle. Though For Freedoms is running the 50 State Initiative as a 501(c)(3) (a tax-exempt non-profit), For Freedoms Federation, LLC, the platform was launched as a Super PAC (political action committee that can raise unlimited funds), and the artists plan to return to the For Freedom Super PAC in the 2020 presidential election. For now, incorporating as a 501(c)(3) LLC better serves the 50 State Initiative, Gottesman says, since “the veneer of politics” associated with a Super PAC—which are typically partisan, though For Freedoms is not—“was too much for some institutions to bring us in, even though they were interested from an art perspective”.

“I think the structures themselves have become one of our mediums,” Thomas says, “part of the creative process”. Is using these vehicles for their projects a work of art unto itself—does it have a performative aspect? “I think we’re constantly riding the line of not knowing what the answer to that question is,” Gottesman says. “We’re both sort of performing and appropriating populist political practices, like even the name, the 50 State Initiative… but we’re also sincere about it. Wouldn’t it be amazing to get all these artists, citizens, people invested in art as a fundamental part of our public discourse?”