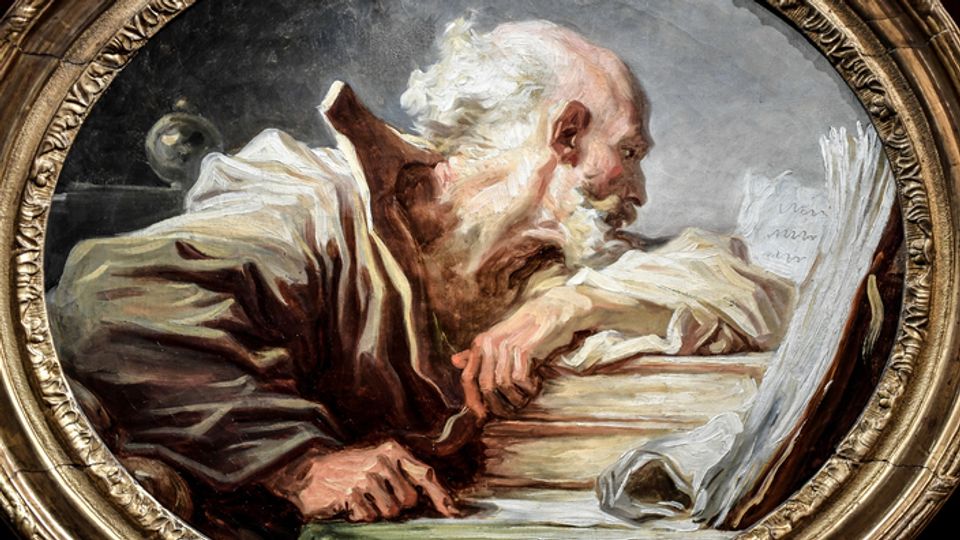 A painting by the 18th-century French Rococo master Jean-Honoré Fragonard—long considered "insignificant" by its owner—has sold at auction for £6.6m (with fees). Offered by the French auction house Encheres-Champagne in Épernay, Champagne, it made over three times its £1.7m high estimate.

Until recently Philosopher Reading, a small oval work depicting a wizened man pouring over a pile of books, hung high on a wall of a family's apartment in the Marne region, east of Paris. Handed down over generations, it was assumed by its owners to be relatively worthless. It was not until the Épernay-based auctioneer Antoine Petit conducted an inventory of the family's estate for inheritance purposes that the painting, covered in layers of dust and grime, was given proper examination.

Petit says the he immediately recognised "the obviously expert touch" and the "incredibly frank brushstrokes" of the artist. Experts confirmed the work was by Fragonard, identifying his faint signature on the reverse of the painting's gilded wooden frame. Stéphane Pinta, one the experts who authenticated the work, told AFP that Fragonard was aged around 40 when he painted it and that it appears to have been executed with the artist's trademark virtuosity and speed. "The paint seems to be moulded or sculpted, at times even applied directly with a finger. Freed from the extreme minutia of the Rococo style, his brush strokes are quick, precise and incredibly expressive," he said.

The sale on Saturday culminated in a three-way bidding war between two private collectors and a London dealer. Petit has declined to reveal who made the winning bid.

Philosopher Reading is now the third most expensive work by Fragonard to sell at auction. The artist's record stands at £17.1m achieved in 2013 at Bonham's London for one of his fantasy portraits, Portrait of François-Henri, 5th duc d'Harcourt. It was the most expensive Old Master painting sold at auction that year.