Corporation owned by Warren B. Kanders, whose links to tear gas led to his museum ouster, is selling off divisions associated with violent tactics 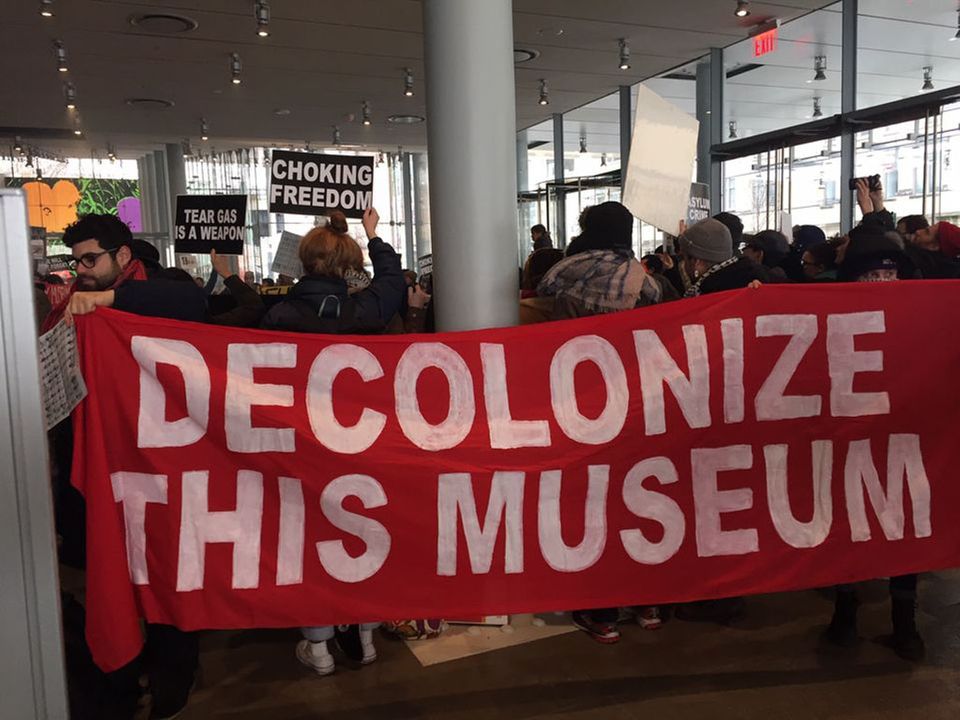 A protest at the Whitney Museum of American Art over Warren B. Kanders's business ties in December 2018

The corporation run by Warren B. Kanders, who resigned as vice chairman of the Whitney Museum of American Art over his business ties to violent means of suppressing crowds, announced today that it was divesting itself of business units devoted to such technologies.

The corporation, the Safariland Group, quoted Kanders, its chairman and chief executive, as saying that the divestiture of those divisions, which sell technology including chemical agents, munitions and batons, “removes the active component and allows Safariland to focus on passive defensive protection” for law enforcement and military agencies. That “passive” equipment includes body armour, bomb suits and safety holsters, he said.

Kanders resigned as vice chairman of the Whitney in July 2019 after months of protests over his company’s sale of tear gas canisters that were reportedly used against asylum seekers at the US-Mexico border. Hundreds of artists, critics and activists as well as dozens of Whitney employees expressed outrage over his links to such weapons.

The divestiture was first reported today by The New York Times. The newspaper noted that the corporate decision came as Kanders and Safariland were again drawing criticism because tear gas manufactured by a division of the company has been used by law enforcement agencies against US demonstrators protesting police brutality and racial injustice after the death of George Floyd in Minneapolis.

In the company's statement, Kanders expressed support for the work of law enforcement in general and did not mention the clashes that have flared between police and some protesters since the recent protests began. “As we look to the future, Safariland will continue to support public safety professionals in all lines of service as they risk their lives daily to keep the public safe,” he said. “First responders—including police, fire, EMT, domestic abuse, and drug and addiction intervention counselors—take immeasurable risk each day when they report to work. Safariland will always support them.”

The Jacksonville, Florida-based company said that the sale of the business divisions marketing aggressive technology, Defense Technology and Monadnock, would be completed in the third quarter of this year, subject to regulatory approval, and that the units’ current management would become the new owners of the business. The terms of the sale were not disclosed, and it was unclear what Kanders might reap as chairman, chief executive and majority owner of Safariland. According to Dun & Bradstreet, the corporation posts nearly $884m in annual revenue.

Kanders, who joined the Whitney board in 2006 and has donated millions to the museum, resigned as a trustee among with his wife, Allison, who gave up her post as co-chairwoman of the Whitney’s painting and sculpture committee. His ouster followed weeks of protests at the Whitney by the activist group Decolonize This Place highlighting the sales of tear gas and munitions by Safariland, and a separate request by eight artists for their works to be withdrawn from the Whitney Biennial because of Kanders’s activities. (The artists rescinded their request after his resignation.)

“Unfortunately,” Kanders wrote in his resignation letter, “the targeted campaign of attacks against me and my company that have been waged these past several months has threatened to undermine the important work of the Whitney. I joined this board to help the museum prosper. I do not wish to play a role, however inadvertent, in its demise.”