François Hollande, the president of France, denounced the destruction of Syria’s cultural heritage in a speech at the Metropolitan Museum of Art Tuesday night. Standing at the Met’s Temple of Dendur in its Egyptian galleries on 20 September, Hollande also announced the formation of a $100m fund from private and public donors to combat terrorist attacks on cultural sites and “protect the resources of humanity.”

Besides appealing for sites to be protected, Hollande also called for a strengthened commitment to cultural preservation that might include “intervention”, for which he gave no details. Restoration of damaged sites would also be part of his new mission, he said. So would “asylum” for some endangered works of art, a curious term, given the resistance towards accepting Syrian refugees in Europe and the Gulf States.

Hollande also spoke about a conference on cultural threats in the region, to take place in Abu Dhabi on 2-3 December. 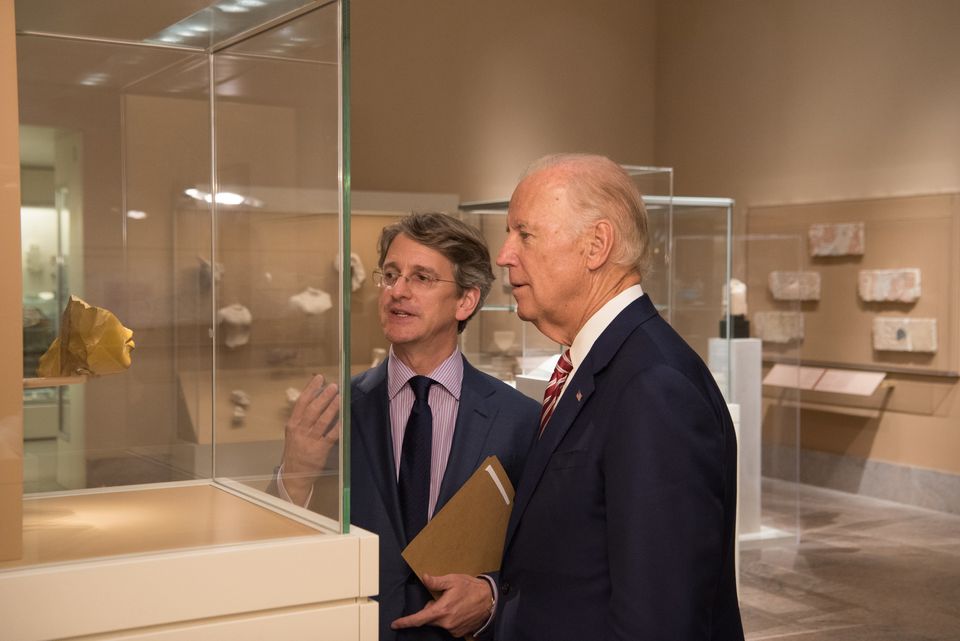 The French president was preceded by the US vice president Joseph Biden, who also condemned the targeting of cultural sites and the killings and persecution of cultural minorities by Isis or Daesh. Biden, in New York for the meeting of the General Assembly of the United Nations—as was Hollande—is the highest-level US official to address cultural losses in the six-year Syrian civil war. But he left the Met event without discussing specific strategies for protecting cultural sites.

Earlier in the evening, Knox Thames, the US State Department’s special advisor for religious minorities in the Near East and South/Central Asia, moderated a panel of specialists who stressed increased documentation of losses by cell phone cameras and other personal devices, and called for involving local populations in protecting cultural heritage. The Iraqi-born archaeologist Zainab Bahrani of Columbia University noted that groups bracketed in policy discussions as insulated minorities also saw ancient sites like Nimrud and Nineveh as part of their direct cultural ancestry.

The French mission to protect heritage will be led by Jack Lang, the director of the Institut du Monde Arabe, a political insider and a former French Minister of Culture. At the Met event, Lang referred questions to Benoit Paumier, a former official of the Ministry of Culture and the former director of Radio France Internationale. “This mission began a month ago,” Paumier noted.

While cultural destruction and pillaging have long been facts of war, he said, “the point of departure, which shocked the French population, was the destruction of Palmyra by the terrorists. At that point, the president of the republic asked the president of the Louvre, Jean-Luc Martinez, to prepare a report on how the international community could respond to preserve the cultural heritage of humanity.”

The report, he said, recommended the fund mentioned by Hollande, which Paumier called a “public-private partnership”. In his speech, Hollande referred to “donors and benefactors” of the Met in the audience, who Paumier hoped might support that fund.

In Abu Dhabi, he said, the mission would come under the umbrella of the Abu Dhabi Tourism and Culture Authority, a government agency.