Culture ministry blocked export of medieval work but will the French state proceed with purchase? 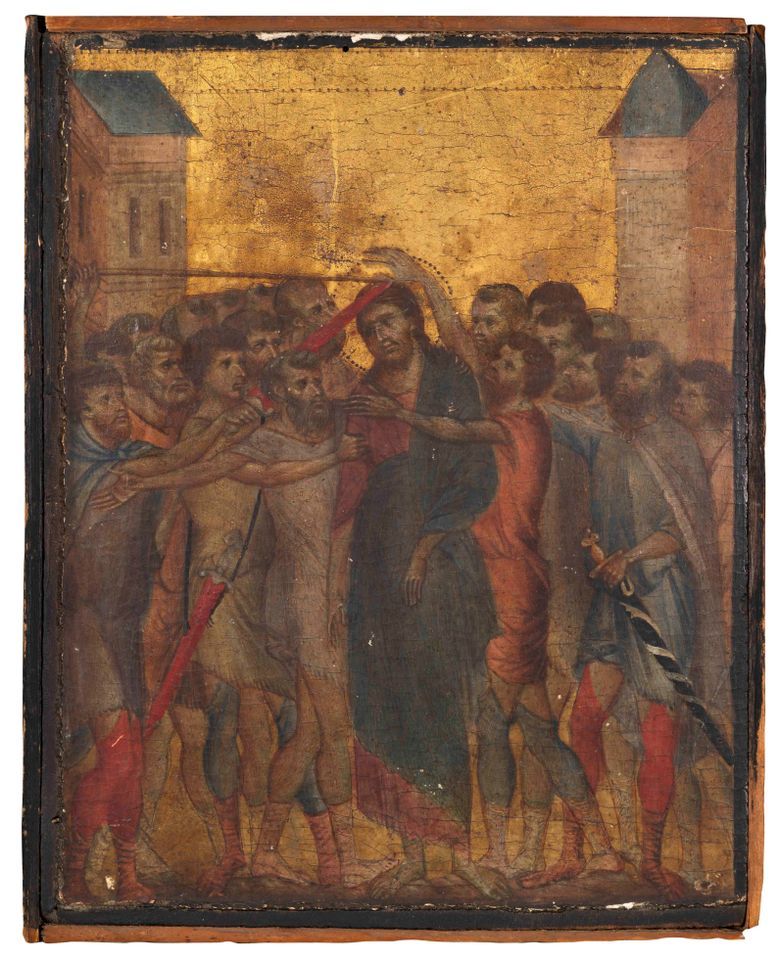 This small panel by the Florentine artist Cimabue was sold for €24.1m Courtesy of Actéon and Eric Turquin

France has blocked the export of the Cimabue painting, The Mocking of Christ (around 1280), which was auctioned for €24m (with fees) in Senlis, northern France, in late October. Deeming it to be a “national treasure”, the culture ministry has 30 months to raise the funds to acquire the rare, small-scale, wood panel painting that was found in a kitchen in the town of Compiègne in June.

Franck Riester, the culture minister, refused to grant the export certificate following the recommendation by Edmond Honorat, president of the national treasures advisory committee, according to a press release sent out yesterday. According to French law, the culture ministry has four months to refuse a request for an export certificate if it decides that it may wish to acquire a work for the French state.

“It's not a surprise; we knew that the culture ministry was interested and we didn't understand why it didn't pre-empt the sale,” Eric Turquin, the Paris-based expert who authenticated the painting, tells The Art Newspaper.

It is believed that the culture ministry, who sent a representative to the auction, had a budget for €15m and dropped out of the bidding once the figure went higher. “Obviously the ministry has found more money and is determined,” Turquin says.

The decision will be disappointing news for the likely buyer, the Alana Collection of Italian Renaissance paintings—formed by the US-based collectors Àlvaro Saieh and Ana Guzmán—and for the family of the seller. The elderly woman who owned the Cimabue died two days after the sale, bequeathing it to three heirs who will have to pay inheritance tax of around €9m.

“What worries me is the uncertainty as to whether the French state has the means to buy it,” Dominique Le Coënt de Beaulieu, the auctioneer of the sale, says. “On the one hand, the economy and finance ministry will ask the heirs to pay inheritance tax within six months of the owner's death and, on the other hand, the culture ministry can take its time [to decide whether to acquire the painting] and prevent payment for the work.” Turquin, however, says that a delay to pay inheritance tax should be accorded to the heirs: “Normally, things go well in this kind of case.”

Le Coënt de Beaulieu is also concerned that the culture ministry may decide against making the acquisition. He points to how, in 2016, it refused to issue an export certificate for the painting Judith and Holofernes, which Turquin attributed to Caravaggio, only to rule against acquiring it 30 months later following disagreement over its attribution.

In his statement, Riester said “all efforts will be mobilised so that this exceptional work comes to enrich the national collections”. The painting would be the second work by Cimabue, pseudonym of the Florentine painter Cenni di Pepo, Giotto's master, to belong to France, besides The Madonna and Child in Majesty Surrounded by Angels in the Louvre.

Referring to how it is believed to be part of a polyptych, along with The Virgin and Child With Two Angels in London's National Gallery and The Flagellation of Christ in New York's Frick Collection, Riester stated: “The Mocking of Christ [...] reveals, even more than the two other compositions [and] Cimabue's usage of a new, visual language. This evolution is notably visible in the humanist treatment of the figure of Jesus, the rendering of the characters' expressions or that of space.”