Pascal Convert's sculpture is a replica of the remains of the emperor’s horse Marengo, which was captured by the British at the Battle of Waterloo 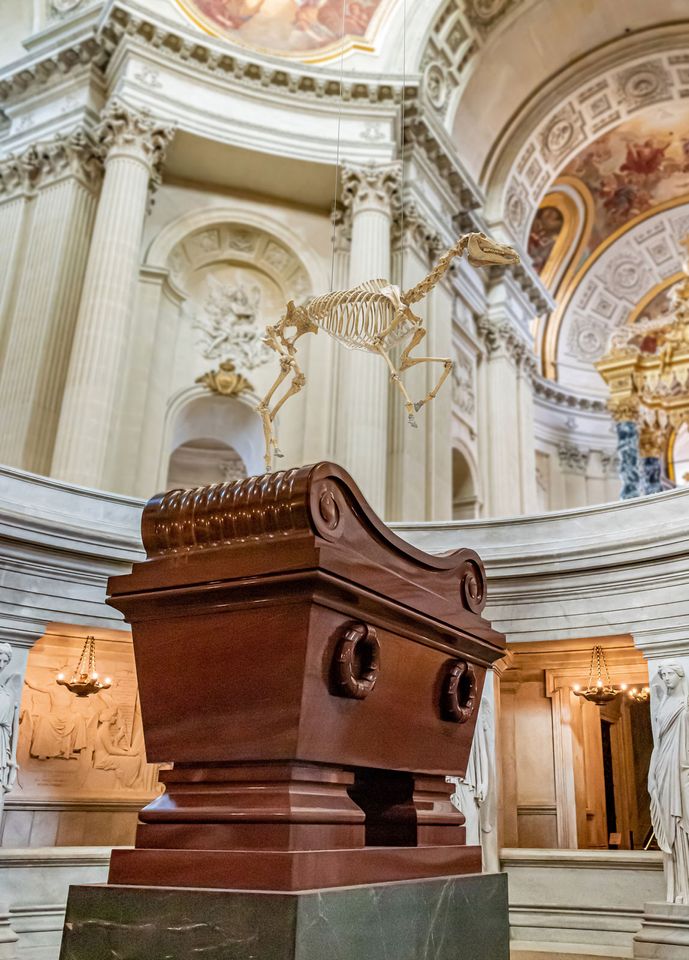 The French artist Pascal Convert has defended plans to install a replica skeleton of Napoleon Bonaparte’s horse above the military leader’s tomb in Paris after historians and commentators called the project “shocking”. The sculpture, Memento Marengo, is due to be displayed in the hallowed dome of the Invalides, a church housed at the Musée de l’Armée (7 May-31 January 2022).

Convert’s work is part of an exhibition, Napoleon? Encore!, organised by Eric de Chassey, the director of Paris’s Institut National d’Histoire de l’Art, which marks the bicentenary of the death of Napoleon. According to the museum website, “thirty contemporary artists [including Julian Schnabel and Marina Abramovic] received carte blanche to question this symbolic and historical figure”.

The historian Thierry Lentz wrote on Twitter that Convert’s plan to show the work depicting Napoleon’s horse, which was called Marengo, is “shocking… bringing Napoleon back to life by hanging a horse skeleton made of plastic above his tomb…. This must be a dream”. Pierre Branda, the head of heritage at the Napoleon Foundation, also tweeted that “we have fallen into a shocking grotesque [scenario]... Contemporary art is not an excuse for everything”.

Convert has responded to comments about his chosen material for the sculpture. “The term ‘plastic’ recurs like a leitmotif in the criticisms levelled at my work by the historian Thierry Lentz and his followers. Would the reaction have been any different had my sculpture been in gold? Might the work have then been more acceptable? Definitely not,” the artist says.

Convert tells The Art Newspaper that “any controversy is not caused by the material used for the sculpture but by the fact that my work penetrates the sacred circle of the Emperor’s tomb”. But the work also re-ignites the issue of slavery, he adds, stressing that France has a “troubled relationship” with its history.

“The bicentenary of Napoleon’s death is seeing the return of the old demons of a nation divided between his acolytes and his detractors, with the key issue this time probably being the re-establishment of slavery by Napoleon Bonaparte in 1802, which remains a stain on his triumphant rise to power. And on his fall from it,” Convert says.

Marengo was a purebred light grey Arab stallion named after Napoleon’s victory at the Battle of Marengo in Italy in 1800, according to the website of the National Army Museum. In June 1815, Marengo was captured on the battlefield after the Duke of Wellington defeated Napoleon at the Battle of Waterloo and taken to England. The horse’s skeleton was first displayed at the Royal United Services Institute and then moved to the National Army Museum in London in the 1960s.

“A simple loan by the museum was out of the question because of the fragility of the original skeleton and owing to British sensitivities concerning the relic, which is a symbol of their victory at Waterloo,” Convert says. He adds that carrying out this project has involved overcoming a number of obstacles. “Brexit and the pandemic have not helped, but thanks to some resourceful cooperation on both sides of the Channel, I was granted permission to make a high-definition 3D copy, as long as I guaranteed that this would be the only one ever made and that it would only be exhibited during the bicentenary commemoration,” he says.

The Musée de l’Armée did not respond to a request for comment.