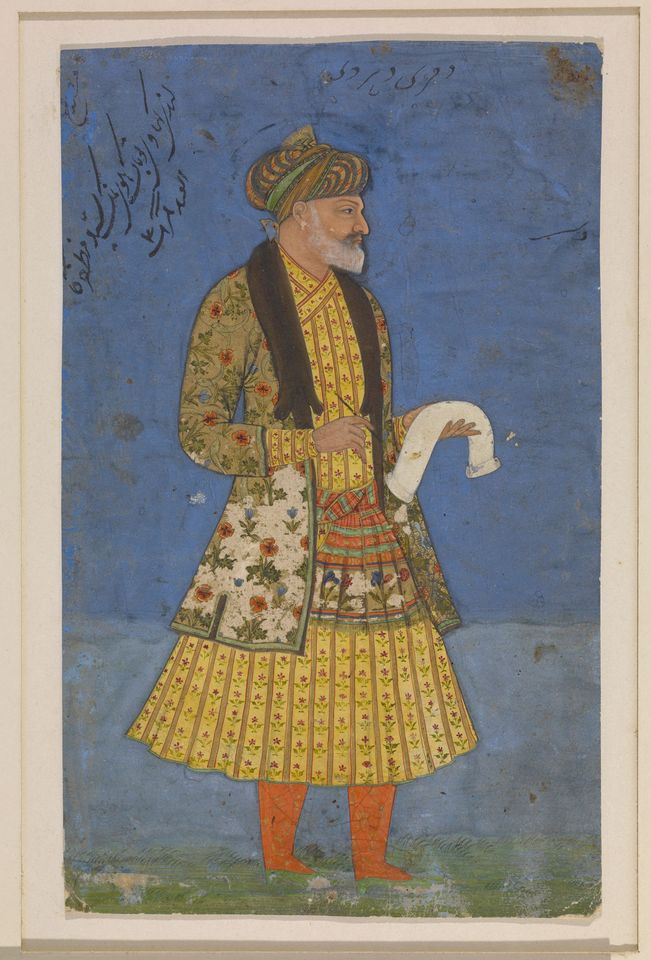 The identity of a nobleman depicted in an 18th-century Indian miniature painting at the Colby College Museum of Art in Waterville, Maine, was recently uncovered by a first-year student at the university, and corroborated by another graduating next spring. Previously known only as Man with a Flowered Coat, the sartorially stunning subject holding a scroll and writing implement has been identified as Sayyid Muzzafar, the commander-in-chief for the 17th-century sultan Abul Hasan. The student’s discovery now links the miniature painting, held by the university museum since 1959, to other portraits of Muzzafar hanging in the British Museum in London and the Rijksmuseum in Amsterdam.

This art historical puzzle was solved by freshman Matthew Brown during a first-year writing class called Art 101 Reading Images. “Students select a single piece from the Colby College Museum of Art and they work on this through the semester,” says Dr Marta Ameri, who teaches the course. “It starts with a visual analysis and culminates in a research paper where they try to find as much information as they can so as to make an argument about the work. The trick here is that most of these pieces had not been published or very well studied.”

The day before the papers were due, Ameri says, Brown told her he had made a discovery about the miniature Man with a Flowered Coat and asked for an extension. Brown says he was searching through similarly dated Mughal paintings when he found a portrait of Sultan Abul Hasan wearing a coat with a flower pattern that bore a striking resemblance to the painting at Colby College. “From this point in my search, I felt confident that these two paintings were connected in some way. I believed that it was possible that Man with a Flowered Coat could have been from the same area of Golconda, India. Due to the subject's apparent literacy and high fashion, it was safe to assume that he was part of the upper-class,” Brown adds.

“I began searching for people associated with Sultan Abul Hasan, and eventually I came across the Witsen Album, which is a collection of 49 portraits of rulers and other upper-class members of the Mughal empire, many of them originating from Golconda,” the student says. The album was featured on the Rijksmuseum’s website, and it included a portrait of a man named Sayyid Muzaffar who was described (in Dutch) as the sultan’s commander-in-chief.

A portrait of Sayyid Muzzafar from the Witsen Album at the Rijksmuseum, Amsterdam

“This portrait looked very similar to Man with a Flowered Coat—the two had a nearly identical face, and both carried a scroll,” Brown says. He corroborated his hunch by looking for other portraits of Sayyid Muzaffar, including paintings in the British Museum and the Bibliothèque Nationale de France.

“There are a number of portraits of Muzaffar in larger collections, and so Brown started to put it together and suddenly we had a name for this man,” Ameri says. “This discovery links the works in small collections like ours to a larger dialogue across art history. It also speaks to the value of collections and exhibitions of small museums and their ability to push forward these dialogues.” 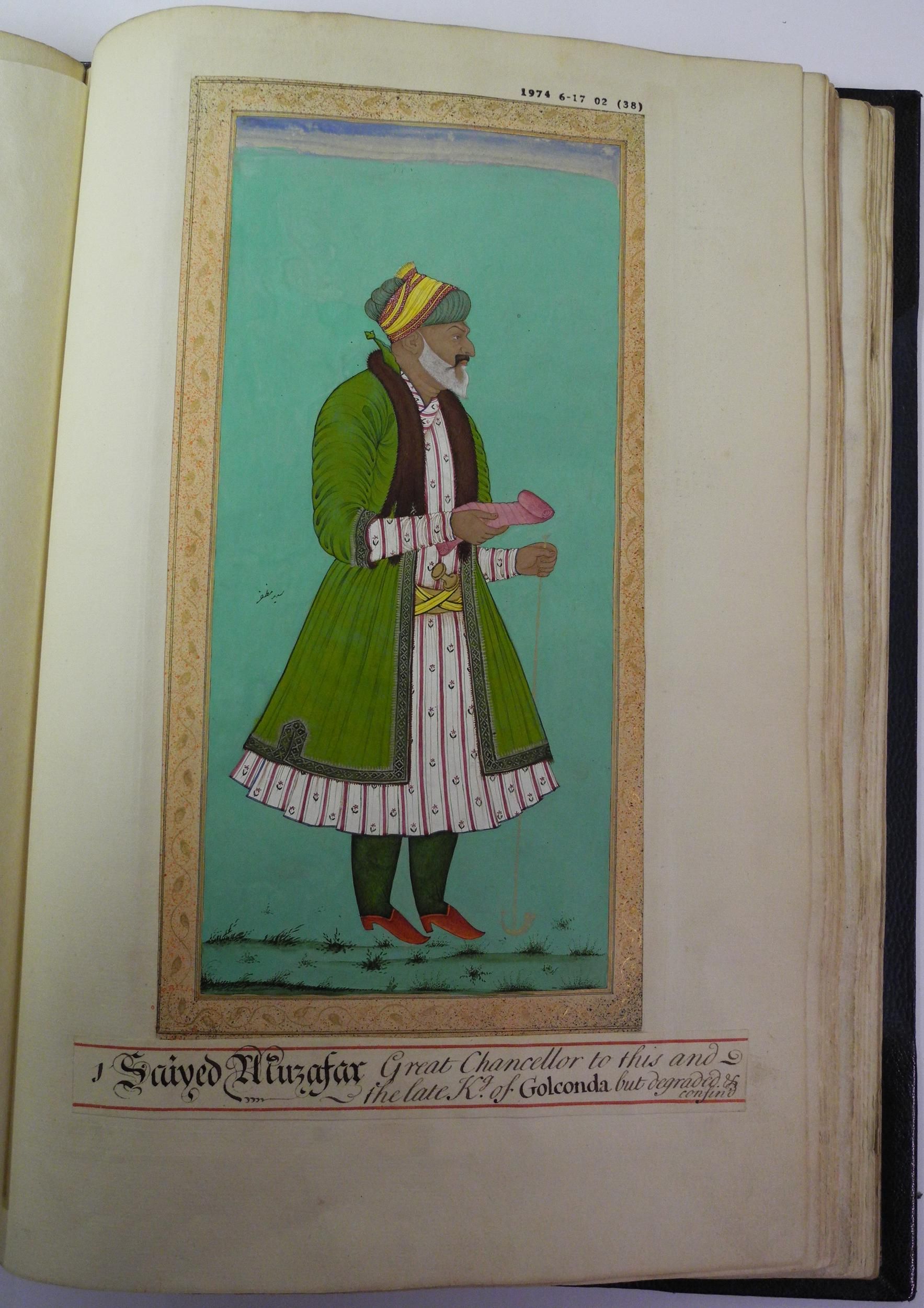 Ameri adds: “Since then, instead of being completely focused on grading papers, which is what I'm usually doing at this time of year, I've also been looking through the other miniatures in our collection to see if it's possible to identify any more subjects.” Brown says he want this research adventure “to be a reminder, to myself and to others, that there is still much left to learn in art, and many times the information lies just below our noses.”

He did not know how true this statement was. After our article was initially published, Yael Rice, an assistant professor of Art History and Asian Languages and Civilizations at Amherst College, reached out The Art Newspaper to point out that the name of the Man with a Flowered Coat was written on the painting. "The Persian inscription located near the subject's head clearly identifies him as Sayyid Muzaffar. He was anonymous only to those who are unable to read Persian," Rice says. "I would also add that these types of identifying Persian inscriptions are not at all uncommon; in fact, their occurrence is more the rule than the exception, and they are the primary means by which viewers of the past identified and recognised early modern portraits produced in South Asia."

A spokesman for the university says that another student, who is from Iran and who helped curate an exhibition of Islamic and Indian art at the museum last year, was able to read some of the inscription. But she had trouble translating the writing on Man with the Flowered Coat, "which is longer than most of the other ones and which she thought was partly in Urdu, so we decided to stick with the naming we had," the spokesman said.

"After Matthew came up with his identification, Professor Ameri asked [the other student] if she could go back and read the inscription, without telling her what Matthew had come up with. She was then able to identify the name and provided a tentative translation of the rest of the text," the spokesman explained. "We never had any experts in Medieval Persian look at the inscriptions."

Rice adds that "that there are tons of portraits like these in small institutional collections that lack specialists with the language skills needed to properly identify them. These are not exceptional circumstances, alas."

The university spokesman says that the museum "knew almost nothing about these miniatures beyond when they were given to Colby and a date that was assigned to them in the museum's records, and we suspected we wouldn’t be able to find out much more". He adds that a lack of documentation was compounded by the fact the collection of miniatures had not been studied much by anyone at the university before the students turned their attention to them.

Brown says that he “made the discovery late at night while my friends were fast asleep” and that he celebrated his find by “returning to my dorm to get the rest of a good night's rest”.

• This article was updated to include information raised by Indian art scholars, and translation work done on the miniatures by another student at the university.