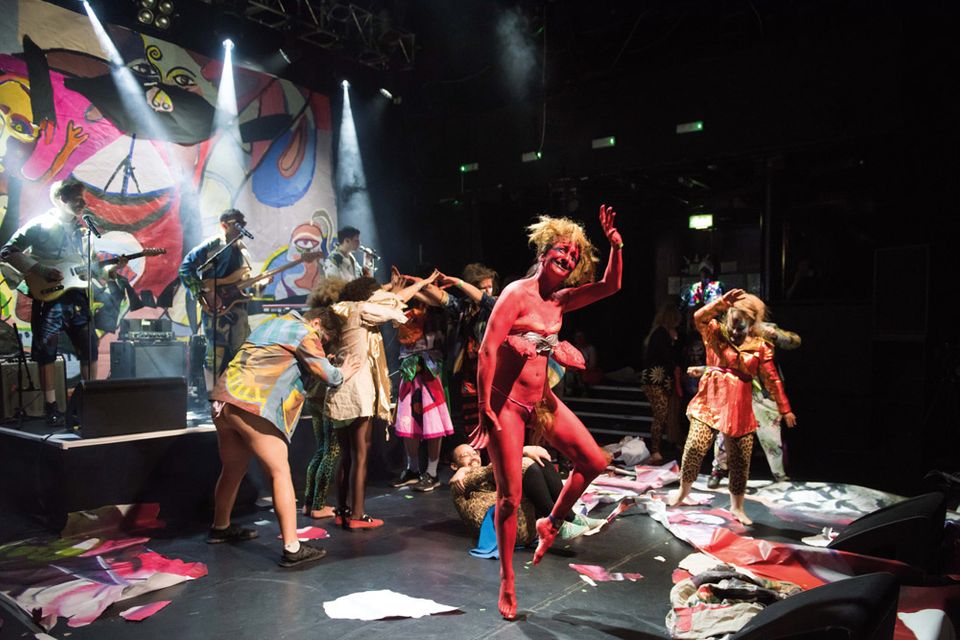 Marvin Gaye Chetwynd and her troupe of performers are renowned for letting it all hang out, but they were obliged to make some last-minute costume adjustments at David Roberts Art Foundation’s tenth anniversary performance extravaganza last night. It transpired that the venue—the concert hall and former theatre Koko in Camden—does not have a nudity licence and risks closure if all is bared. The ever-resourceful Chetwynd was undeterred, quickly restoring her modesty with a roll of masking tape. The evening, which also included a musical turn by Laure Prouvost, was deemed a huge success, with Roberts revealing plans to make the open-to-all event a regular fixture at Frieze. 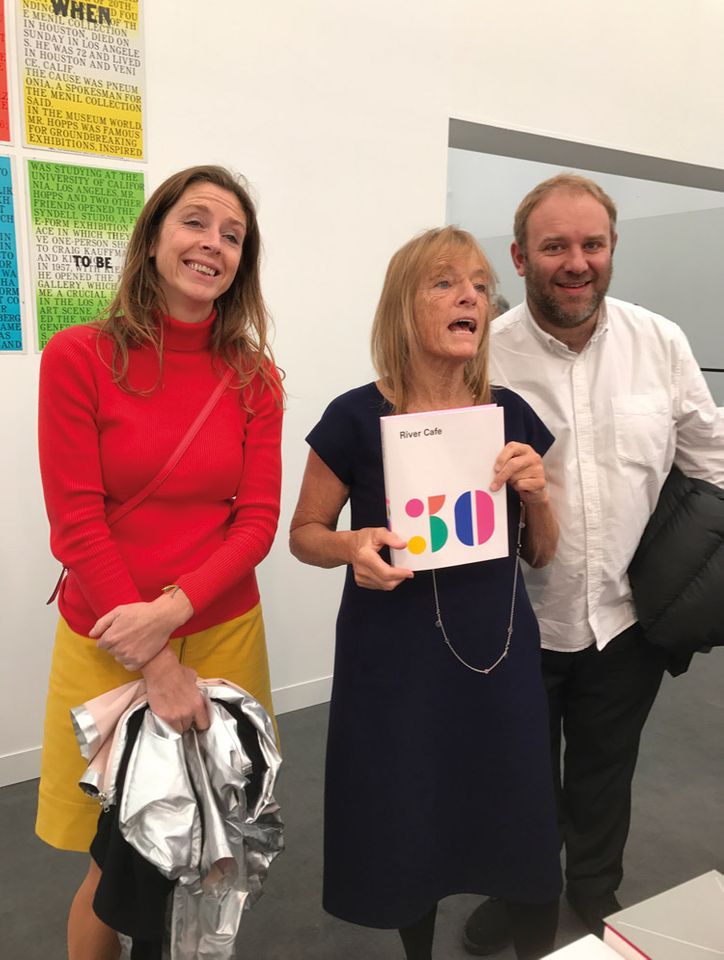 Artists are on the menu

The co-founder of the Michelin-starred River Café, Ruth Rogers, popped into Frieze London yesterday to promote a lavish new book of recipes, River Café 30. Rogers paid tribute to the top-notch artists who have customised menus at the Hammersmith-based Italian restaurant over three decades. Ellsworth Kelly drew a still-life on the back of one in 1991 and a self-portrait on another. Cy Twombly wrote “I love lunch with Ruthie” on a menu after a Sunday lunch in 2004. Ed Ruscha added “YUM” in tall red letters, while Michael Craig-Martin sketched a pristine teacup. And Damien Hirst, YBA and creator of the Pharmacy restaurants? He held off the pills and adorned his menu with spots and a spin painting. 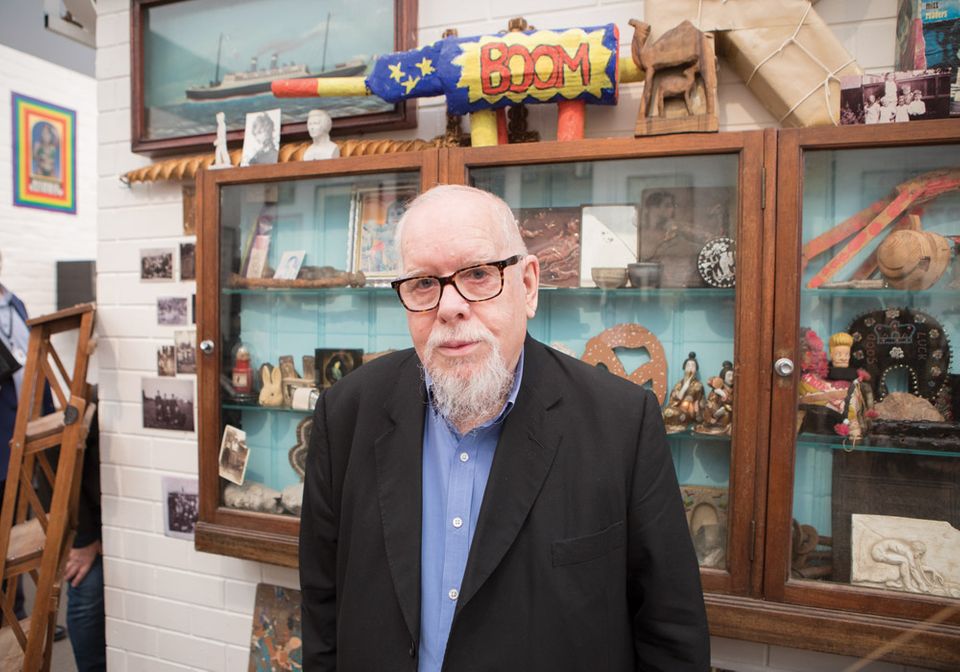 One of the most extraordinary stands at Frieze Masters is Waddington Custot’s loving re-creation of Peter Blake’s legendary studio, containing works from seven decades and an extraordinary array of found objects, curios, folk art and ephemera on every surface. The octogenarian pioneer of British Pop sees the display as a homage to the late Leslie Waddington and gave the gallery free rein to take whatever it wanted, down to his work table covered in books, papers, photographs and a toy train that belonged to his father. The immersive environment even reproduces the roof skylights, windows and iron pillars of the original building. On first sight, Blake declared that it was “like a strange dream”, admitting that his sense of dislocation was heightened by the fact that he hadn’t left the house since a pacemaker fitting last week. What a trooper. 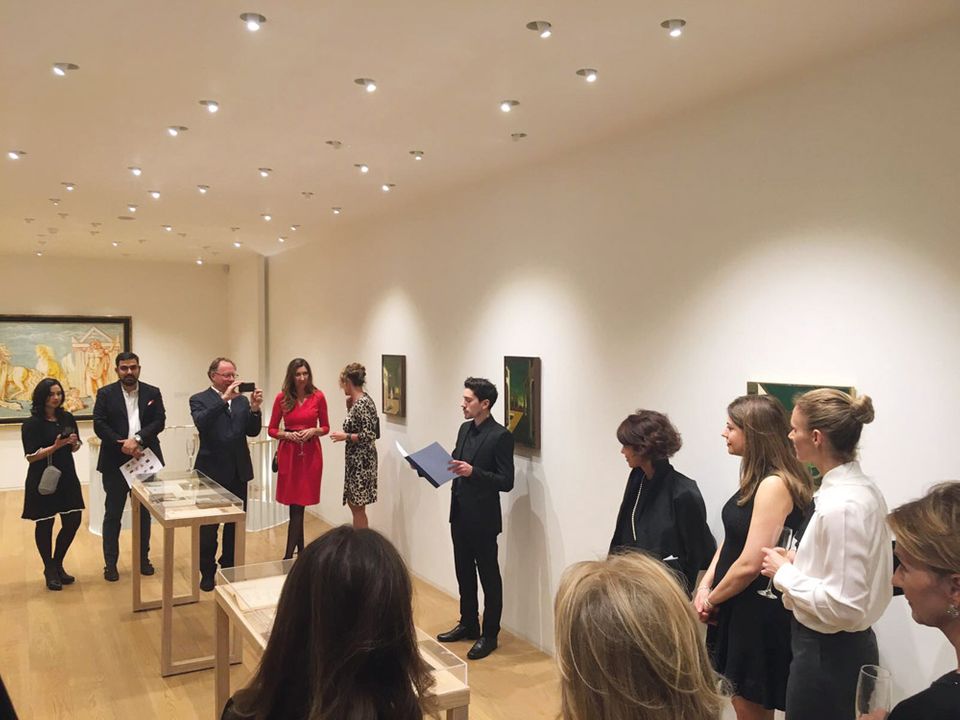 Guests at a dinner hosted by Tornabuoni Art earlier this week were also served a surprise poetry recital in the words of the Italian artist Giorgio de Chirico. The swanky bash marked the launch of Reading de Chirico (until 12 January 2018), the gallery’s show of more than 25 works by the Metaphysical art pioneer. Star paintings include Divinities by the Sea (1936) and Nude (1930), a recently identified portrait of De Chirico’s lover, Cornelia. “An actor was invited to recite, in both Italian and English, some of the artist’s sharp, punchy poems,” says Ermanno Rivetti of Tornabuoni Art, which is showing at Frieze Masters. Consider it a taster for the main course. “We’ve commissioned a new research project that links De Chirico’s writing and his art,” Rivetti says. Buon appetito! 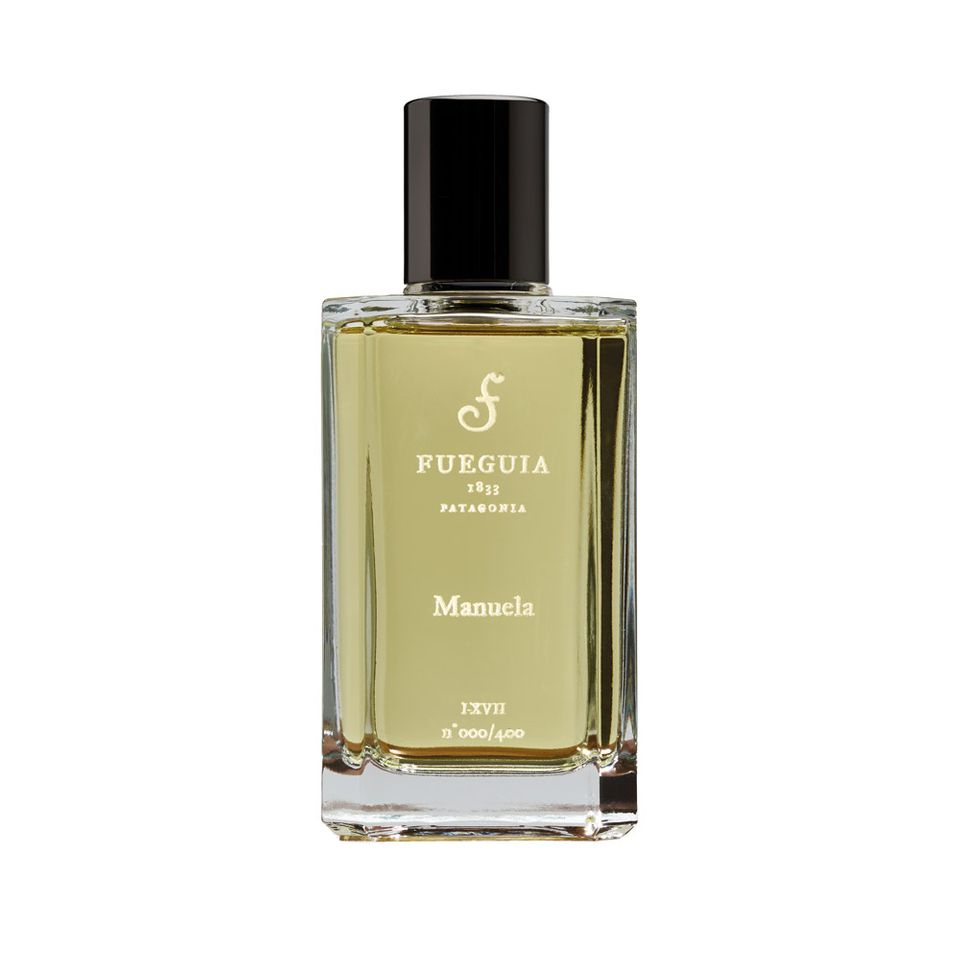 Scent of a Wirth

Manuela Wirth tends to be the lower-profile half of the Hauser & Wirth duo, with her husband Iwan usually taking centre stage in the gallery’s more prominent activities, but she seems ready to step into the limelight this week with the launch of her perfume, Manuela. The formula of the fragrance by the artisanal perfumiers Fueguia 1833 was apparently conceived “in a single act” by the company’s founder, Julian Bedel, when he met Wirth during a visit to the gallery’s rural Somerset outpost. The sweet scent distils plants found in its gardens with key notes of narcissus, cardilla and cedarwood. Manuela comes in a limited edition of 400 bottles, and is exclusively available from Hauser & Wirth and Fueguia 1833.