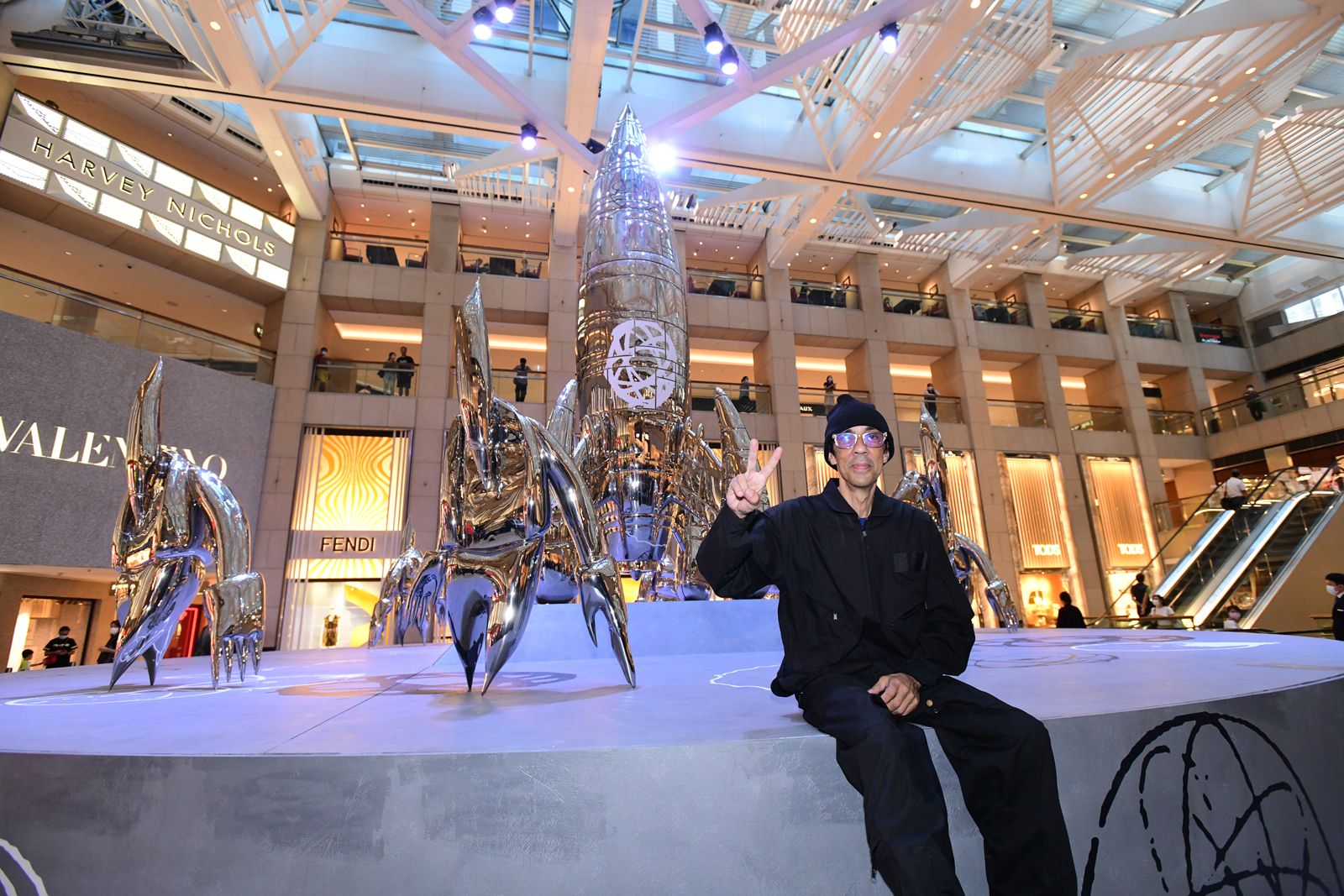 Futura at the opening of Futuraland in Hong Kong © AllRightsReserved

The large crowd of hip, youthful-looking visitors sporting Nike and Vans sneakers at the opening of the American graffiti artist Futura’s Hong Kong exhibition set an uplifting tone for the forthcoming weekend of auction previews loaded with Western names.

The show titled Futuraland, features a set of stainless steel sculptures including a six-metre tall “rocket” and seven alien-looking figures known as FL-006. It opened yesterday in the atrium of the upscale shopping mall Landmark in Central, the heart of Hong Kong’s financial district. Futuraland is the largest public installation by the artist formerly known as Futura 2000 and also the biggest in Asia. Editioned works priced between US$4,400 to US$6,000—which have been selling fast—were also unveiled at the mall’s Belowground section, where limited-edition items by Off-White, Billionaire Boys Club, and Sillything are on offer.

“The rocket has landed. This is exactly what we drew up and realised,” Futura tells The Art Newspaper about the works on show, which are expected to be collected privately following the two-week exhibition period. The show was originally planned for 2020 but postponed due to the Covid-19 pandemic.

The fully vaccinated 65-year-old artist (born Leonard Hilton McGurr) attended the opening after emerging from a 14-day quarantine. He was mobbed by fans who have been following him over the past two decades as well as top gallerists and art collectors. There were some new faces, too. “There are some younger kids who knew me from Instagram or other social media,” Futura says. 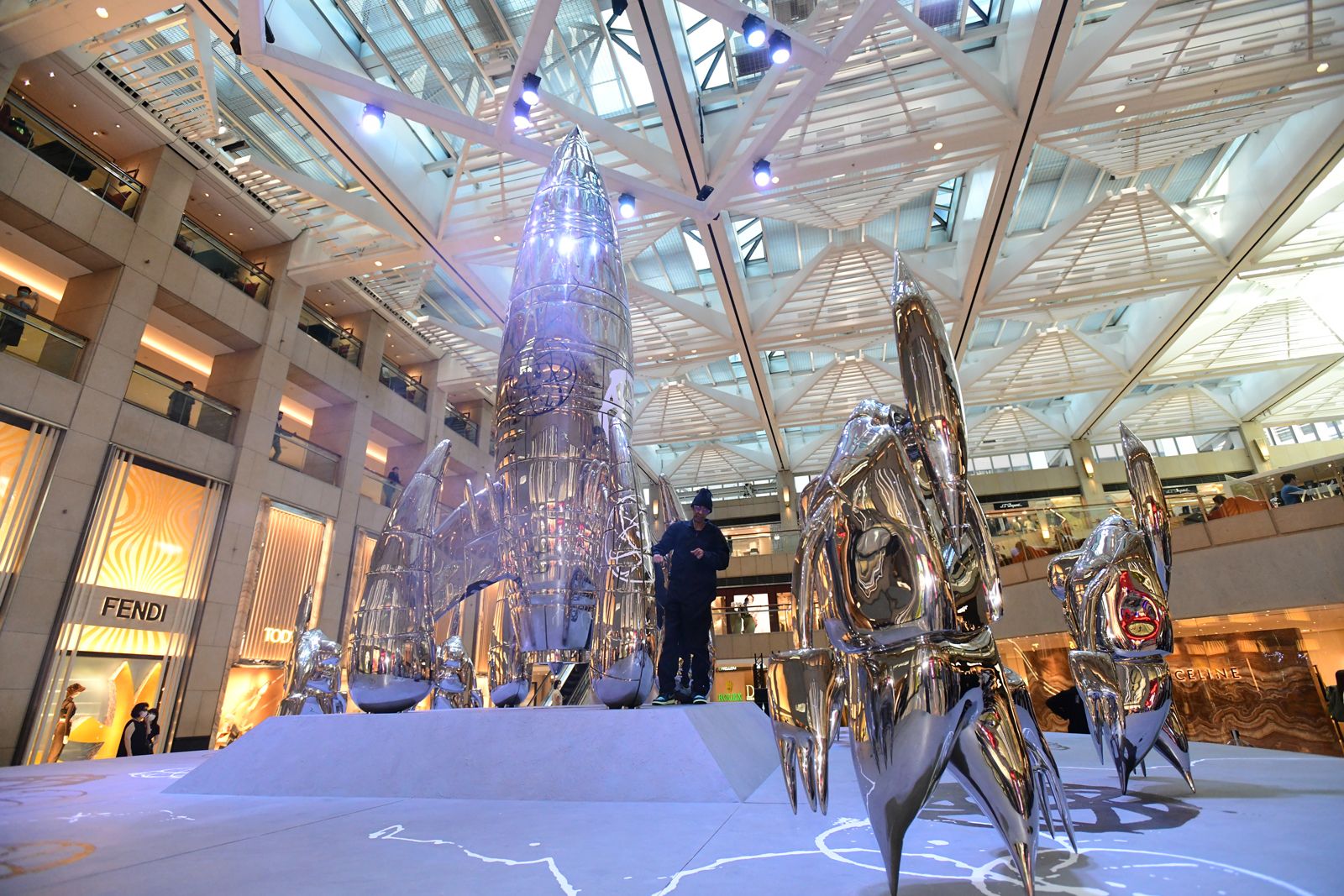 Futura at the opening of Futuraland in Hong Kong © AllRightsReserved

SK Lam, who leads the the Hong Kong-based creative studio AllRightsReserved that organised the exhibitions, says he intended to create an interesting show rather than target the “watches and sneakers crowd” when he first decided to collaborate with Futura.

“But the ‘crowd’ keeps evolving. Art today is so much closer to people’s daily lives. More people are going to galleries and museums. More people are going to Art Basel than shopping malls,” says Lam, who is also known for his long-term collaboration with Kaws. “Do people really like art, or are they looking for investment opportunities? We really don’t know. But the value of good art does go up and some may even make it to museums eventually.”

The opening of the Futura exhibition coincided with the preview of Phillips 20-century and contemporary art and design sales in collaboration with Poly Auction, featuring not just the usual big-hitters such as Yoshitomo Nara’s Missing in Action, Gerhard Richter’s Abstraktes Bild (940-7) and Banksy’s Laugh Now Panel A, which can be acquired with crypto currency. The sale also features works by artists who have been embraced by young Asian collectors such as George Condo, Kaws and a range of emerging Western names such as Loie Hollowell, Amoako Boafo, Joel Mesler and Tschabalala Self. Total estimates are in excess of HK$371m (US$47.8 m), according to the auction house. Sales will take place on 7 and 8 June.

Danielle So, the of head of the day sale, 20th-century and contemporary art at Phillips Hong Kong, says the rise of young Western contemporary names in the secondary market particularly in Asia has seen a significant shift.

“The region here has increasingly become internationally focused and their interest in the category is no longer restricted by age or nationality,” So says. “Collectors here are so much more open to new things, be it aesthetic or the artistry.”

Meanwhile, Sotheby’s is hosting a preview for its online auction Natively Digital: A Curated NFT Sale featuring works by Ryoji Ikeda, Pak, Don Diablo and Mario Klingemann at its Hong Kong gallery space. The sales and exhibition end on 10 June.