Even before the coronavirus pandemic, dealers big and small were experimenting with joint exhibitions. Now it is a matter of communal survival 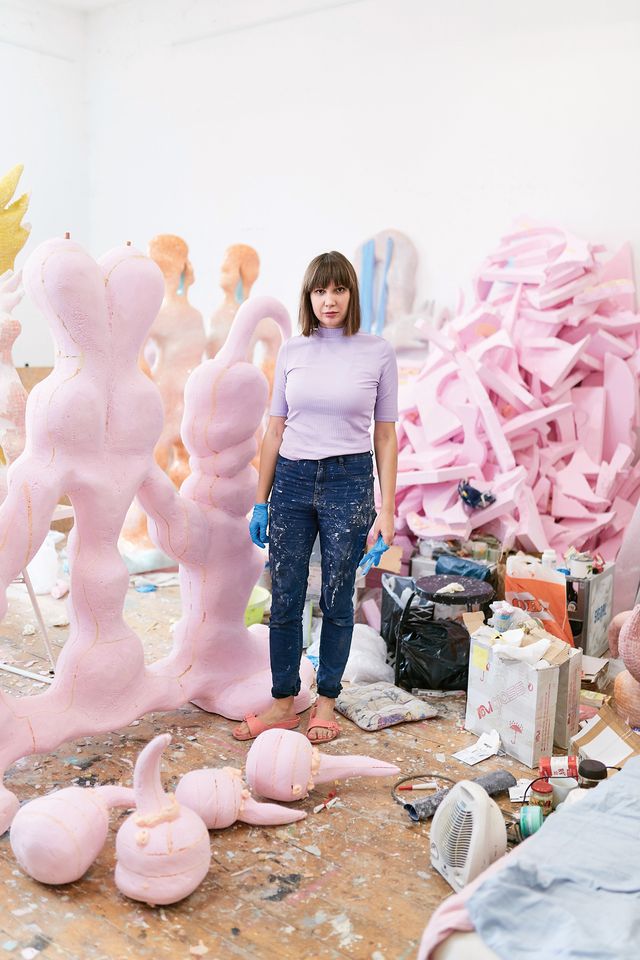 Just before the coronavirus (Covid-19) pandemic rocked the art world to its core, the biggest upset to the trade was the announcement that the $450m collection of the late Donald Marron would be sold across three galleries: Acquavella, Gagosian and Pace. Not only was it surprising that three rival dealers might join forces, it was doubly unexpected that such a high profile—and highly valued—collection would be sold privately rather than through one of the major auction houses.

Now, as the art industry prepares for a post-pandemic slump, galleries of all sizes are collaborating to help keep each other financially afloat.

Most visibly, David Zwirner has shared its online viewing room—one of the first of its kind to debut at the top end of the market, back in 2017—with 12 smaller galleries, including 47 Canal, Queer Thoughts and Bridget Donahue, among others, as part of Platform: New York, which opened on 3 April. Zwirner launched a similar initiative in London on 17 April, featuring Arcadia Missa, Emalin and others.

The London-based Huxley-Parlour Gallery is also launching its new online initiative Hosted By later this spring. The programme is similar to an online version of the Condo gallery sharing event, allowing participating dealers to host curated selections from three other galleries on their sites.

“As the current unprecedented crisis developed, I began to feel more and more strongly that galleries like mine ought to band together and support each other through it,” Giles Huxley-Parlour, the gallery’s co-founder, says.

“The London art world is a thriving but delicate ecosystem and we all have our artists, staff and suppliers to support,” he says. “This concept addresses the problem through a spirit of community, openness, collaboration and transparency.”

Emmanuel Di Donna, the director of New York’s Di Donna Galleries, agrees: “It certainly seems that we need to have a conservation of galleries,” he says. His New York gallery is currently hosting an online edition of a travelling exhibition of work by Maria Helena Vieira da Silva in collaboration with the Paris-based gallery Jeanne Bucher Jaeger and London’s Waddington Custot.

“[We must] work together as opposed to being individualistic, as a lot of the older generation has been,” Di Donna says. “I think the change is good and this business has the pressure from the auction houses and from the art fairs.”

Originally, Di Donna was planning to open the US leg of the show on 26 March and had the show fully installed when coronavirus-related closures disrupted the gallery’s plans, forcing it to postpone. Now, an unexpected and completely digital fourth stop for the show has been added, he says, as viewers can visit the exhibition online and see it as it currently hangs in Di Donna’s space.

“We can all benefit from this kind of collaboration a lot more,” Di Donna says. “Working together on ideas and marketing, and for sales, it’s a very good formula.”

Garth Greenan, owner of the eponymous New York gallery, agrees that there is a mutually beneficial aspect to participating in joint exhibitions, especially as a means of creating a network of support for galleries of different sizes. 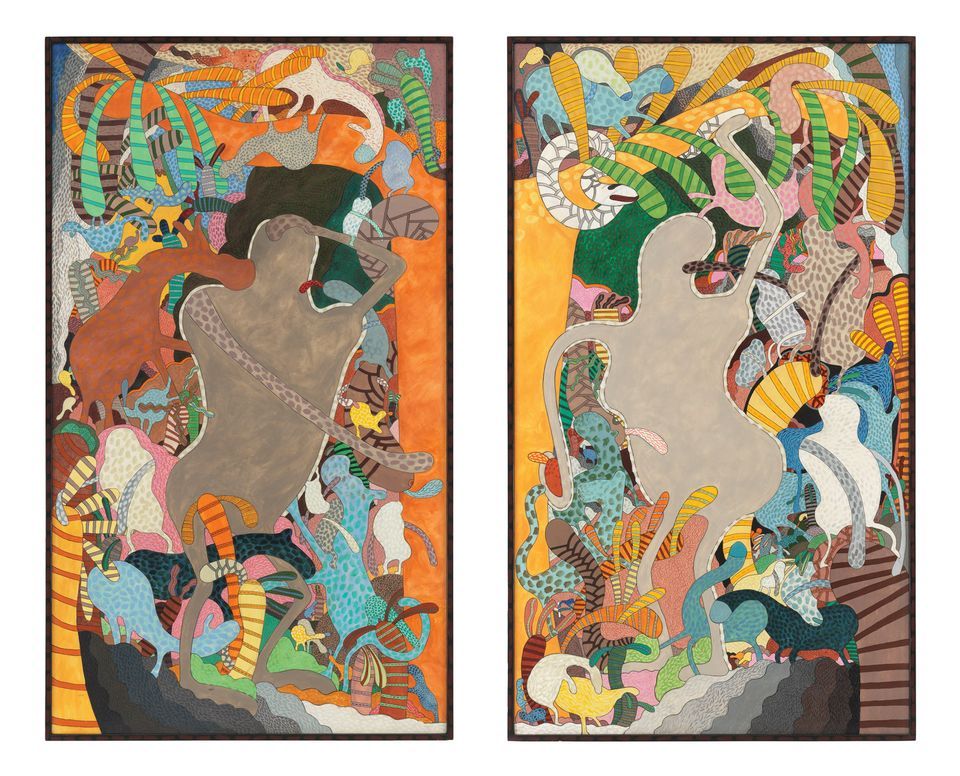 Gladys Nilsson’s Dipdick: Adam and Eve (After Cranach) (1971). Courtesy of the artist

The New York gallery teamed up with Matthew Marks to host an exhibition of work by Gladys Nilsson, Honk! Fifty Years of Painting, which closed just before the coronavirus shutdown. “I’ve been a Matthew Marks fanboy since I was in college,” Greenan says. “It’s been very fun and collaborative and easy and friendly and just great.”

He explains how the show came to be organised: “We incentivise [the other gallery] as much as possible. Not that commerce is their main incentive—Matthew didn’t need to do this, he did it because he really believes in the work, and believes in Gladys, and in us.”

Yet, especially when the galleries are of different sizes or ages, being clear about who gets what is key. With the Gladys Nilsson show, Greenan’s gallery maintains sole representation of the artist, and all the works shown at Matthew Marks’s gallery are consigned from Garth Greenan. The collaboration stoked rumours, however that Marks may try to poach Nilsson from his roster, which is a potential risk when there is a disparity in size between participating galleries.

Greenan refutes those fears. “If that was going to happen, he didn’t need to do a show with me,” he says. He points to the fact that the gallery has collaborated with Carol Greene of Greene Naftali gallery for the Painting: Now & Forever series of exhibitions for several years as proof of Matthew Marks’s intention to collaborate, not poach.

On how commissions and sales are split, both dealers say that each gallery gets a slice of each sale, regardless of where it occurred, but would not provide details. Greenan says that, before his own gallery, he worked with various spaces during joint exhibitions and, in each instance, how sales were split was organised differently.

Huxley-Parlour says sales from his initiative are split straight down the middle between the primary gallery and the work’s host gallery. Zwirner is not charging anything for galleries to participate in Platform, nor will it take a commission on the sales made.

“It’s not split equally, but we have a formula that works for everybody,” Di Donna says of his collaboration, though he confirms that the gallery that executed the sale would get the largest cut. “Every gallery benefits from a sale, whether they’ve done it [themselves] or not.”

Sixty Los Angeles art galleries have joined together to create an online platform to promote engagement with the local and international art audience. galleryplatform.la will present twelve gallery “viewing rooms” each week, with each gallery appearing on the platform once every six weeks. The platform will also include an editorial section featuring video visits with Los Angeles artists, collectors and gallerists. In addition to promoting sales, the intention of the platform is to serve as a forum for the dynamic Los Angeles art community. galleryplatform.la will be online by mid-May. In the meantime, gallery programs and art offerings will be featured on the gallery platform Instagram. The online gallery platform is the first project of what will become a Los Angeles Gallery Association, which will coordinate joint programming, gallery maps and itineraries, and other projects to enhance the art viewing experience in Los Angeles. ________ Ed Ruscha, Norm’s, La Cienega, on Fire, 1964 Oil and pencil on canvas, 64 ½ × 124 ¾ in (163.8 × 316.9 cm) © Ed Ruscha; Courtesy of the artist and Gagosian Collection of The Broad Art Foundation, Los Angeles ________ #galleryplatform #losangeles

The one-for-all mentality may have some staying power, even post-Covid. Just last week, 60 Los Angeles galleries announced a joint online initiative called GalleryPlatform.LA. Beginning 15 May, the communally owned and operated digital platform will feature virtual viewing rooms for 12 member galleries per week—which include established dealers like Gagosian and Matthew Marks to smaller galleries like Various Small Fires—and is the first initiative of the newly formed professional organisation known as Gallery Association Los Angeles (Gala). Additionally, the collective will extend GalleryPlatform.LA’s create joint programming throughout each year.

“We want to develop a new system beyond just the current crisis, which has really showed how much was not working about the old gallery model,” Various Small Fires director Sara Hantman told Artnet, which first reported the news.

Indeed, Di Donna predicts the relationship between the galleries will continue after the current show has run its course. He denies that this might lead to joint representation for Vieira da Silva, saying that such a collaboration would be, “just making sure we buy works together, or [the other collaborating galleries] can show the artist in a particular fair that I’m not in or [I can show her work in] a fair they’re not in. Then we can have a programme together for the coming months.”

Greenan agrees, adding: “There are a lot of snakes in the art world, but I think that there are also a lot of wonderful people. Everyone is not for everyone. So if you work well with someone, you can really support each other. And that’s what we need at a time like this.”