Nicole Eisenman, who is showing new works this week, on the “weird and wonderful” inspiration the city provides

With one phone call last autumn, Nicole Eisenman went from being an artist’s artist to a certifiable genius: she won the prestigious MacArthur fellowship, also known as the “genius grant” ($625,000 over five years, no strings attached). But the 51-year-old artist is not resting on her laurels. This month, she opens an exhibition at the New Museum (4 May-26 June) and her first show at Anton Kern Gallery in Chelsea (19 May-25 June). The gallery is also presenting new bronze sculptures, fresh from the foundry, at Frieze New York.

Eisenman manages to be “engaged with both the present and the history of art without being pedantic about it”, says the New Museum’s artistic director, Massimiliano Gioni. Her figures may be hunched over iPhones or drinking beer, but their creator “is indirectly confronting an entire history” of Western painting, Gioni says.

The Art Newspaper: This is your first survey in New York, where you’ve lived since the early 1990s. How does it feel to have a major museum show in your home city?

Nicole Eisenman: New York is always an exciting place to show. And since my friends and family live here, the feedback I get is more personal. The New Museum works very quickly, so in some ways, this show might look and feel a little looser. I’m more nervous about my Anton Kern show. Showing new work is an intense experience. 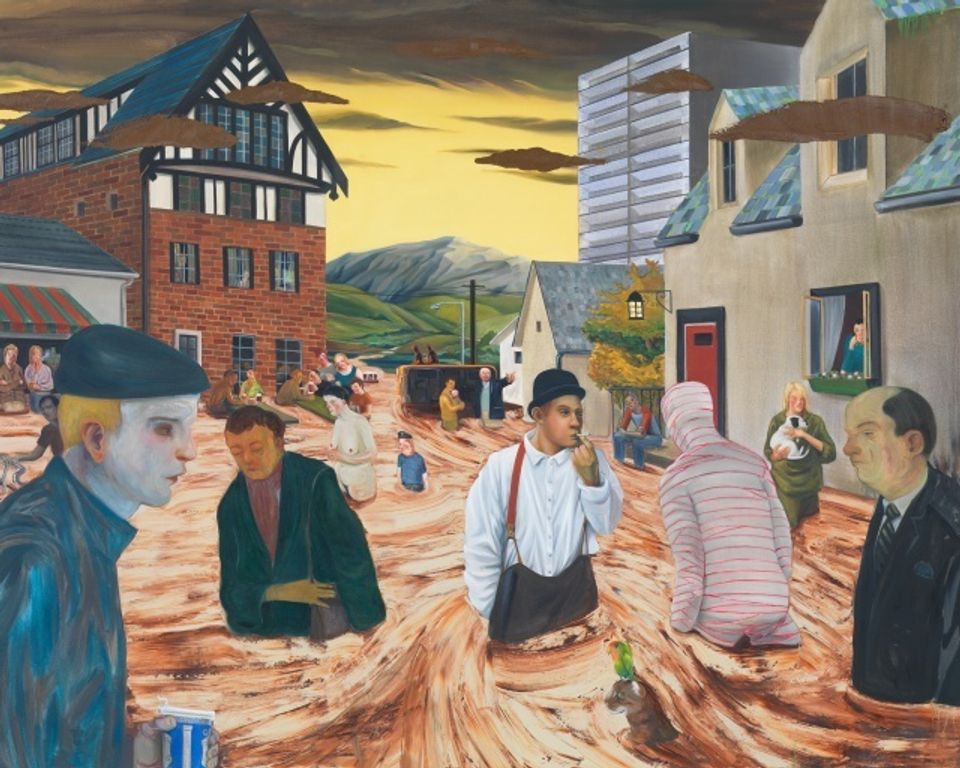 Your paintings of beer gardens are some of your best-known. What aspects of life in New York City did you want to capture in your new works?

I draw on subject matter from my daily experience, like hanging out with friends, making art, commuting, brushing my teeth, Skyping and so on. My life takes place here, so there are all these weird and wonderful moments that New York serves as a backdrop for. I love this city, but these paintings aren’t about this city per se.

In an interview last year, you said: “I’ve often felt like a second-class citizen in the art world because I represent bodies. I’ve felt that up until really recently—like yesterday.” Why do you think this attitude to figuration has changed, and how has that shift affected you?

Our bodies are the filters through which we understand the world, and I think people are starting to understand their bodies more and more as thinking machines.

Historically, of course, the head has been given prominence because that’s where the brain is. It’s a very masculine separation: the head is associated with rationality and intellectualism, while the body is feminised and subordinated. I’d really like to help undo this hierarchic dualism.

At this moment, when levels of greed, hatred and denial are at an all-time high, and so many things really do seem to be going wrong, things also simultaneously move in the opposite direction; people are learning something truthful about how we exist in the world, which is that we also think with our bodies.

There is a vast spectrum of ways of being in the world—people of classes, races, gender identities and abilities that differ from mine. By beginning to understand others, I get the gift of seeing the world with new eyes. That process of empathy begins in the body.

Many critics point to 2000 as a time when your work changed, becoming less preoccupied with classical forms and more experimental. What inspired that shift? Did you recognise it as a change at the time?

I wanted an adventure at that moment and so I shifted my approach. I started connecting to the materiality of the paint more than I had previously.

What is the biggest way in which your life has changed since receiving the MacArthur fellowship?

Not much has changed. At times, I feel exposed in a way I’m not that comfortable with. I can see how the spotlight could get in the way of the creative process, but I fiercely guard my realm of creativity. I create space in my head and in my studio where all that matters is what is interesting to me at that moment, and I keep the focus on the art.

Are you surprised by anything included in the show? For example, did you see anything that you had not seen for a long time that you really liked or disliked?

Why that one in particular?

It has the atypical element of collage in it and I’m interested to revisit that modus operandi—maybe I can learn something from myself.