When everything turned upside down: Georg Baselitz donates six pathbreaking paintings to the Met

Portraits date from 1969, a pivotal point for an artist departing from conventional motifs 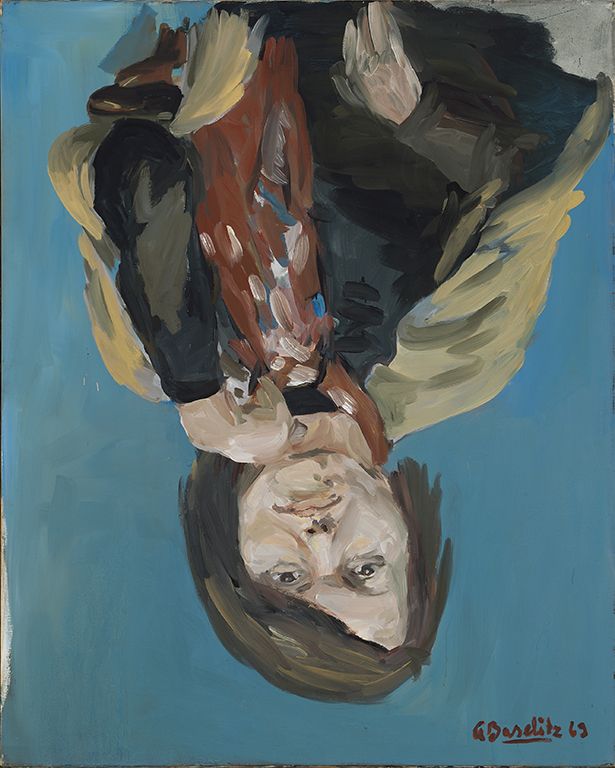 In a celebrated turning point in 1969, Georg Baselitz literally upended his mode of working by radically choosing to paint and display his subjects upside down. Now, Baselitz and his wife have donated six portraits from that pivotal year to the Metropolitan Museum in New York, where they will be unveiled today in the Robert Lehman Wing.

The gift, bestowed in honour of the Met’s recent 150th anniversary, is a coup for the museum and a reflection of the 83-year-old German artist’s affection for the institution, which has recently resolved to put Modern and contemporary art in dialogue with millennia of art history.

“He’s very interested in the context that the Met collection can provide,” Max Hollein, the museum’s director, said in an interview. “I think he was very excited and pleased.”

The six landmark paintings portray the artist’s wife, Elke, and friends in the German art world, including the art dealers Franz Dahlem and Michael Werner, the collector Karl Rinn and the journalist Martin G. Buttig. All of the works had remained in Baselitz’s collection since they were created in 1969.

Based on Polaroid snapshots turned upside down, they offer museumgoers an opportunity to reflect on the artist’s decision to destabilise the viewer’s perspective, thwarting the ability to discern a firm narrative or content and calling attention instead to the possibilities of painting as a medium. At the same time, Baselitz was embracing genres that he had previously avoided like portraiture, nudes and landscapes.

“To have a group of paintings captures a moment in time: the people he was working with, a fuller picture,” says Brinda Kumar, an assistant curator of Modern and contemporary art at the museum who organised the viewing, Georg Baselitz: Pivotal Turn. “I think it’s really momentous because we don’t often get work from early in an artist’s career that the artist has held onto.”

The Met had previously owned three paintings by Baselitz and 18 works on paper.

Born Hans-Georg Kern in 1938 in Deutschbaselitz in what would become East Germany, Baselitz studied in East Berlin at the Academy of Fine and Applied Art, which indoctrinated its students in the tenets of Socialist Realism and which eventually expelled the artist in 1957 for “sociopolitical immaturity”. He decamped for West Berlin, changing his name to Baselitz, and completed his studies at the Academy of Fine Arts in 1962. Early paintings In his Heroes and Fracture series depict raw, fragmented and distorted figures in natural landscapes and evoke the trauma of the Second World War.

His radical shift in 1969 to so-called “inverted” painting attests to his desire “to go his own way without anyone telling him what to do”, says Hollein, who became acquainted with Baselitz while organising a major survey of his Heroes paintings in 2016 at the Städel Museum in Frankfurt. “He didn’t care what was in vogue or what the majority of artists were doing.” The move also distanced him from the dichotomy that existed then between abstraction, associated with capitalist West Germany, and the Socialist Realism of East Germany.

In West Germany after the Second World War, “there was a feeling that you can’t paint figuratively anymore,” Hollein says, but Baselitz was determined to paint figuratively while nonetheless expunging narrative content from his works.

Kumar says that Baselitz’s upside-down strategy became a through line in the artist’s oeuvre and liberated him to find other opportunities to experiment in a career that also extended to printmaking and sculpting.

She cites the importance of the newly donated Portrait of Elke I, the first that the artist painted of his wife, whom he had met in West Germany as a student in 1958. “It remains a touchstone, and she goes on to become the most recurring subject in his practice,” Kumar explains. “He needs to keep going back to it in spite of himself.” Decades later, she notes, he even revisits the composition of the 1969 portrait: “It’s suggestive of an evolving relationship with the subject but also to painting.”

Baselitz acknowledged that his portraits of his wife were complicated: “I don’t illustrate Elke. If anything, I try to remove her, but I usually can’t,” an exhibition label for the painting quotes him as saying. “She comes into the process whether I want it or not, through the back of my mind.” 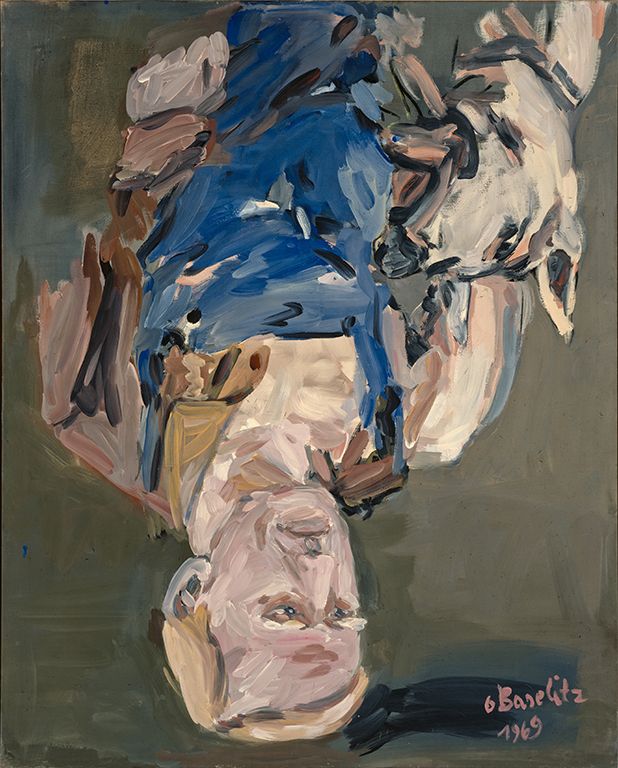 George Baselitz's Working Man from Dresden: Portrait of M.G.B from 1969 The Metropolitan Museum of Art, Gift of the Baselitz Family, 2020, © Georg Baselitz 2021

Kumar also points to Working Man From Dresden: Portrait of M.G.B., a portrayal of Buttig, a journalist who she says wrote a catalogue essay for one of Baselitz’s early exhibitions. The dog in the portrait “connects back to elements of the Fracture paintings,” she says. “He’s working through muscle memory but developing a new direction.”

Meanwhile, the curator is fascinated by Da. Portrait (Franz Dahlem), a painting of the German gallerist who first exhibited the 1969 paintings. It “strikes me as really intriguing because it really shows how he’s approaching it not as a straightforward portrait: you see the loose brushwork and the focus on form and line, and the emergence of the figure is almost incidental,” she says. “It’s one of those things that opens up some questions, and I’m still thinking through them.”

The gift has a broader political resonance: Sheena Wagstaff, chairman of Modern and contemporary art at the Met, suggests in a statement that “Given the flourishing in recent years of figuration”, the six portraits “will hold deep currency for younger generations of artists who, like Baselitz, continue to value America as a symbol of democracy”.

Against the backdrop of the recent political turmoil in the US, that remark may appear unusual. But the artist, who lives in Germany and Switzerland, was quoted by the Met as saying: “Elke and I hold a special place in our hearts for the Met and New York. With the donation, Elke and I also want to express our very special connection to the USA. The country has always been a symbol of freedom for us.”

The six paintings will remain on view through 18 July. 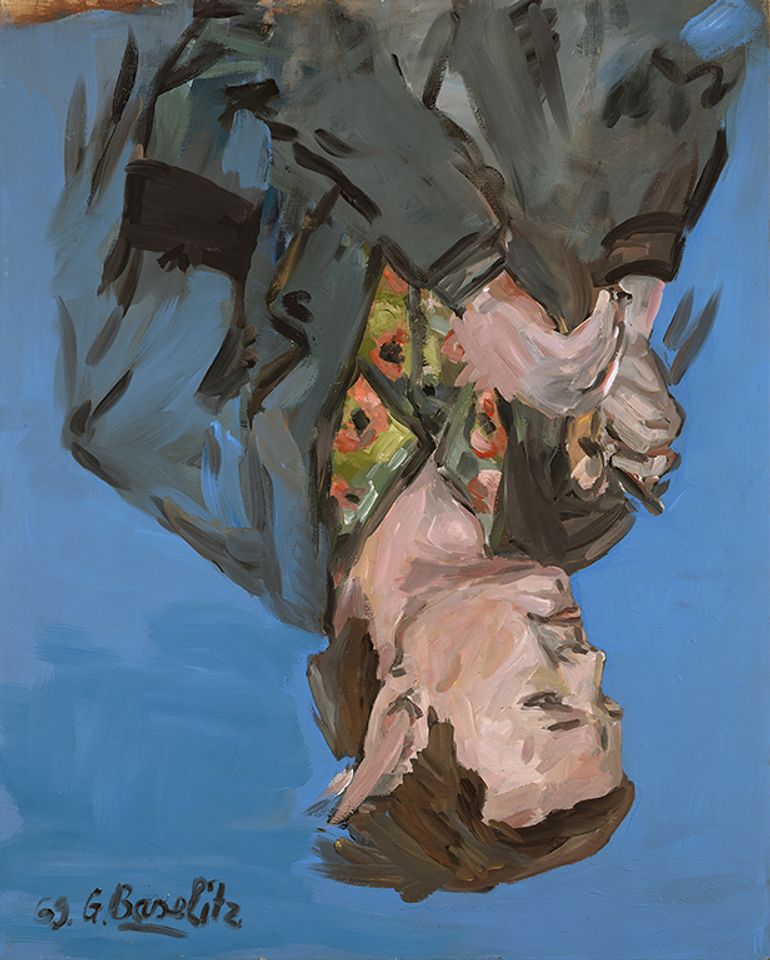