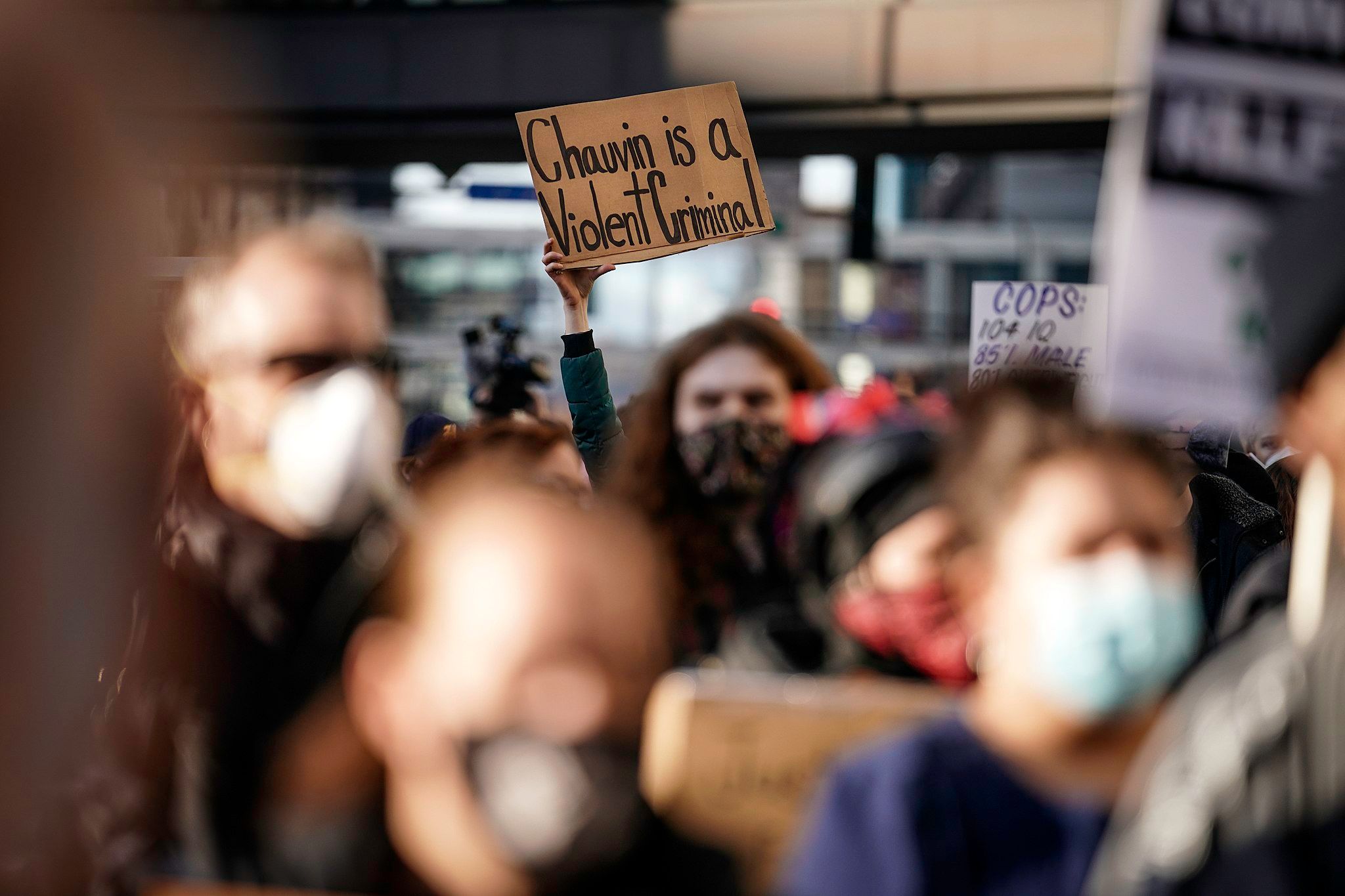 A protester holds a "Chauvin is a Violent Criminal" sign outside the Hennepin County Courthouse in downtown Minneapolis, Minnesota, at a protest marking the trial of former Minneapolis police officer Derek Chauvin on Monday 19 April Photo: Lorie Shaull

US museums have expressed relief at the guilty verdict, announced yesterday, of former police officer Derek Chauvin for the murder of George Floyd, but stressed there is still a long way to go to achieve racial justice in the country. “This is a step in the right direction, but there is still much work to be done to confront the devastating reality of police brutality and systemic racism,” the San Francisco Museum of Modern of Art (SFMoMA) said in a statement.

This is the first time a white police officer has been held accountable for the murder of a black man in the state of Minnesota. 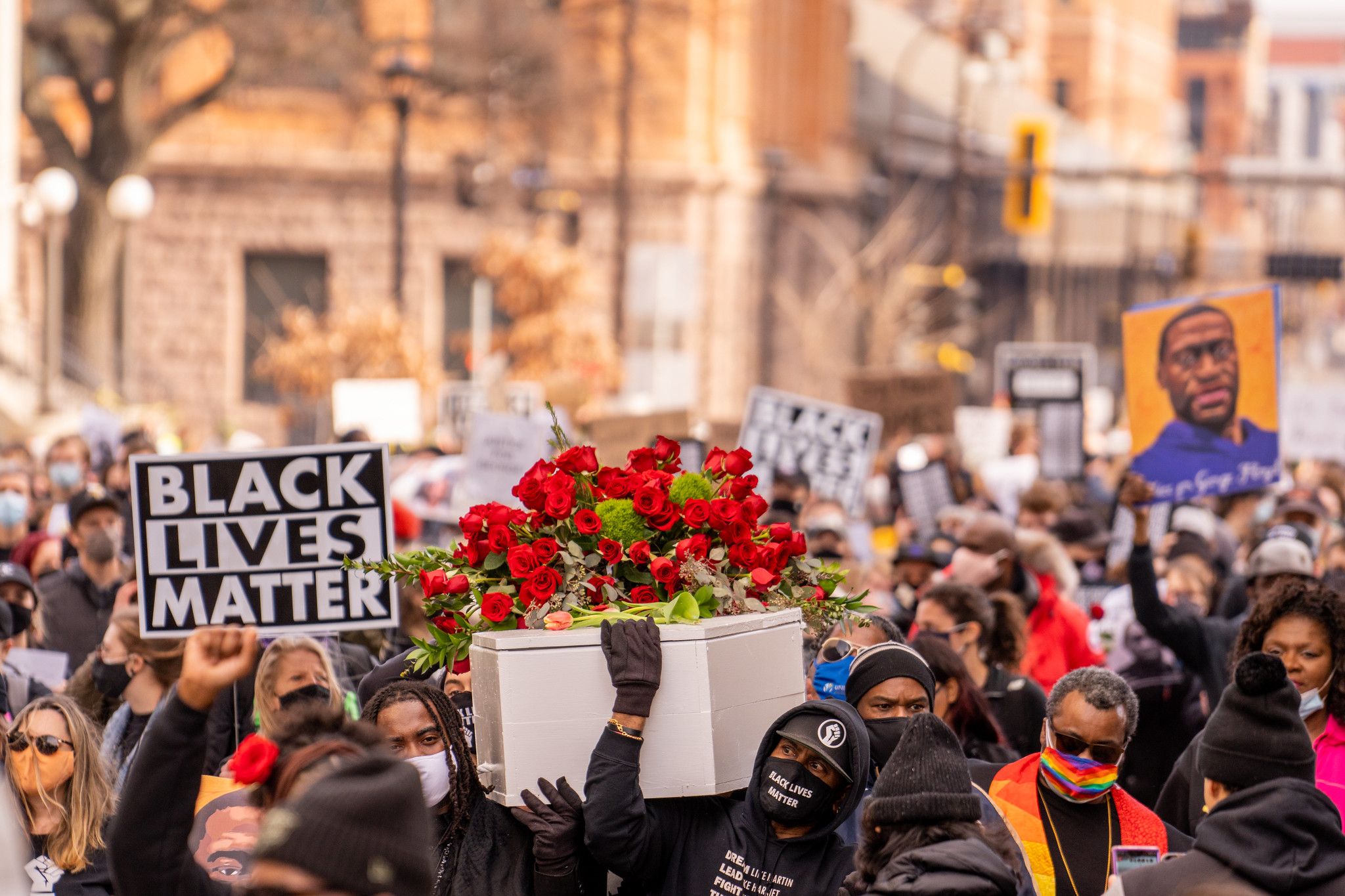 Thousands attended a march in Minneapolis on 7 March, the day before the start of jury selection in the Derek Chauvin murder trial Photo: Chad Davis

In a statement, SFMoMA described the current moment as “a very sad time in our country’s history”. It added: “The Derek Chauvin trial is at the top of all our minds; with a guilty verdict on all three counts for George Floyd’s murder, we can pause for a moment and feel a sense of relief, knowing Chauvin will be held accountable.”

The West Coast museum's statement went on today: “We are still confronted with the devastating reality of police violence targeting Black and Brown Americans. The recent deaths of Daunte Wright in Minneapolis and Adam Toledo in Chicago are heartbreaking.”

Wright was shot and killed last week by a police officer, Kim Potter, in Brooklyn Center, a suburb of Minneapolis; Potter has been charged with second-degree manslaughter. Toledo was shot by officer Eric Stillman on 29 March during what Chicago police called an “armed confrontation”. SFMoMA also condemned the recent hate crimes against Asian American and Pacific Islander communities, saying the institution “has zero tolerance for racism in any form”.

Speaking about the death of 15-year-old Ma’Khia Bryant, who was shot and killed by a white police officer in Ohio moments before the Chauvin verdict came in, Jasmine Wahi, the Holly Block social justice curator at the Bronx Museum, said on Instagram: “I won’t say this is too much, because it doesn’t need to be said to be true. Because it’s always too fucking much. Because we know it’s too much but it’s also more of the same.”

Wahi added: “Fuck this false narrative about ‘JUSTICE’. FUCK the police. FUCK this ‘justice’ system. We talk about children being our future. But what about the children you, the state, snatch away? What about the Black and Brown children? Are we not the future?”

In relation to the Chauvin verdict, she said that this is “not justice. But a step in the right direction. Thinking of George Floyd’s family today. Holding them in the light.”

On its Instagram account yesterday, the New Museum in New York posted a piece by Carrie Mae Weems from its show, Grief and Grievance: Art and Mourning in America (until 6 June). Weems’s work, from her 2016 All the Boys series, shows a portrait of a Black man in a hooded sweatshirt matched with a text that evokes a police report—a response, the museum says, “to the persistent killing of Black men and women by various authorities”.

The museum’s post also quotes Weems as saying: “Photography can be used as a powerful weapon toward instituting political and cultural change,” reminding us how the camera on murder witness Darnella Frazier’s phone—as well as her gut-wrenching testimony—helped to convict Chauvin and change history.

The Brooklyn Museum posted a statement on Instagram, saying: “As we continue to experience escalating violence, racism, and divisiveness sweeping our nation—all amid a global pandemic and as the country awaits justice for George Floyd in a historic verdict—many of us are seeking ways to come together and process feelings of distress and anxiety.”

Last summer, however, museums were accused of tokenism, hypocrisy and fake solidarity for sharing online statements and social media posts denouncing discrimination, sometimes without mentioning Floyd’s murder or the Black Lives Matter movement. At the time of writing, many US institutions had not posted a response to the verdict.

A number of high-profile artists also reacted online, including Kaws who posted the word “Guilty” on Instagram. Another succinct response came from the UK artist Thomas Price who wrote in an Instagram story: “Guilty, guilty, guilty. It’s a start…”. The New Orleans-born Rashaad Newsome wrote “Rest” underneath an image of Floyd on Instagram while the New York-based Jordan Casteel strikes an emotional note in her Instagram post: “When my mom calls me crying and says… ‘my sobs would sound the same no matter the verdict’. To be Black in America.”