George Shaw: 'I make no distinction between great painting and great TV'

On The Art Newspaper podcast, the British painter discusses the diverse influences, from Hockney and Rembrandt to the children’s television series Grange Hill, that have informed his paintings of the estate where he grew up 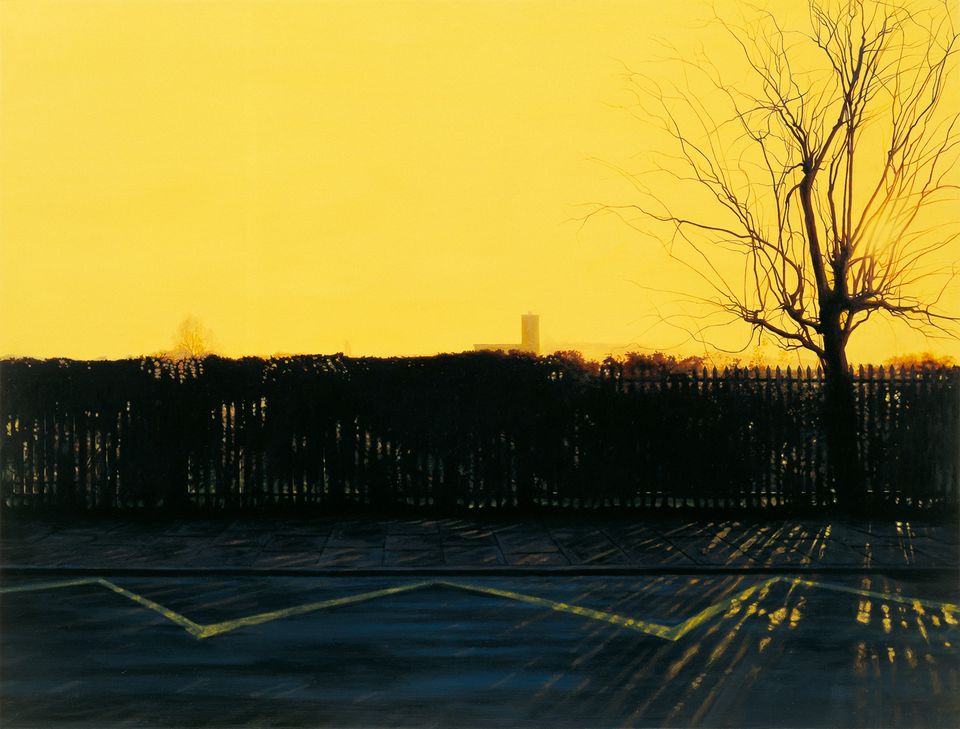 The show of George Shaw’s work now at the Holburne Museum in Bath confirms that is one of the most distinctive painters of his generation, connecting in different ways to the history of British painting across the centuries, from Constable to the Pre-Raphaelites and Francis Bacon and David Hockney. On The Art Newspaper podcast he discusses his connection to earlier painting but also his profound engagement with the arts in their broadest sense.

Born in 1966, Shaw came to prominence in the late 1990s with his depictions of the estate on which he grew up—Tile Hill in the English Midlands, close to Coventry. The show, a smaller version of the exhibition which began at the Yale Center for British Art last year, features 20 paintings, which capture different views of the estate, from his own home to banks of garages, existing and derelict pubs, a care home and the woods at Tile Hill’s fringes. They’re loaded with personal significance for Shaw, yet redolent of broader societal issues.

The works, realised in enamel paint on board and more recently on canvas, are based on photographs, leading some to suggest Shaw is working in the tradition of photorealism—but he baulks at the idea. “Photorealism is a word that has no currency with my work whatsoever,” he tells us on the podcast. “It’s a period of art history that was very short-lived and when you see those works they bear no relation to my works. I go to great lengths to eliminate the photographic trace in my paintings. So, for example, a lot of the photographs I make, verticals and horizontals are curved, but you very rarely see them in my paintings. They’re nothing to do with the colour of a photograph, which is what photorealism is—it really wants to be a photograph. I would like my paintings to eliminate photography.”

But Shaw does engage with the Realist tradition, both in his style and his subject matter. “Realism is something that comes from a variety of points in art history, for me,” he says. “Not only does it tag on to how something looks, but it also describes the thing being depicted. So if you think about 19th-century painting, depicting working people, for example: Courbet depicting peasants or even the Pre-Raphaelites depicting the world around them, as in the painting Work [by Ford Madox Brown], that’s about realism more so than how it’s depicted, for me.” Shaw’s connection to Realism was about “wanting to have a truth about my own experience of the world, as well as it having to look like the world”.

That said, his work also deliberate subverts realism in its often vivid, even hallucinogenic, skies. In Ash Wednesday, 8.30am (2004-05), for instance, the top half of the picture is a strident, hypnotic yellow. “If anything it’s an abstract painting—it’s very much like that American modernist [idea] “ah, just straight out of the can”—poured out and moved across,” he explains. “And then it has this curious scene depicted in front of that abstraction, which is quite flat, it looks like a theatrical flat. And any depth is created by things like the zigzag lines in the front.”

In this playful to-and-fro between observed reality and abstraction, Shaw evokes a long tradition in modern British art, a crucial factor in works like David Hockney’s swimming pool paintings and Francis Bacon’s Jet of Water (1979), for instance. “You could say it’s an exercise in visual representation, in terms of flatness and depth and things like that,” Shaw says of the Ash Wednesday painting. He relates it to Hockney’s 1960s riffs on abstraction, which developed on “his early excitement when he was a child and a teenager about how easy and how difficult it is to trick and deceive the eye and deceive the viewer in terms of making pictorial representations”. Shaw says that he enjoys these “gamey” aspects. “On the other hand,” he adds, “it’s a dragged up image from my childhood, which for me is the point of making the picture in the first place—I’m not solely interested in games and tricks that are being played in the studio.”

When discussing his work, Shaw is as likely to refer to writers like James Joyce or Philip Larkin, filmmakers like Ken Loach or the comedian Tony Hancock. “It all goes in the same point as far as I’m concerned, any form of separating one art form off from another art form is as ludicrous as separating it into high and low culture. Who defines these things? Who chooses these things? And who chooses the choosers of these things? For me it’s a kind of bigotry designed to keep people in their place. So I make no distinction between the greatest paintings in the world and the greatest bits of TV in the world.”

The way in which these influences appear in his work is through Shaw’s pencil drawings, some of which feature in the Holburne show. “For me it’s the underdrawing, the undergrowth of the work,” he says. “They’re like studies for some of these finished paintings, really. Although my drawing of Philip Larkin or Boris Karloff as Frankenstein’s monster might not look like a study for a dilapidated pub, [they] go quite well to describe a dilapidated English pub. There are so many things rattling round as influences, from James Joyce to [the 1970s and 1980s children’s television programme] Grange Hill, that drawing is a way of making everything the same.”

Even though his paintings only rarely feature people, there is a profound sense of human presence in them—and not just in the ghosts of Shaw’s influences that stalk them. He says he now thinks of his body of work “less as paintings of a particular place and more as a series of paintings of a particular person”. And again he evokes the art of the past. “My favourite series of paintings, if I was on Desert Island Paintings, would be Rembrandt’s self-portraits,” he says. “I was envious of them as a child, they still enchant me and mystify me. And I know that you would never be able to accomplish that, no other artist could, I don’t think. But I think, subconsciously, that’s what happened [in Shaw’s work]: that really, you’re painting your own decline. And in the same way that Rembrandt’s self-portraits are a mirror of his society and the way in which that changed, so these paintings of a place which has changed through nature and through political will is also a representation of a person that came from here, who’s growing a little bit older.”

You can hear the full interview on The Art Newspaper podcast, in association with Bonhams, which you can also find it on iTunes, Soundcloud and TuneIn, or wherever you usually listen to podcasts. This episode also includes an interview with Tracey Emin, exploring her much acclaimed show at White Cube Bermondsey, London.